Drax is planning to convert half of their coal power station (the UK’s biggest) to burning biomass – most of it imported wood. They are hoping this will secure the long-term future of the power station and allow them to continue burning both vast amounts of coal and imported wood for decades to come. We are protesting plans for this big biomess and invite you to join us at their AGM on the 24th of April. 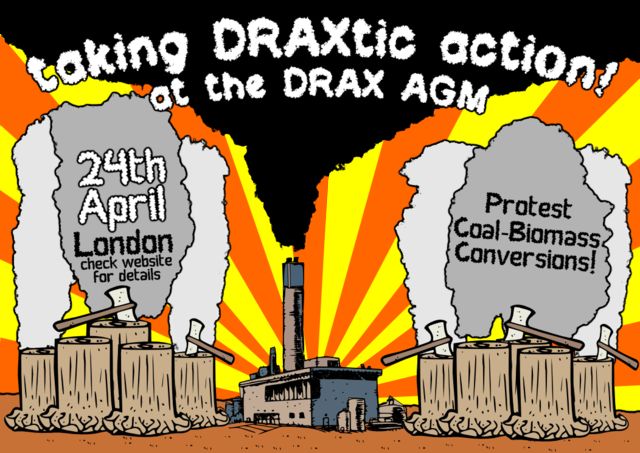 In July 2012, Drax confirmed that it plans to convert half of its capacity to burning biomass – this will make Drax by far the biggest biomass-burning power station in the world. If this goes ahead, Drax will be burning pellets made from up to 15.8 million tonnes of biomass – nearly all of it wood – every year. Since the UK’s total wood production is only 10 million tonnes a year, virtually all of the wood Drax needs will have to be imported.

Drax already burns biomass which comes from Canada, the USA, Portugal and South Africa. Highly biodiverse forests are being clearcut in North America to make wood pellets for UK power stations. This trend is likely to worsen as the industry expands.

In South Africa, communities are losing their land and access to water because biodiverse grasslands are being destroyed for monoculture tree plantations, some of which now supply Drax. As demand for wood pellets by Drax and other energy firms grows, so too will human rights abuses in the global South as a result of land and water grabbing for biomass.

Add to this the fact that power stations burning wood emit up to 50% more carbon than ones burning coal. Companies and policy makers ignore carbon emissions from burning biomass, claiming that new trees will grow back and absorb it. Yet it tends to take decades before that can happen. And when forests are destroyed and turned into monoculture biomass plantations, much of that carbon will simply stay in the atmosphere.
It is Lucrative Way of Keeping Old, Polluting Power Stations Running for Longer..

Energy companies like Drax are not investing in biomass conversions because they want to burn less coal and save the planet. Instead, they are trying to get round EU air quality regulations and thus keep their old, polluting power stations running indefinitely – while cashing in on lucrative subsidies. Although biomass burning is as polluting as coal burning, it emits less SO2 – and Drax does not currently meet EU limits to SO2 which will be binding from 2016. A partial biomass conversion is likely to allow some power stations to burn coal for much longer than they would otherwise have been able to.
And it’s hugely profitable

Drax has been able to persuade the Government to grant generous subsidies towards biomass conversions, securing £672 million for itself in one year alone. These subsidies will be paid for through our fuel bills, as energy companies pass on the costs to the consumer. This comes at a time when, although energy companies are making record profits, communities are experiencing rising fuel poverty and difficulty paying their bills.

Replacing one destructive fuel with another is not the answer

Coal and biomass destroy communities, ecosystems, people’s health and the climate. The impact of big biomass mirrors that of the coal industry, and painting these industries green is not the solution. We need solutions which focus on an end to large scale coal and biomass.


Read more about the full scale of the problem here:

Find out how to take DRAXtic Action here:

And to find out more about the Green Bank and our efforts to stop more funding for biomass, see Banking on Big Biomass here: