One of over 60 protests around the world against the continued detention of Bradley Manning, incarcerated for blowing the whistle on war crimes. 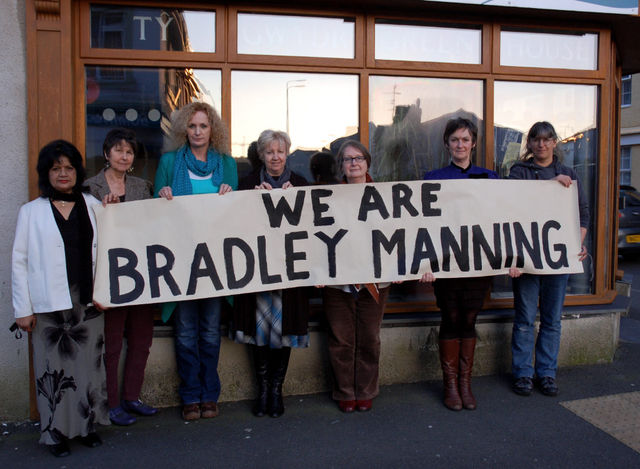 Whistleblowers and supporters in Wales stand with Brad 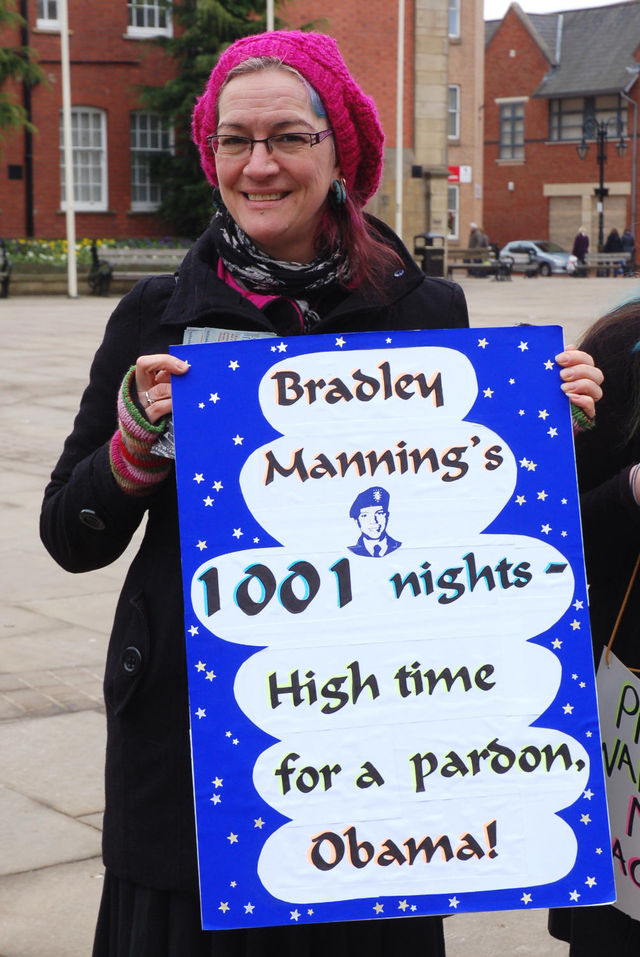 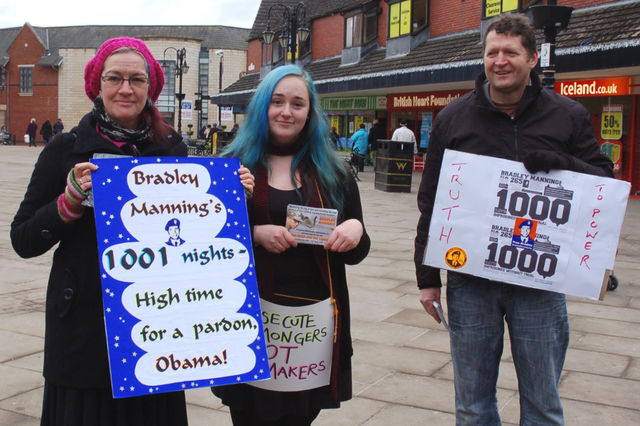 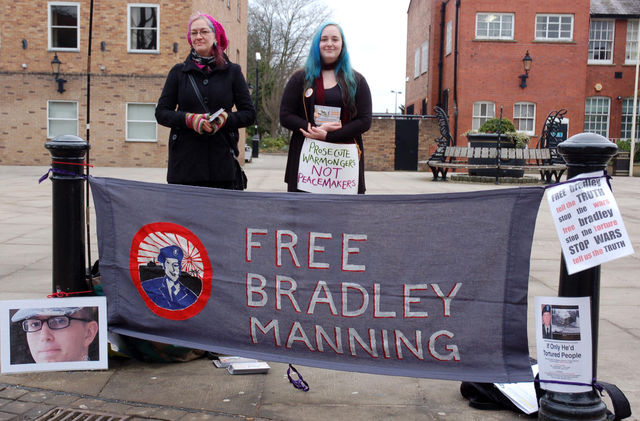 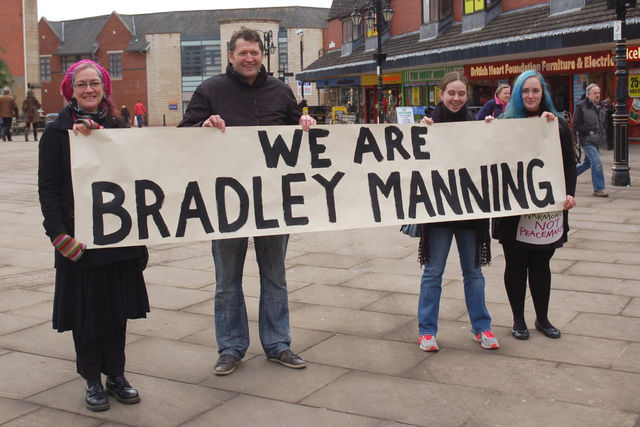 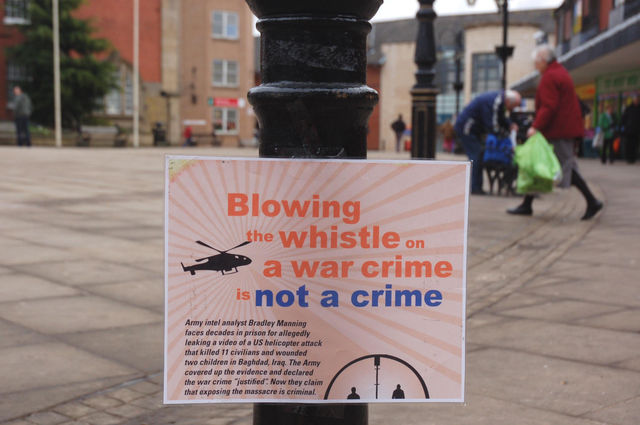 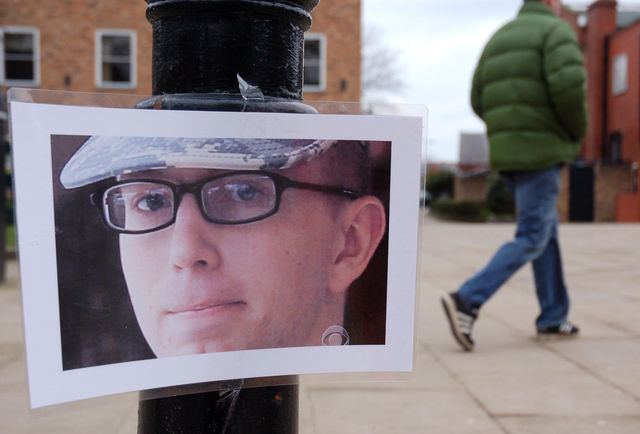 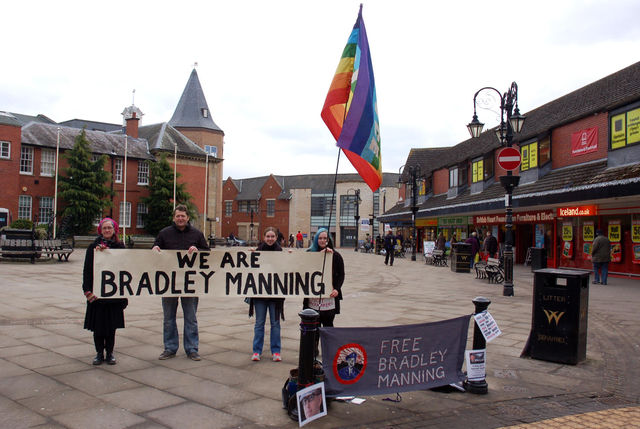 Statement from whistleblowers in support of Bradley Manning

Some of us have first hand experience of attempts to prevent us speaking out about wrongdoing and injustice through the practice of 'gagging', which is by no means confined to the NHS. Local authorities, government departments, government funded agencies, NGOs, banks and large companies all routinely use gagging clauses in compromise agreements in an effort to keep the unvarnished truth about their organisations hidden from the public. Those who refuse to be gagged find themselves targeted: victimised, smeared, persecuted and sometimes prosecuted. It is almost always the whistleblowers rather than the perpetrators of the wrongdoing who lose their livelihoods, often their social networks, family stability and health too. Even where the actions of whistleblowers are completely vindicated, they may find themselves discriminated against when applying for other work.

February 23 marks the 1,000th day that Welsh-American whistleblower Bradley Manning has been held by the US in pre-trial confinement for leaking the truth about the wars in Iraq and Afghanistan (and much more) into the public domain via WikiLeaks, including evidence of war crimes that had been covered up and denied. Ten years ago, as MPs were preparing to vote on the Iraq War, Bradley Manning was a schoolboy in Wales. Now 25, he has spent the last three birthdays in detention, was held under conditions that amounted to torture for 11 months and has been denied his right to a speedy trial, while President Obama has prejudiced the court martial by declaring Bradley Manning guilty before trial. If convicted, he faces the possibility of life in prison without parole.

With whistleblowers in the US as here, the rhetoric is protection, the reality persecution.

We protest this injustice, call on the US government to drop all charges against Bradley Manning and release him from detention.

We demand real protection for whistleblowers in Wales, the US and everywhere.

Mair Jones, whistleblower at the Children's Commissioner's Office for Wales

Yesterday, Saturday 23 February, Bradley Manning supporters around the world protested the continued detention of Welsh-American whistleblower Bradley Manning, who has now been held by the US for 1000 days without trial.

On Saturday morning banners, posters and placards were displayed in Queens Square, Wrexham and hundreds of postcards were handed out by local supporters.

“The public response on this occasion was very positive. It was encouraging that most people were broadly aware of Bradley Manning's actions, the charges against him, his mistreatment and his Welsh connections. Many wanted to find out more and some signed up to the WISE Up solidarity network that has been standing in solidarity with Brad in Wales, Ireland, Scotland and England (

“One placard – Bradley Manning's 1001 nights – High time for a pardon, Obama! – made reference to the narrative of the Arabian Nights, in which the embittered Sultan eventually pardons Scheherezade after 1001 nights, finally acknowledging her wit and wisdom in her skilful recounting of hundreds of stories and her courage in volunteering to be his wife despite the threat of execution. President Obama needs to wake up and acknowledge the courage, wit and wisdom of Bradley Manning who has done a great public service in sharing information, including much from the Arab world, that should never have been kept from the public in the first place. History will not judge Obama kindly if he continues with the persecution of Bradley Manning and of other notable whistleblowers such as the CIA's John Kiriakou, imprisoned this week for speaking up about US torture practices.

“Bradley Manning is accused of leaking the Collateral Murder footage. This is the video and audio taken from a US helicopter gunship during an attack on civilians including two Reuters journalists in Baghdad in 2007 and further attack on a family that came to the aid of the injured in which a father was killed and his two children seriously wounded. The video was not classified as secret but had been suppressed by the US military.

“Manning is also accused of giving WikiLeaks hundreds of thousands of documents that evidence the reality of the wars in Iraq and Afghanistan, expose government lies and reveal the extent and the real nature of US intervention around the world. Contrary to accusations, there is no evidence of anyone being physically harmed as a result of the leaks, while those leaks show us some of the facts about the hundreds of thousands of people who have been maimed, traumatised or killed through military intervention including in Iraq and Afghanistan. Some incidents are clearly war crimes that have gone unpunished while Bradley Manning has been deprived of his liberty for 1000 days and suffered torture for revealing them.

“For instance, the leaks reveal that it was official US policy to ignore the torture of Iraqis in detention, that evidence of child abuse by contractors in Afghanistan was covered up, that the US government WAS keeping records of civilian deaths in Iraq and Afghanistan, that Yemen's president took responsibility for drone bombings that were actually carried out by the US in a secret operation.

“Bradley Manning is facing 22 charges including 'aiding the enemy' which can carry the death penalty, although prosecutors have said they are seeking a sentence of life without parole. A hearing in December examined the treatment of Bradley Manning in Quantico Marine Brig where he was held for nine months under conditions of torture. The UN Special Rapporteur on Torture, Juan Mendez, had already condemned his treatment over a period of 11 months in Kuwait and Quantico. Evidence presented in court clearly showed the extent of his mistreatment, yet the judge Denise Lind decided that if convicted, any sentence should be reduced by just 112 days. The outcome of another pre-trial hearing, in which the defence has called for all charges to be dropped for lack of a speedy trial, is expected this week.”