‘My children do not know where they are, we can’t stay in Nigeria. Why has the British government treated us like this?’ Hassanat speaking from Nigeria. 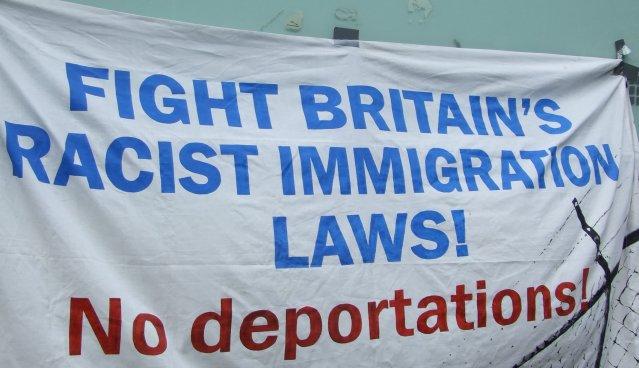 Hassanat Aliyu (Home Office Reference Number: A1432864/5) and her daughters Teniola, Adunola and Shaniola were yet more victims of Britain’s racist immigration laws, uprooted from their community and deported on Saturday 9th March, 10.20pm to Nigeria, Lagos, which will undoubtedly cause stress and psychological damage to the family members. Asylum seekers are criminalised, assumed to be liars and held with racist contempt for daring to seek safety and refuge in Britain, often fleeing from countries which have been exploited and plundered by Britain, Nigeria being no exception. Two million barrels of oil a day are now extracted in the Niger Delta but the majority of Nigerians still live in extreme levels of poverty. British company Shell has a major oil contract in Nigeria and has spent £242m in four years to maintain a 1200-strong private militia to protect its parasitic operations. The British government in turn protects this by denying any human rights violations in Nigeria.

The young family had made a life for themselves in Britain. Hassanat fled Nigeria in 2006, because her eldest daughter Teniola, who was barely one year old at the time, was threatened with Female Genital Cutting (FGC). They were both trafficked to Britain and lived in London for four years, later claiming asylum and moving to Byker were the two eldest sisters attended Byker Primary School. Teniola has spent her formative years in Britain and Adunola, five, and Shaniola, three years old, were both born here.

The government claims to support victims of trafficking and girls at risk of FGC yet they have directly contradicted this with their actions; they have knowingly put Hassanat and her daughters in danger. The UNHCR (United Nations High Commission for Refugees) and other agencies of the United Nations have stated that refugee and asylum status should be granted to women and girls fleeing their country to escape genital cutting. The British government committed to opt into the EU’s directive on human trafficking in July 2011. The directive is focused on 'prevention and combating trafficking in human beings and protecting its victims'. The government have promised to tackle human trafficking and their commitment to better protect the victims, realising that in many instances those who are exploited never fully recover from their traumatic experience.

Despite the fact that her children have grown up here, do not know Nigeria and are under serious threat of FGC in Nigeria, despite the fact the UKBA have not or could not have considered the 'Best Interests of her Children' in deciding their claim for asylum and despite the fact that Home Secretary Theresa May spoke out on International Women’s Day (IWD) stating ‘…as we celebrate women's achievements, we must also think of the problems that women sadly face all too often in the UK and in other countries across the world... Government will do its bit but I want you all to do your bit too. So speak out, stand up against violence against women and girls and that's the way we can eradicate it’, UKBA still saw it fit to send three immigration police to carry out a dawn raid and snatch the family from their home at 7am on Wednesday 6th March, the same morning their fresh asylum claim had been refused, bundle them onto a bus without any warning, forcing them to leave most of their belongings behind, drive them 326 miles to Crawley, near Gatwick Airport and with no crime committed and no charge against them, lock them up in Cedars Immigration Prison, ran by so-called children’s charity Barnado’s – who claim they ‘Believe in Children’, evidently not the black children of asylum seekers, (see Barnardo’s Out campaign for more information

UKBA refer to the prison as pre-departure accommodation, however if you do not have the freedom to leave then it is a prison, plain and simple. Nick Clegg announced in 2010 that child detention would be ended by May 2011, promising that the government would end the ‘shameful practice that last year alone saw more than 1,000 children – 1,000 innocent children – imprisoned. Children literally taken from their homes, without warning, and placed behind bars…That practice, the practice we inherited, ends here.’ Last year 226 children were put into detention centres – the barbaric, racist practice continues.

After almost three days being held in a prison that Hassanat’s family should not have had to endure a single second in, they were bundled into a van early on the morning of Saturday 9th March, Hassanat’s mobile phone taken off her so TCAR, her friends and the press could not find out what was happening to them, and driven 50 miles to Heathrow Airport with nine ‘escorts’ aka plain clothed immigration police, reportedly from private company Reliance, seven of them men and only two women. Two of them told her they were actually former police officers. They arrived at 2pm, were held in a small room for seven hours until 9pm, her children were very distressed and crying, not knowing what was happening, taken in another van to the airport terminal and bundled onto a commercial Virgin Atlantic flight, the day after IWD and when, loyal to the British state, Sir Richard Branson owner of Virgin tweeted his promises to help ‘end violence against women’. Hassanat was sat at the back of the plane in the middle aisle surrounded by immigration police. Two of the nine sat behind her, one on either side of her, two on the same row as her on the right-hand side aisle, and two on the same row as her on the left-hand side aisle. Her own children were not allowed to sit next to her to be comforted, instead separated by this police cordon. Hassanat shouted to try and let the passengers know they were being taken against their will and was told by the officers that if she shouted again they were going to handcuff her and put something over her mouth. She wanted to speak to her kids and get them to scream and shout but she was afraid of what the immigration police would do. After the nearly 8 hour, 3,110 mile flight they arrived in Lagos at 6am, Sunday 10th March, Mother’s Day. The squadron of British officers wiped their hands and dumped the family with immigration officers in Nigeria and a measly £300 – no place to stay, no job, no school, no support, no connection to any communities.

We have put Hassanat in touch with women’s human rights charities in Lagos and will stay in contact with her.

Tyneside Community Action Against Racism would like to thank everyone who has been involved in this public, political campaign to stop their deportation. This is a very sad time for us all. We must remember that with one person being deported from Britain every eight minutes, it is the racist system as whole we need to organise against and link this struggle up with all anti-deportation campaigns to help build a strong movement against racism. We have learned a lot of lessons that we will use to continue this fight, not just for Hassanat, Teniola, Adunola and Shaniola but for and with all the people the British state oppresses and exploits in this country and around the world.