State Violence Against Women: Soni Sori and other cases from India.

Public Meeting to highlight cases of state repression on women, many of whom are human right defenders, many belong to minority sections of society. These incidences point at the increasing patterns in which business and politics intersect to curtain critical voices against state-corporate nexus. 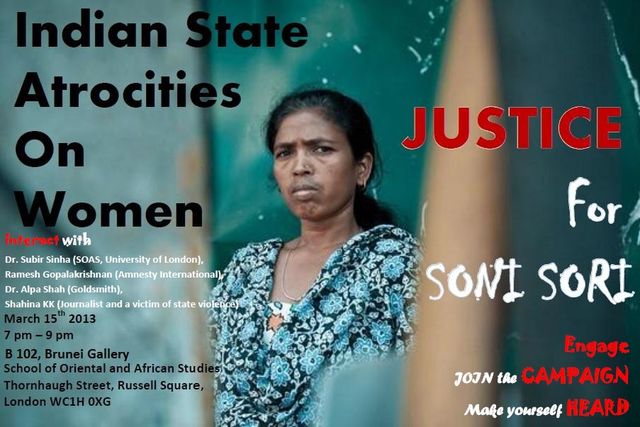 Why: This event is being organised in response to a call for actions by One Billion Rising for Soni Sori. We rise to support Soni Sori, an adivasi teacher, mother of 3 young children, a public spirited citizen of free India who was arrested on the 4th Oct 2011 from New Delhi, kept imprisoned under plethora of political charges, several of which she already stands acquitted of. Hers is the story of an empowered woman in India who dared to speak against the interests of Indian state and mining companies, faced emotional, physical, sexual abuse by state agents and is still languishing in jail. Her perpetrators, on the other hand, are awarded Gallantry Award.

Soni Sori has become symbolic of state and systemic violence. Her experience of a) emotional, mental, physical, sexual abuse while in the state custody; b) the shrewd and brutal procedures that were applied to fabricate her and keep her imprisoned; c) the brutality of a patriarchal state and society over a woman who dared to speak truth to the powers; d) the media and public alienation for victims of state violence, are all representative of a deeper malaise in our global society.

More info on the Campaign:

This action is un-sponsored by state and corporate agents. Join us with free conscious and strengthen the campaign.