One Common Struggle. June 11 Carnival in the West End. 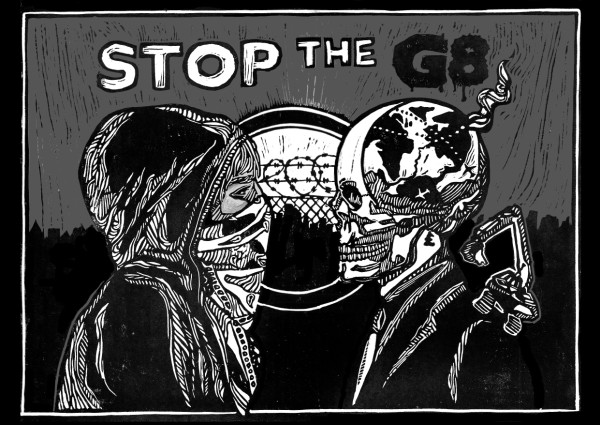 London is right at the heart of global capitalism. And the West End of London, including elite areas like Piccadilly, Mayfair and Knightsbridge, is where power and greed are most concentrated. The West End is home to:

* Corporations. Many of the world's most brutal and polluting companies, including oil and mining giants, arms dealers, and the businesses profiting from cuts and privatisation.
* Vulture funds. Global base of the "hedge fund" and "private equity" industries, laundering the world's blood money to invest in war, food speculation and debt slavery.
* Tyrants. Government offices, embassies, cultural and commercial "fronts" of colonial powers and murderous regimes.
* Playground of the mega-rich. Middle Eastern dictators, Russian mafia oligarchs, and home-grown parasites all see London as a "safe" place to hide and spend their loot.

Traditionally, carnival is the time where the people take over the streets, the bosses run and hide, and the world gets turned upside down. It is a time to celebrate our resistance and our dreams, to bring music and colour to the streets. And also to show our strength and our anger.

The powerful feel safe in London so long as they go unchallenged. But the people looting our planet have names and addresses. On #J11 we will party in the streets, point out the hiding places of power, and take back the
heart of our city for a day. Our streets. Our world.

Like any good carnival, everyone's invited: this will be an open, inclusive, and lively event. There will be a main route with sound systems and public meeting points. Bring music, costumes, banners, friends, ideas.
We also encourage independent actions, and will publish soon a detailed map of the area to help you make your own plans. The Green and Black Cross group will provide experienced medical and legal support.

"There is one common struggle against those who have appropriated the earth, the money, and the machines". Voltairine de Cleyre.