Campaigners have blockaded the gates of a Brighton arms factory on the tenth anniversary of the invasion of Iraq.

A group of activists arrived at the EDO MBM factory at 6am and three of them affixed themselves to the gates using bicycle d-locks and superglue.

The action was held this morning to mark the tenth anniversary of the beginning of the Iraq war in 2003. 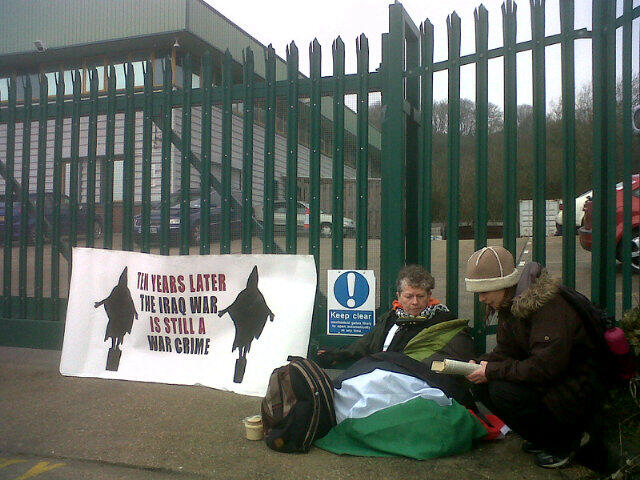 EDO MBM is one of a group of companies which has supplied Paveway missiles for use in Iraq and Afghanistan. The company also manufactures a cable, the Field Replaceable Connector System, which is used on US planes known to carry cluster munitions.

Chloe Marsh of Smash EDO said: “The case for war was put to people in the UK on the basis of an immediate threat from Iraqi WMD. This turned out, as expected, to be a lie. As a result, according to the Lancet, over a million Iraqi citizens have died.”

Andrew Beckett said: “We are here to commemorate those who died in the aerial bombardment of Iraq and to resist EDO MBM's continued supply of components to the US/UK military.”

Another campaigner, Jessica Nero, is challenging her conviction for aggravated trespass in Lewes appeal court today. She will argue that EDO MBM's business is unlawful.