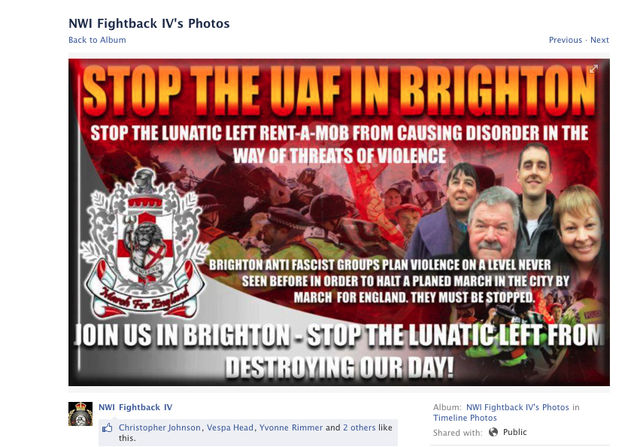 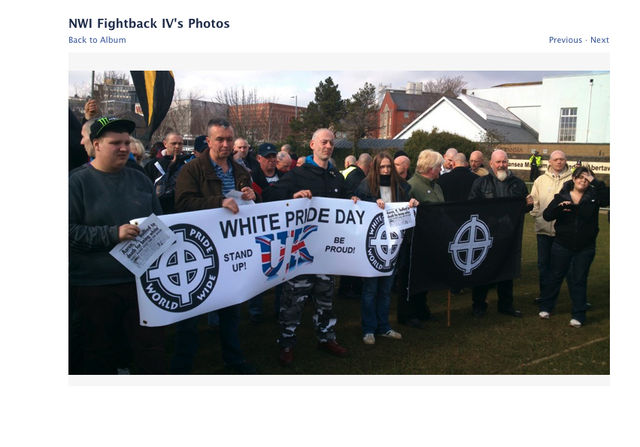 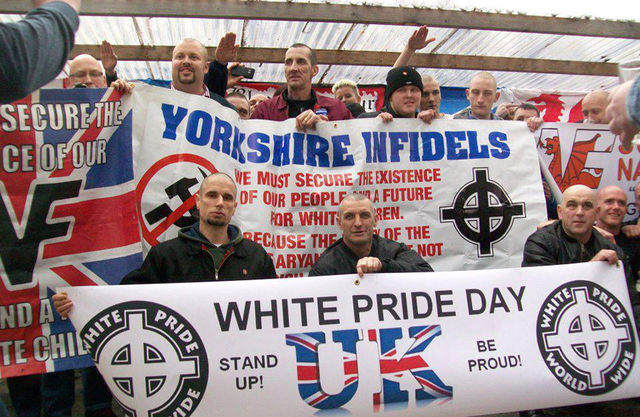 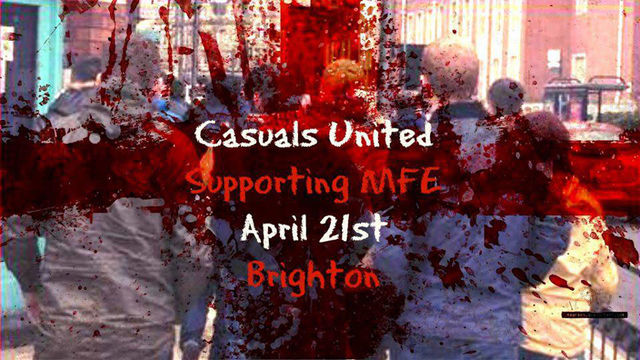 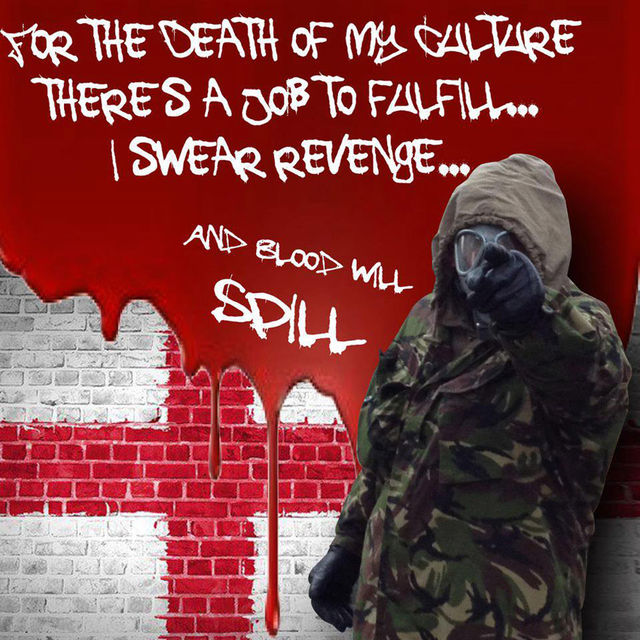 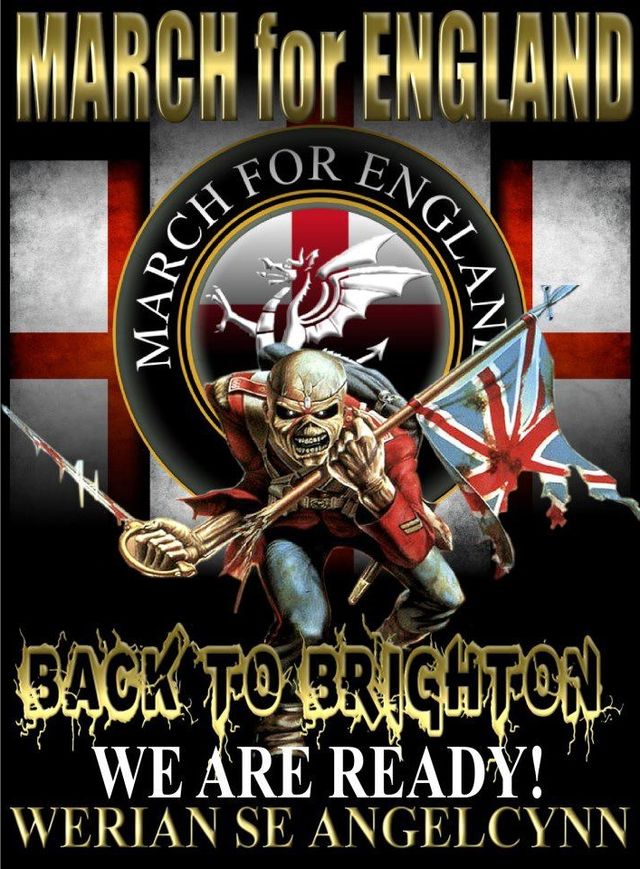 The closet Fascist / fake patriot group March For England (founded by BNP list member and former EDL organiser Bill Baker) plan to visit Brighton for a St George's Day demo on April 21. The 1st image shown here is a graphic posted on Facebook by EDL splinter-group the North West Infidels (on their "NWI Fightback IV" pages) which urges supporters to "Join us in Brighton" in opposition to local Anti-Fascists and in support of the March For England. The 2nd image is from the same Facebook pages, showing how NWI also supported the openly Nazi "White Pride Day" recently organised by the NF in Swansea (note Fascist symbols)...

The 3rd image shows more Swansea "White Pride" supporters making Nazi salutes (and displaying the same banner as in the 2nd photo) - note Swansea NF activist and march organiser Luke Pippen kneeling to the left of the photo with goatee beard. The 4th image shows Luke Pippen posing with a Nazi Swastika (left), then with North West Infidels organiser Shane Calvert (blue jacket) next to an NF flag (also on the Swansea demo). The Swansea NF demo ended with supporters dressing in KKK outfits and lynching black people in effigy at a Nazi concert later that same day (see link and comments) -

It's obvious far-right groups are recruiting Nazis to march into Brighton, but, even worse, far-right groups are calling the Brighton demo a "family fun day" and encouraging supporters to bring children to an event they KNOW will be attended by Nazi hooligans, because far-right organisers want to use their supporters' kids as human shields (to shield them from the anger of people who don't want their town invaded by Nazis). Casuals United groups have also posted graphics supporting the March For England demo on Facebook, showing images spattered with blood and people in gas masks and paramilitary uniforms, while the so-called Sussex Defence League have posted graphics swearing revenge and saying "Blood will Spill". The hollow posturing of these jumped-up cowards notwithstanding, do these look like adverts for a "family fun day"?!

NB - Casuals United is a hooligan network organised by convicted knife criminal Jeff Marsh, who also organised an EDL division called the Welsh Defence League. The WDL collapsed after being exposed after Casuals / WDL organiser (yes, you guess it) Luke Pippen and other WDL members were exposed as supporters of the Nazi group Combat 18 (and if all the different names of these groups seem confusing, in effect and to all practical intents-and-purposes, they're all the same organisation).

198 Brightonians were killed by Nazis during the Blitz - 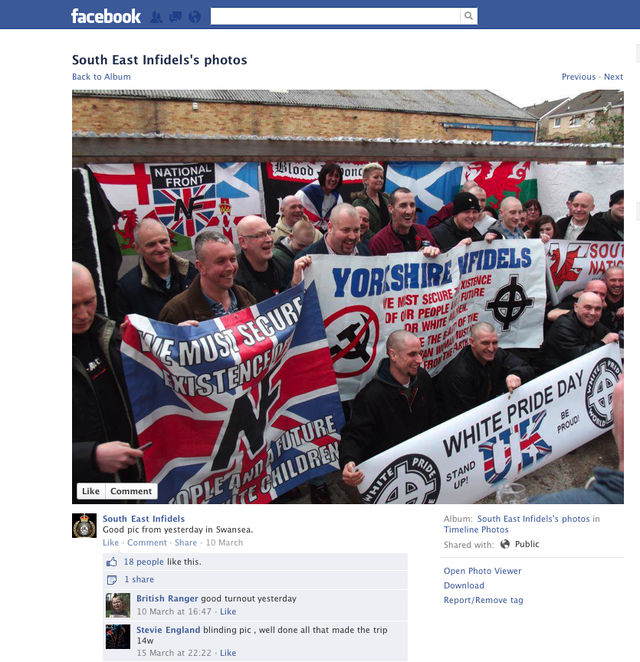 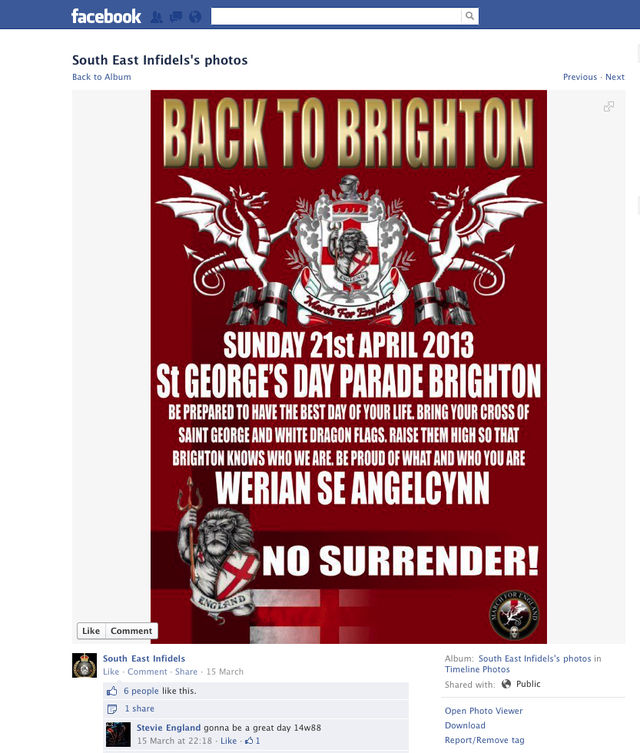 Take a lesson from the Greeks

Throw the scum into the sea

This is Graham Bentley 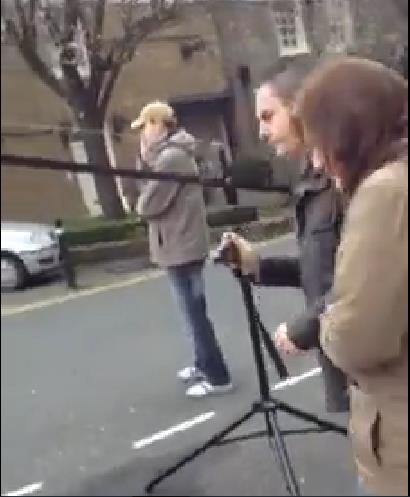 He is Sussex EDL ro at Cambridge demo he didnt go into the pen but stays outside mingling with antis with his wife and taking pics, look out for him as he is going to Brighton

A Better pic of Bentley 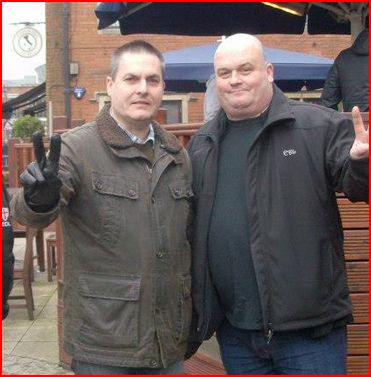 oh and why the paranoia when people are trying to warn you on here? Its not a joke you walk around the wrong corner in Brighton and these fuckers will attack you 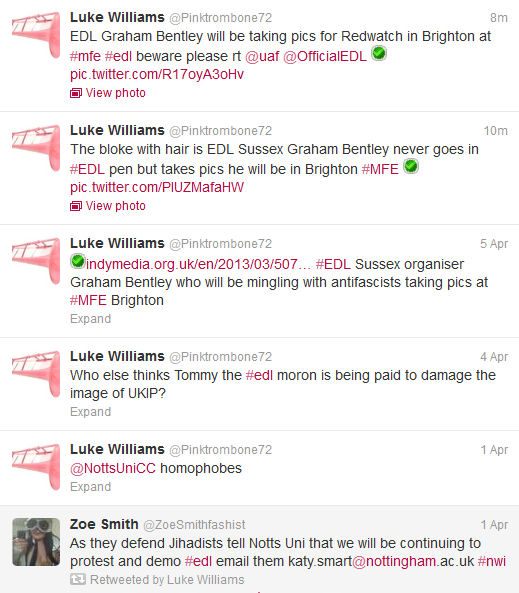 Given the first image 'Brighton Antifa' posted was from a 'Derby Patriot' blog post in 2010, either the Derby Patriot has time travelling powers that could be put to better use or they're just trying to make themselves look hard by trolling Indymedia. A strange tactic, but not a new one for the far right.

The picture probably is Graham Bentley with London EDL RO (and, coincidentally, MfE steward) Dave Bolton. Many on their own side think Graham's a grass and/or dick so 'Zoe the thug' is probably still the same troll trying to kill two birds with one stone.

The first pic was taken at MfE 2010 but if punching one antifascist as he ran from police is their finest moment in three years I don't think we've got much to worry about. 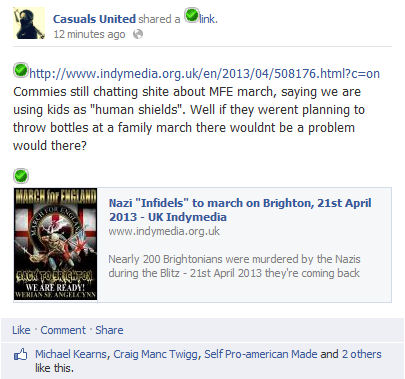 casuals getting frustrated at this page now.. 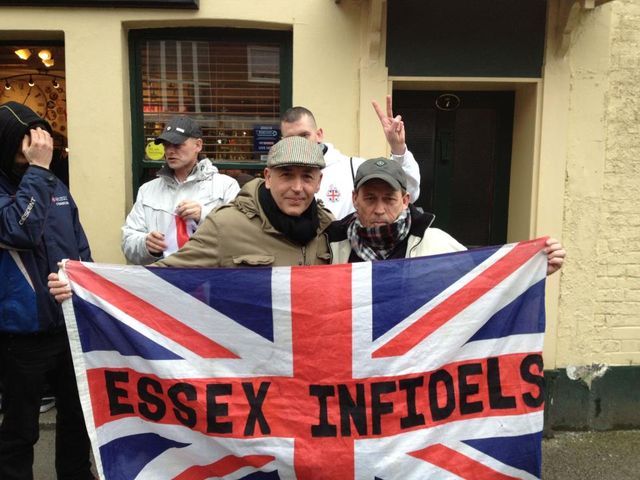 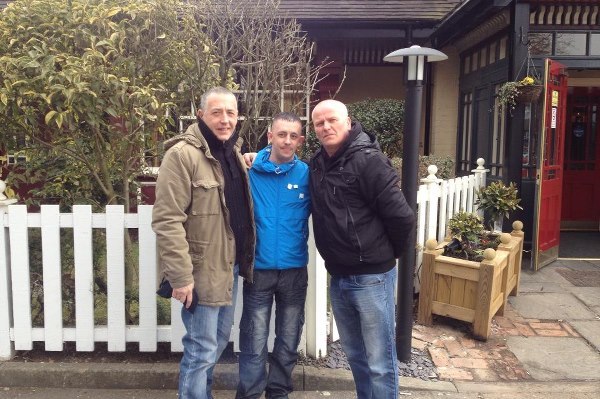 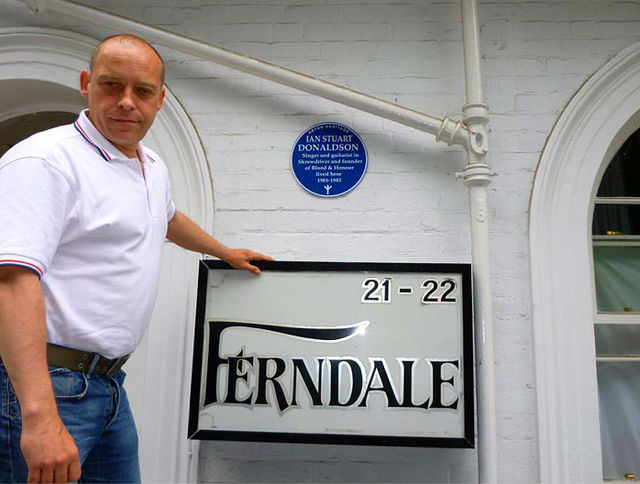 Just in case there was still any doubt about the far right roots of MfE (I don't think there is, but they still like claiming they're apolitical). Here are a couple of pictures from the recent get together of EDL outcasts at the Pure Drop Inn in Poole (even MfE's most local organisers are from west of Portsmouth). The main point of this meeting was for Dave Smeeton (ex-NF and the 'brains' behind MfE) to get support from all and sundry. The fact that there were more groups than people at the meeting says a lot about the state of the endless attempt to 'unite the right'.

Paul 'Pitt' Pittountou (ex-EDL and leader of the South East Alliance) was there with Tony Cutis (ex-EDL I've forgotten what he calls his new one man army) and both of them were hugging fascist Shane Calvert of the even further right North West Infidels (NWI). Paul Pitt who's an MfE organiser also found time to pose with our friend Dave with an Essex Infidels flag. Also represented was Englands Golden Dawn, openly fascist and led by Eddie Stampton - an old school Nazi who was at MfE 2012.

Quite how all this squares with their line of organising a patriotic march of local people is difficult to understand, especially given that they've claimed fascists aren't welcome at the event. Presumably Dave and co are going to turn on the people they had previously been working with when they arrive at Brighton station? Though I doubt it. 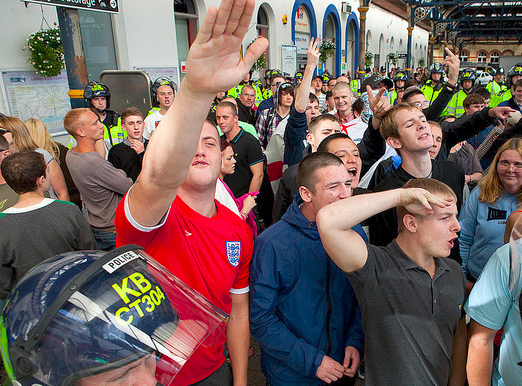 March For England arriving in Brighton

And for anyone out there who has been told by Stampton of his time in jail for the cause??? LMFAO, He was sent to prison for picking up gay men in London,having sex with them then robbing them at knifepoint.Oh i forgot he was arrested for an attack on a woman where she suffered serious injuries and fractures to her face after a severe beating in a flat. P.O.W I dont think so.Cowardly little bully more like.Twisted fucker.

Actually it was NDEU. LOL

We have known for years you're a tout Stampton. Slowly others have also realised and nobody wants to fucking touch you - coke head TOUT

Stampton went to the Swansea white pride demo and made sure he was filmed seig heiling to discredit the organisers as is his usual trick then pics taken from INSIDE the demo area appear all over Commie sites. He is out to disrupt and discredit any Nationalist group he can get his claws into. A total wife beating, grassing wrong un. And selling star of david badges on EDL demos as well? Whats that about? He is hated by just about everyone and his luck will run out any day now. He uses the name C18 to try and frighten people but most C18 would happily serve him up. Hes friendless and reduced to charlied up internet ranting.

Favours for the tout

I see indymedia have taken all the posts down calling that wee bastard stanton a tout,Why would they do that? they also took down his comments about having arse sex with a 14 year old girl ??? again why?? why protect him? Maybe pressure from his handlers? The peelers should be nicking the preverted wee bastard , not protecting him and paying him!.Dont worry Stanton people have seen what you posted ,you sick nonce grassing bastard ya.

Suprise suprise Eddie Stanton the gobshite beer money tout, did a no show in Brighton on the weekend.This after months of winding the reds and press up by sending them messages with his many fake profiles ,threatening and urging them to attack the Peacfull MFE march.At the end of the day his bosses got what they wanted, a load of scruffy anarchists attacking a lawfull march and he got what he wanted,a few sheckles for his treatchery..No doubt he was paid well as he was for the Swansea set up.No suprises though its what he does, incites others to cause trouble and disruption ,stays out the way, then counts the money from . 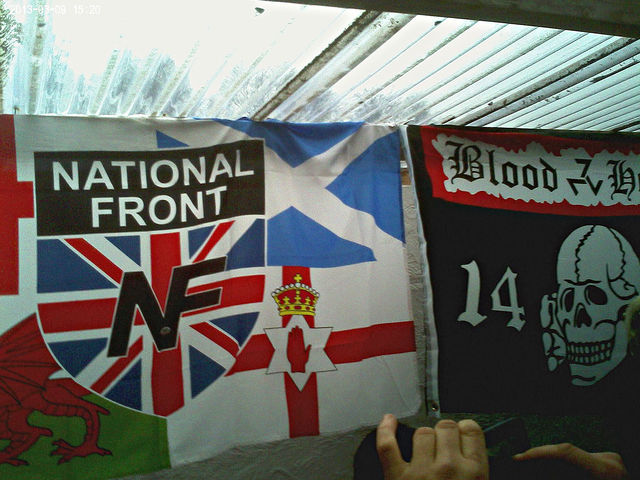 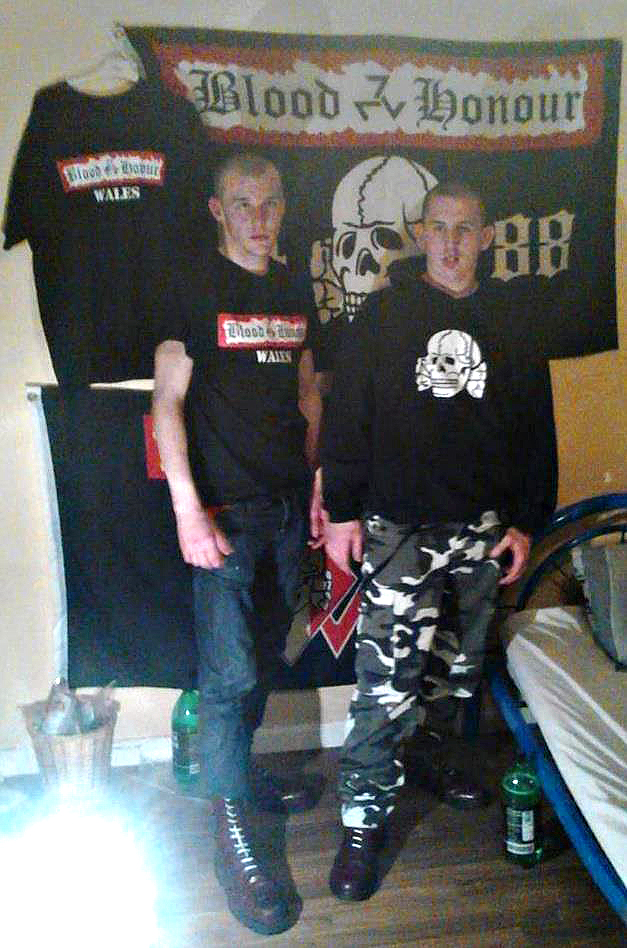 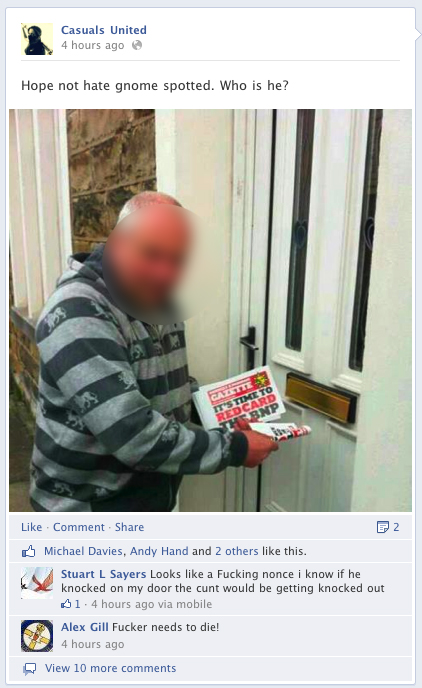