Barnardo's windows smashed in Brixton - it was us

On the celebration of Thatcher's death, we smashed a window of Barnardo's 'charity shop' in Brixton using a concrete slab from a bin on the street. And it was easy. We would of done more if it weren't for self-proclaimed pacifists violently attempting to arrest us. 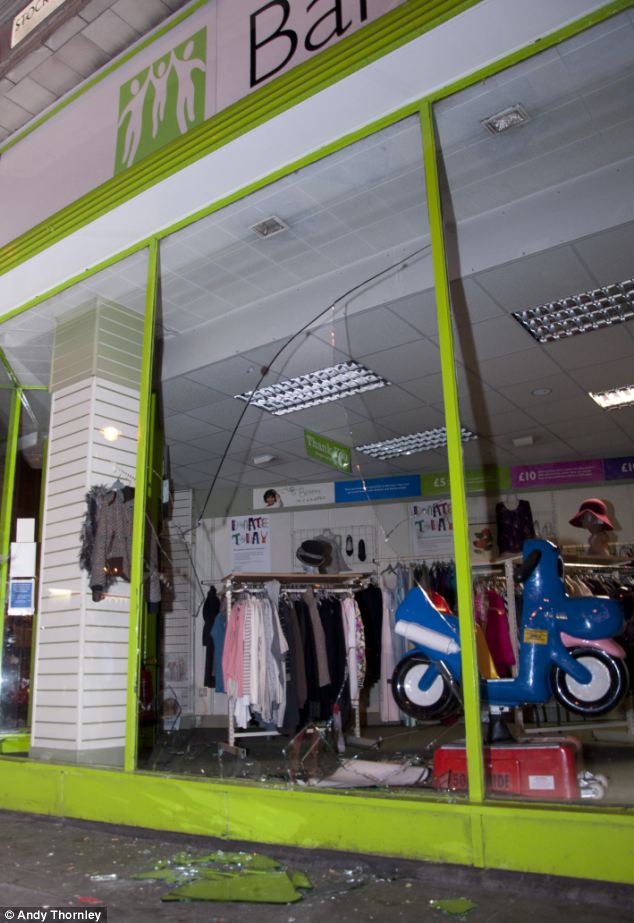 On the celebration of Thatcher's death, we smashed a window of Barnardo's 'charity shop' in Brixton using a concrete slab from a bin on the street. And it was easy. We would of done more if it weren't for self-proclaimed pacifists violently attempting to arrest us.

This action was in solidarity with all migrants detained, deported and struggling to cross borders. Barnardo's was targeted because they fund and administrate Cedars detention centre in Croydon. They detain children, families and individuals who merely seek freedom from poverty, persecution, murder, rape and other oppression the borders.

Freedom to all migrants.
For a world without borders and states.
Fire to the prisons!
Fuck maggie!

"we would have done more"

Anyone who is physically stopped by pacifists must be feeble

I hated Thatcher and am glad she's dead but how typical of the posh boys and girls from middle class universities to use this an excuse to cause trouble. Most of whom probably wern't even alive when she was in power and if they were would never have suffered from her policies.
Then they'll get arrested and go crowing to the Guardian about police brutality!

You claim that Barnados have done bad things and you might even be right, but unfortunately the public will just dismiss your efforts as mindless vandalism (and, hey, please don't bother arguing with me about this - if you can argue successfully against the tide of public opinion then maybe your concrete block won't have totally back-fired). Either way, as a comment on the constant trolling of Indymedia by FAI fantasists and wannabes, the other person's point stands. If you can't even stand your ground against a bunch of pacifist protestors, there's no way way chumps like this self-styled "Federation" (all 2 of them) stand even a ghost of a chance of posing any threat to the State

These FAI twerps have been exposed as agent-provocateurs so many times it almost hurts. It costs the state a fortune to run undercover agents in the radical movement, it costs the state almost nothing to post-up bullshit comments on Indymedia

there has been a fair bit of consensus amongst anarcho/anti-border/anti-capitalist towards Barnados and between other activists and the result is that Barnados has been the target of a number of actions due to its association with supporting deportations.

if it stops supporting deportations the actions against them will cease.
its pretty straight forward really.

‘A group calling itself the Informal Anarchist Federation claimed responsibility for smashing the window of a charity shop in Brixton.......This action was in solidarity with all migrants detained, deported and struggling to cross borders. Barnardo’s was targeted because they fund and administrate Cedars detention centre in Croydon. They detain children, families and individuals who merely seek freedom from poverty, persecution, murder, rape and other oppression the borders.’

The Daily Mail reprinted the statement from the Barnardo window smasher on it's website so the linking of the action and Barnardo's, Cedars detention centre got loads of publicity.

This has certainly brought a lot more attention to Barnardos disgusting involvement in locking up migrant children, who are then deported sometimes to torture and death, in their little known Cedars family prison. Thanks also to the Daily Mail for that!

I think it's so important to respect and use a diversity of tactics. Actions like this certainly do help highlight issues. At the same time, it would be great to see this followed up with a concerted neighbourhood campaign against the Barnardos shop in Brixton, maybe with people leafleting there regularly, to make everyone in the area aware of the issues. The point is that there is room for all kinds of involvement and different styles of campaigning can support each other. If you don't like the sound of smashing glass, no one is forcing you to break windows, but respect other people's freedom to act and make their own decisions.

no one else does, is that clever?. What would the Thatcherites do without actions like this& the millions encouraged not vote allowing them to get in again?, if some "anarchists" didn't exist would Thatcherites do so well without you?. Tory central office will be rubbing their hands in anticipation for protests@ her funeral, arguments about the bedroom tax,etc,etc will be eclipsed, thank you.Are you A, nihilists, who don't give a shit B not thinking& acting like idiots c, agent provocateurs.

Yes Thatcher was a nasty person, it makes me angry, is this justice?,will it help make better life for the poor, who do actions like this help?

@Jim seriously do you think any ruling class measure was ever defeated by "arguments"? Do you think thatcher dropped the poll tax failed because we had better "arguments"? Its only when people are angry and take action and put a bit of fear into our lords and masters that they back down an inch. And someone has get off their keyboards and start it. For all this talk of agents provocateurs the much bigger problem we face at this point is those who rush to condemn anyone taking any kind of action and try to spread fear and passivity so that we stay safe indoors.

It was NOT you

I have always looked at those windows with a desire to smash 'em... since Barnardos got involved in detaining children. A leaflet explaining to the masses the meaning of the smashing should follow.

This charity does NOT detain children. Get your fucking facts straight you cretins

On the 11th of May Roberto Adinolfi, CEO of an Italian state controlled nuclear engineering company, was shot and wounded. A cell of the insurrectionist Informal Anarchist Federation have claimed responsibility for the attack in a statement, saying that it was an act of vengeance for deaths and environmental damage caused by the nuclear industry. Previous acts claimed by Informal Anarchist Federation cells include sending a letter bomb to the Italian tax collection office, almost blinding a worker at the office and risking the lives of the postal and clerical workers who unwittingly carried the bomb.

In our aims and principles, the Anarchist Federation states that “It is not possible to abolish Capitalism without a revolution, which will arise out of class conflict. The ruling class must be completely overthrown to achieve anarchist communism. Because the ruling class will not relinquish power without their use of armed force, this revolution will be a time of violence as well as liberation”. We are not a pacifist organisation and do not condemn insurrection itself or all insurrectionist tactics; however, as Anarchist Communists we strongly criticise individualist and vanguardist tactics that do not come out of a broad-based class struggle movement. We condemn actions that put workers in danger without their knowledge and consent, and we reject elitist statements, such as that made by the Informals, which consider the working class to be too ignorant and invested in Capitalism to be relevant to struggle.

Don't be lazy...simple google searches can help you reduce your ignorance. Or why not start by clicking on the Barnardo's Out link to learn more about the disgusting way in which Barnardo's has capitalised on the issue of child detention?

Yes, they detain children; foreign children - or don't they count in your view?

So, let's get this straight. A while back the Daily Mail identified "anarchists" among Dale Farm protestors on account of a handful of activists wearing masks, despite admitting that a fair portion of those masked "anarchists" were in fact infiltrating Daily Mail reporters! Now a photo of a broken window appears in an article on the Daily Mail website [1], then a thread [above] appears on Indymedia re-posting that same Daily Mail photo and claiming responsibility for this vandalism on behalf of "Anarchists", then another Daily Mail article [2] quotes that same Indymedia thread as "proof" of the bad behaviour of... you guessed it... Anarchists

It's been obvious the Daily Mail routinely troll fake posts on Indymedia for several years, but since Daily Mail photographers just happened to be in exactly the right spot there to photograph this broken window immediately it happened, it wouldn't surprise me if these photographers were the same people who actually broke the flipping window (ditto for reports about the big TUC demo where press photographers were offering kids £20 notes to break windows etc) 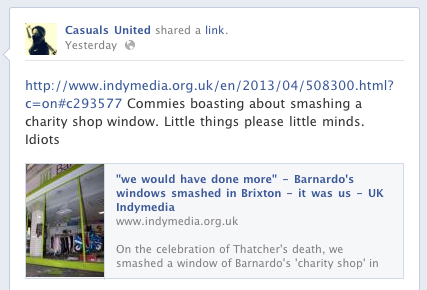 Indymedia + Informals provide a minor PR coup for Fascists, as well as for the Daily Mail

This wet-dream is, of course, completely disingenuous. As usual.

Barnardo’s provides welfare and social work services at Cedars detention centre in Croydon. If they didn't, no one would - certainly not any 'anarchist group' who WANT immigrants to be treated badly to justify their lies. Barnados believe every family and child should be treated with dignity and respect and be able to access support. 'Anarchist groups' SAY they want something similar but do everything to ensure the opposite happens. They create these conditions for immigrants and their families so they can use them for their own ends and are furious if anyone tries to help the families in any way - their way or no way. Sound familiar?

But here, make up your own mind, if you have the capacity (I chose this link as it's the most straightforward and has links to the relevant pages, do your own research if you want more):