Join the HUN in brighton 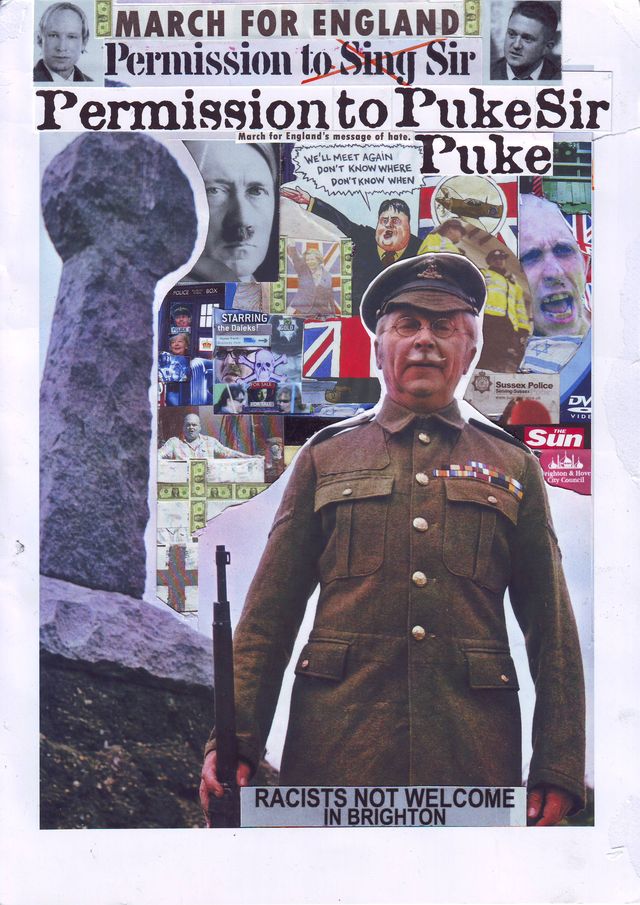 this sunday in brighton will c the annual march for nazismzionism hosted at great exspense by you the taxpayer.the march has been sanctioned by sussex police and masons to prove the point once and for all that they and their council lackeys not the good majority of brighton people decide who is welcome to desicrate everything that is good about brighton.theENGLISH HUN LOVERS SOCIETY plan to muster at falmer railway station and brighton station befor being given a golden platinum bus pass to brighton beach where they will make english sandcastles and have a spin on the wheel whilst being pelted with pebbles.english pebbles no less cos they is the bestest.when the noncefest is over sussex police give u their unearnest assurance that they wiil as usual let some hun slip away into the darkness after the dark march is over so they can bag sum darkies.SMASH THE NAZIS

they r hun sir dressed in the enemys uniform sir ..that is an offence sir,,underneath their union jacks is the german unform..permission to line them up sir...against the wall

We all know the March for "England" (sic) is a Nazi walkabout, but to suggest it's sanctioned by the masons is just plain ridiculous

Hmm, yeah, and Indymedia is run from the dark side of the moon by aliens

Wanka get a life

youre not working class enough.

only working class are welcome on this site

fascism doesnt make a distinction over the class of its enemies but the working class are the one class that NEVER benefit from fascism. be at the beach!

The whole story sounds farsical, but why the fact that it is 'supposedly' sanctioned by The Police and (free) Masons, ridiculous ? Lot's of cops, magistrates ans Judges are freemasons and they do tend to work behind the scenes to, how shall we say, make (their) common interests run smoothely. Presnts them with a good opportunity for a photo shoot on the beach. "Strategy of tension" and all that hoo haa. Should be kicking off in Rome this weekend. Freemasons are not the stuff of Conspiracy Theories, they are 4 Real.