50 people took part yesterday in a demonstration and rally outside the annual general meeting of Drax Plc, at the Grocers’ Hall in London, organised by Biofuelwatch and supported by 16 other groups. The protest opposed Drax power station’s plans to convert half of its generating capacity to biomass, and highlighted the impacts that this will have in terms of increased deforestation, land-grabbing and carbon emissions. 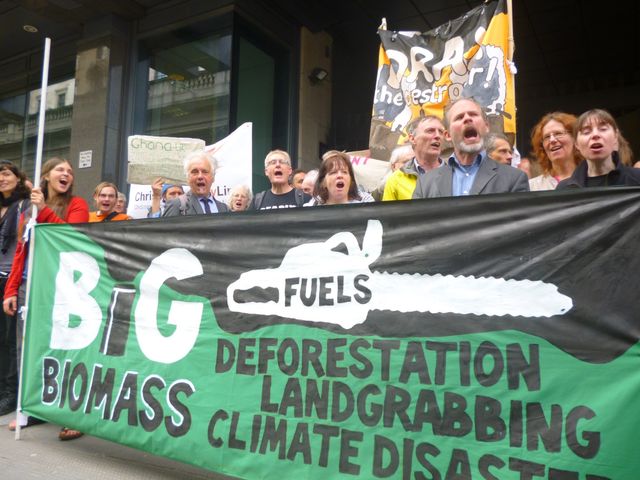 
50 people took part yesterday in a demonstration and rally outside the annual general meeting of Drax Plc, at the Grocers’ Hall in London, organised by Biofuelwatch and supported by 16 other groups [1]. Demonstrators chanted “Drax Drax, what do you say? How many trees have you killed today?” and holding banners reading “Big Biomass: Fuelling Deforestation, Land-grabbing and Climate Disaster”, “Big Biomass is Greenwash not Renewable Energy” and “Drax the Destroyer!”. Biofuelwatch called the demonstration to oppose Drax power station’s plans to convert half of its generating capacity to biomass, and to highlight the impacts that this will have in terms of increased deforestation, land-grabbing and carbon emissions.

The protest coincided with the publication of an open letter to Drax Plc signed by 49 different organisations and networks worldwide, including Friends of the Earth International, the Global Forest Coalition and World Rainforest Movement [2]. The letter concludes: “We oppose commercial and industrial scale bioenergy, and demand that the UK halt coal conversion plans and force these coal plants to shut down. Meanwhile focus must be redirected towards a serious reduction of energy consumption and dramatic measures to protect and restore forests and other ecosystems.”

Drax’s biomass plans will require pellets made from 15.8 million tonnes of wood each year, making it the biggest biomass-burning power station in the world. By comparison, the UK’s total annual wood production is only 10 million tonnes. Overall, energy companies in the UK are planning to burn up to 10 times as much wood as the UK produces ever year. Wood burned by Drax increasingly comes from whole trees felled for this purpose [3].

In addition to issues of deforestation and land-grabbing, recent scientific studies have shown that biomass used for electricity generation is actually more carbon intensive than burning coal [4]. Duncan Law from Biofuelwatch said: “Burning biomass on the scale proposed will be even more carbon intensive than the coal it will replace, and result in a massive carbon debt stored just where we don’t want it, in the atmosphere. Far from being a low-carbon fuel, it’s a total climate disaster!”.

For local communities, coal to biomass conversions will mean decades more of high levels of pollution, since the conversions allow power stations to continue operating when they may otherwise have to close down [5].

[2] The Open Letter to Drax can be found at

[3] The Dogwood Alliance, a nonprofit organization working to protect forests in the Southern US, released a report entitled “The Use of Whole Trees in Wood Pellet Manufacturing,” in November 2012 documenting the fact that the top exporters of wood pellets in the region rely heavily on cutting down whole trees to satisfy demand from European power stations. Scot Quaranda, Campaign Director for Dogwood Alliance said “Energy companies in the UK, including Drax, RWE and E.On are converting large, old, dirty and inefficient coal power stations to biomass all in the name of reducing carbon emissions, but the reality is that this shift will accelerate climate change while also driving destructive industrial logging in the world’s most biologically diverse temperate forests.” Through direct investigation and research, the report documents the use of whole trees from Southern forests by the largest wood pellet manufacturers and exporters in the Southern US. Pellet manufacturers such as Georgia Biomass, a wholly owned subsidiary of RWE, and Enviva, a major supplier of Drax and E.On are highlighted in the report as using or if not open, planning to use, whole trees. The report can be found here

[4] For a list of studies into the carbon impacts of biomass electricity, see www.biofuelwatch.org.uk/resources-on-biomass. In addition, the report “Dirtier than coal?” published by RSPB, Friends of the Earth and Greenpeace can be found here www.rspb.org.uk/Images/biomass_report_tcm9-326672.pdf

[5] According to a briefing by Department for Energy and Climate for the House of Lords on 14th February 2013, “the conversion of existing coal generating plant to biomass or higher levels of biomass co-firing is a way of keeping open some existing coal plant that would otherwise close before 2016 under environmental legislation, and therefore improve capacity margins over this decade.” (