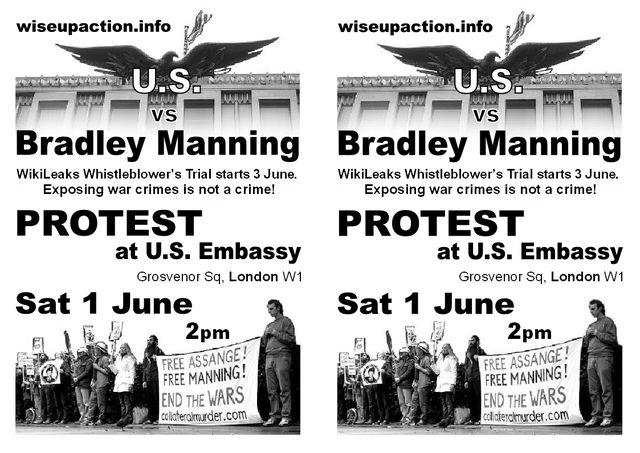 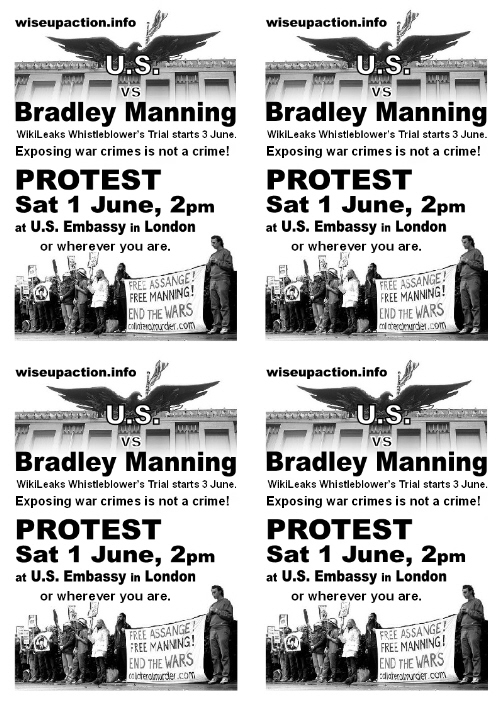 14 Bradley Manning solidarity activists gathered on the London May Day march to spread the word about the forthcoming June 3rd. trial

http://www.bradleymanning.org/ . Folks were largely drawn from Assange embassy solidarity vigil, Catholic Worker, Veterans for Peace. We mingled among the crowd as it assembled, passively leafleting & speaking to people about the case, set up on the sidewalk as the march passed offering leaflets, marched and set up a shrine/ static display/ engaging folks expressing interest in the display at Trafalgar Square. It was great weather.

Some observations
- the left groups that played a major role in the million+ anti-Iraq War mobilisation (and some say milked that movement) are disengaged from Bradley's plight as consequence of his nonviolently exposing that war.

- there is a general problem of movements taking responsibility for prisoners they produce. That unfortunately is the paradigm we are operating in as we approach this trial eg. opportunist organisations mobilise people to march against the war, they incite resistance, they abandon the resister. This is not only a problem for Bradley, but a general problem for those in and outside the military who moved from protest to nonviolent resistance to oppose the war.

- The name "Bradley Manning" does not have good "brand recognition" even amongst this May Day crowd. When explaining to people expressing interest in the display there was recognition (largely ignited memory) of the word "WikiLeaks" they then understood who Bradley is when explained.

*Conclusion use the full name Bradley Manning WikiLeaks whistleblower (or some better term as lots of folks don't know what a whistleblower is prisoner? dunno. "Brad" might mean something to us but it means little to anyone else.