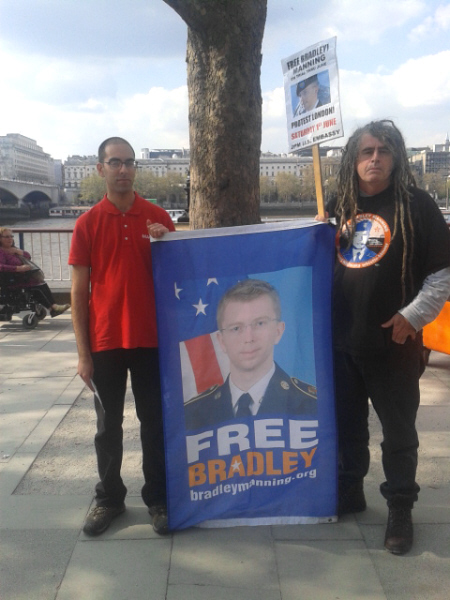 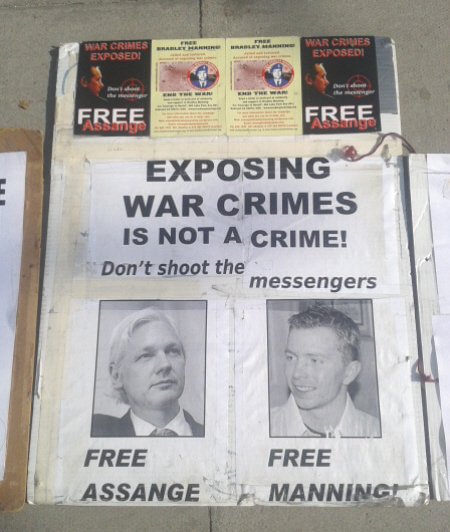 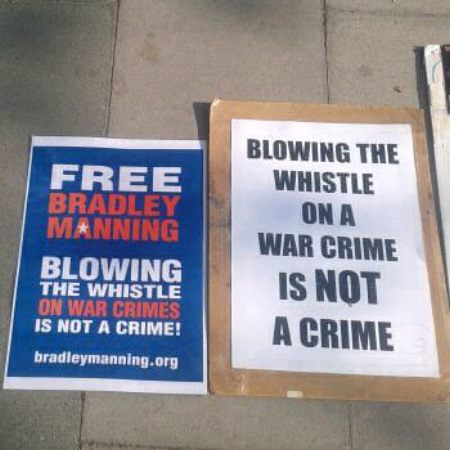 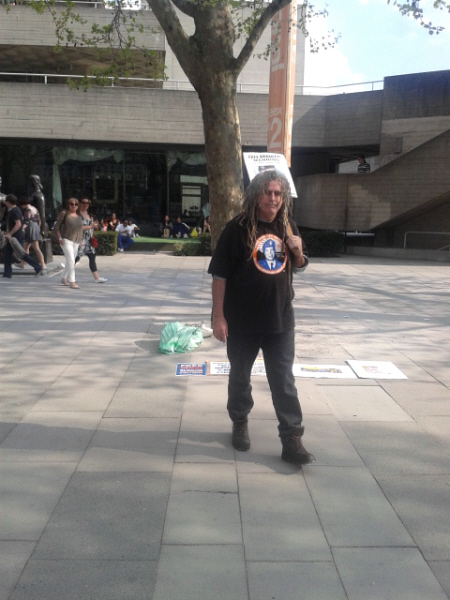 Through the month of May, members of the London Catholic Worker

http://londoncatholicworker.org/ and friends will be out on the streets of London Mon Wed Fri 4-6pm raising awareness of the forthcoming June prosecution of Bradley Manning

http://www.bradleymanning.org/ Bradley has been imprisoned by the U.S. military for close to 3 years for exposing the wars on Iraq and Afghanistan, he has been tortured & defamed in the hope of breaking him. He has refused to be broken. He faces a lifetime of imprisonment if convicted of the 22 charges.

Over a million+ marched in the streets of London against the war in Iraq. We believe when you march against a war you implicitly incite people within the military and civil society to nonviolently resist the war. We figure, if you have incited such courageous resistance one has an obligation to accompany the resister through the consequences.

We know from our own experiences of imprisonment for nonviolent anti-war resistance, the more solidarity the resister experiences the more possible it is sustain oneself in resistance and in prison.

Bradley Manning has been largely abandoned by the anti-war NGO's and "leadership" that postured at the kick off of this war. We also realise that although the broader anti-war movement has ended, the war on the people on the Iraq and the Middle East has not ended. The war escalates and expands across the Middle East. We also know that the nonviolent resistance continues with Bradley and others in prison and before the courts.

All we are asked to do by the war making state in these times is to avert our gaze. We are not asked to accept rationing, endure conscription or even express our enthusiastic support for the wars. Bradley Manning could have averted his gaze from this U.S. helicopter gunship massacre in Baghdad

We are inspired and challenged by the words of Bradley leaked from a recent pre-trial hearing at Ft. Meade, Maryland

http://tinyurl.com/cpn7we6 .Bradley Manning is in there for us, we're on the loose for him.

http://nationaltheatrewales.org/bradleymanning/
If we can get our act together we will do Hyde Park Speakers Corner thru May

.....or spread the word on the persecution of Bradley Manning, take solidarity action on streets closer to home.

It doesn't take much to break the silence surrounding these wars and the resistance to them. This humble effort on the south bank of the Thames we placed a few visuals on the path, backed off and gave people time to view them before engaging the curious in conversation, offering flyers if they expressed interest