"The most important thing is my jewelry, which is a picture of Bradley Manning. I’m here to promote Bradley. He needs public support for what’s going on with secret trials and trying to lock him away. He’s the bravest of the brave." 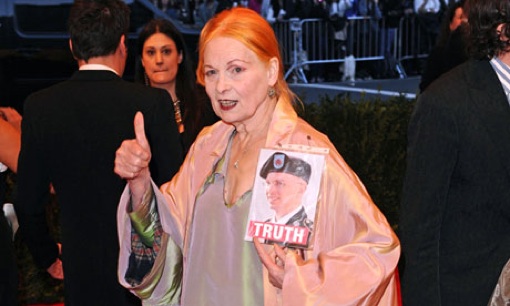 May 6th saw the the most glamourous night of the year for high fashion – the Metropolitan Museum of Art Gala in New York. Since its inauguration in 1948 the swanky annual fete has feature a different theme. This year it was ‘Punk: Chaos to Couture’, and the oohs and ahs of the starstruck crowds and the roll and flash of cameras greeted celebs and society elite as they stepped out of their limos onto the long plush red carpet, dressed in their designer finery.

Most of them weren’t attired in punk regalia. Stars such as Beyonce, Sarah Jessica Parker, Kim Kardeshian and Gwynneth Paltrow favoured long flowing dresses, lowcut or high, but Madonna in a black page-boy wig didn’t disappoint. Dolled up in a short tartan tunic with a studded leather belt, black suspendered stockings, a crucifix dangled by a chain at her crotch. The appearance of 72 year old Dame Vivienne Westwood, described as the cornerstone, style-wise, of the whole punk movement in London, was eagerly awaited. What amusingly outrageous outfit could she turn up in that might inspire a little of the shock that first greeted her bondage-based creations in the late Seventies? The crowd waited in eager anticipation, sure that now in the second decade of the 21st Century, they were no longer shockable.

But as she stepped from her car onto the carpet, the appearance of orange-haired Ms Westwood drew gasps, pursed lips and frowns, quickly averted gazes and agitated whispers. It wasn’t the long sedate pastel pink and mauve silk gown she was wearing that created the shocked reaction, but the large picture pinned to the breast of her overrobe. It showed a portrait of jailed American military whistle-blower Bradley Manning. In bold capitals the word TRUTH bannered the bottom of the ‘brooch’.

As she proceeded through the evening, responses to the blatantly political badge was mostly embarrassed, but one of the most influential figures in the birth of punk could hardly be ignored. In response to Vogue.com livestream reporter Billy Norwich, who was interviewing the stars about their clothing, Vivienne Westwood said:

“The most important thing is my jewelry, which is a picture of Bradley Manning. I’m here to promote Bradley. He needs public support for what’s going on with secret trials and trying to lock him away. He’s the bravest of the brave, and that’s what I really want to say more than anything. Because punk, when I did punk all those years ago, my motive was the same: Justice, and to try to have a better world. It really was about that. I’ve got different methods nowadays.”

Norwich, looking uncomfortable, tried to wrap up the interview.

“Is that it?” Westwood asked. “Don’t we have more time? I want to say one more thing..” But her mike was pulled and the camera panned over to co-host Hilary Rhoda’s introduction to a video piece on Andrew Bolton, the exhibit’s curator.

Shame on Vogue. And besides, the whole evening was a grotesque wealthy travesty of the punk movement.

Although almost snubbed at the Met Gala, in an interview last month with Style.com Vivienne Westwood was allowed to express her views more freely:

“It’s exactly the same motive that causes me to have this interest (Bradley Manning) as what motivated me for punk. It’s the same thing. Justice. Everybody should have a fair deal; everybody should have the chance to life in this world. If we were evolved as human beings, we would hopefully be able to alleviate suffering in the world. So my motives come from the same cause. I’m not sure if other punks at the time were doing it for the same reasons. A lot of them were doing it to have a great time and look good.”

“The hippies had politicized my generation, and I was so upset with the death, destruction, and corruption in this world. That’s what I wanted to destroy, that’s what it meant to me. At the time, the punk movement was just iconoclastic, but for me it meant more.”

“You’ve got to have ideas. For me, punk lost its interest because it ran out of ideas. It’s about trying to change the world, not just jumping around and spitting. You’ve got to have ideas, which don’t just fall into your lap. You have to get those ideas by studying and understanding the past—by reading, by looking at art from the past. “

“I’ve just been to a see a play about the arrest of Ai Weiwei, and of course I believe that free speech should be not only tolerated but encouraged. People should be free to say what they think. But at the end of the play, he addressed the audience, Brechtian style, and said that people weren’t thinking – meaning the audience – and the whole play had been about people not thinking, but they had swallowed lock, stock, and barrel the iconoclasm and received opinion of the twentieth century. What I felt like saying is, freedom of speech really has no value unless people have something to say. We are dangerously short of culture.”