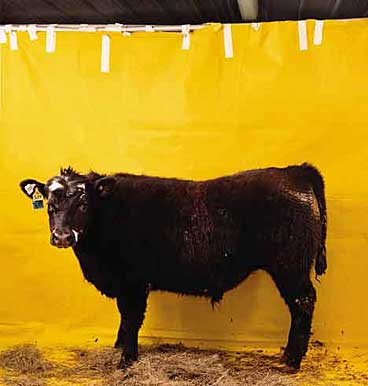 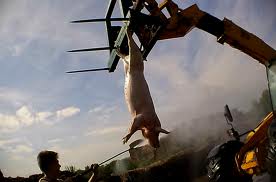 Only dead pigs can fly?


Michael Pollan in the New York Times wrote of his year of following 'his' calf to the final butchering before he took the innocent mammal's slain cadaver home to eat him.

He postulated that if he could kill a mammal, he was being more truthful than those who eat beings they have not known. It reminds one of Leo Tolstoy's query as to who was worse... the wolf who cried when he ate the lamb or the wolf who did not. Included here is a picture of "Steer 534" (never given a name) shortly before he was murdered. When a bull is brutally castrated, he becomes defined by his lack as a 'steer'. Steer 534 is the animal Pollan raised for the sole purpose of killing and eating him.

After that Pollan has promoted the concept of 'omnivores' which does not mean 'to eat each creature on earth' nor to eat omnis, but is a new term for those who eat animals, fishes, dairy and nonkilled or stolen foods. It is less threatening and descriptive than 'carnivore'.

Perhaps it is because of the declining sales of all factory farm products, from those pigs raised in captivity and agony at Smithfield, the world's largest factory farm, to those raised in smaller operations before the final betrayal of farmer friendship, that Pollen's latest book promotes heart attack engendering, trichinella worm containing, colon bacteria laden pig carcasses.

Pollan’s several works promoting animal eating have also destroyed animal habitat and caused global warming as they have been published in metropolitan newspapers killing millions of trees annually as well as in treekilling books.

Now Democracy Now, ostensibly a progressive tv and radio network, has given him a full hour to promote animal agony. In it he praises pig flesh cooked at 200 degrees, far below the over 300 degrees necessary to kill trichinella worms, the worms encased in hard cysts who cause trichinosis.

http://bst1000.blogspot.com/ Blood Sweat And Tears: A Fraction of the Toxic Ingredients in Animal Flesh