Children's Art from Gaza: Report on talk by Rod Cox in Wrexham

In the final week of the 'Loss of Innocence' Exhibition of Children's Art from Gaza at Wrexham Cathedral, Rod Cox came to speak about how he collected this artwork in early 2009 as part of the Aid Convoy in the wake of the 'Operation Cast Lead' bombardment of Gaza by Israel, about the children who created the artwork, their trauma, injuries, lost families, destroyed homes and shattered lives, as well as their hopes for a peaceful future free from fear.

The Exhibition has now moved on to the local Yale College of Further Education where it will be open for viewing by students and the public in the Learning Resource Centre (library) for the next two weeks. From 4 June it will move again to St. Christopher's School in Hightown. 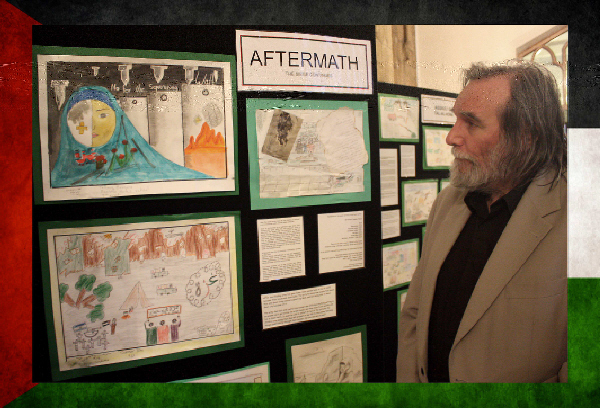 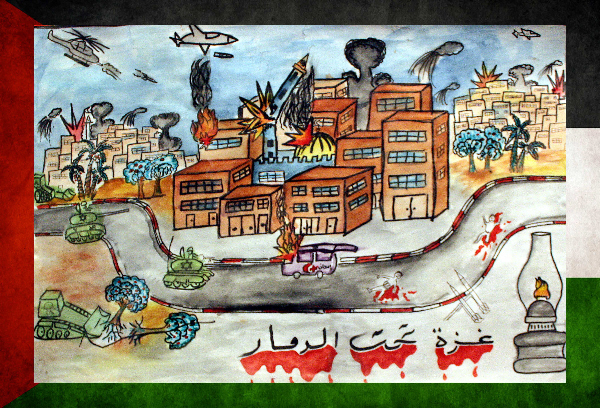 In a side chapel of the Cathedral adjacent to the exhibition, Rod displayed slides of the pictures and photos of the young artists and gave a little background information about each child, their circumstances and the meanings of their pictures, from accurate and literal depictions of the devastation wreaked by aerial bombardment and with tanks and bulldozers on the ground, to rows of dead babies accompanied by the legend 'Did they have weapons?' to symbolic images such as an Israeli soldier standing on the oppressed people of Gaza, cacti to indicate the patience and steadfastness of the Gazan people in the face of adversity, and the dove of peace rowing a boat determinedly over the sands of indifference.

Visibly moved at times, he spoke of the adults seeking to help the traumatised children come to terms with their experiences while also struggling to come to terms with their own grief and trauma. The very practical help offered to the children included a young journalists group where children, some of whom had lost all their family members in the assault, learned about the media and journalism. They were also taught about the International Criminal Court and practised arguing and presenting their cases through role play.

Rod observed that the children who appeared to be most traumatised in Gaza were those who had not themselves been physically injured in the attacks but who were living in constant fear of this happening. Children who had been injured and had survived appeared to suffer less psychological trauma in general – having been hurt, they could focus on recovery and were less fearful. He then described one young person, devoutly religious, happy, well adjusted, without fear and full of the spirit of resistance. Rather than seeing himself as a victim of Israel's oppression, he saw himself as part of an armed struggle in which lives including his own may be sacrificed, but through this struggle and suffering could come hope for the future of his people. Asked by Rod about the death of his three brothers, killed inside the family home, he conceded that he had been sad 'for a day' but after that was proud and felt that his brothers had sacrificed their lives for the cause of the Palestinian people. This account gave me some insight into the desperate circumstances that fuel armed resistance movements here and elsewhere.

A selection of comments from the audience

"as well as myself, i feel like my son got some real education tonight too....like a history lesson but its also happening now.....a lesson with real tangible direct evidence from primary sources.....brought to life by the pictures, the children's words, the photos and rod's talk.... we can't do much about WWII that we learn about in school now, but we can do something about what is happening now (however little)... good on the school(s?) that will be hosting this exhibition."


"absolutely amazing talk. Absolutely amazing. Rod spoke from experience and from the heart and I took so much away from this .I'm surprised there were not more people that espouse peace attended. 'Loss of innocence' was so apt. We can't just sing and talk of peace people we have to act!!!!!!!! Think of the children ring fenced from (our reality)."

"I went to a talk today.

I like to think I know about things going on in the world... but there is much I do not know. I want to try and change the world a little today with information.

These are weapons, designed specifically to kill people and maim those not in the direct vicinity. Men, women and children.

There are children who go to school traumatised because they do not know when the next weapon will rain down on them taking away their family and friends. and on occasions, their buildings are bulldozed with them still inside. if they run outside they get shot.

This is happening in our world today. not in the past. It happens on a daily basis.

I am not telling you this to appeal to you to do anything. there is not much anyone can realistically do unless they wish to donate to some organisations that are helping. that is not why I am writing this.

I just want people to be aware. Please pass it on."

"There is so much going on in the world that I do not know about. I knew there was *something* going on in the Gaza strip, but this talk opened my eyes. well it's clichéd to say such a thing, I have to be honest, I am not going to change my habits from this talk, that would be uncharacteristic and dishonest, but I will remember it and I will be sure to pass on the message any time I am in a discussion about this topic. Thanks to Rod, I have been given the power of information and can help to spread this particular story. I am also sure that some day when I am developing video games, the thoughts and wishes of these children and their teachers and those they have touched, will be brought to a wider audience.

To think, many people in the world have no idea these people are trapped and being bombarded with weapons designed to mutilate, maim and kill people indiscriminately.

If nothing else, I think I would like to make sure my friends and family are aware of that fact."

"How many of you know that there are people, families, children, trapped in a 7km wide piece of land, unable to go anywhere and being bombarded by weapons designed to maim and kill people indiscriminately?"

"If anyone is interested in supporting Palestinian children my NGO, Al-Noor Foundation are hosting a fundraising event next Sunday 26th May 10:30-5-30pm (coffee and cake day) [at Denbigh Chocolate Shop] - £5 per ticket; proceeds go towards the Bethlehem Summer Camp where we are hosting a six week educational and creative arts programme with short film and documentary making. You are all welcome to join. The more the better, the greater the awareness, the closer we come towards united steps of solidarity and peace."

"thanks again xx so worth coming xx"

See also: more of Stillshooter's photos from the evening

Rod Cox's Chester and Palestine Exchanges website. The exhibition is available to be displayed anywhere for the cost of transportation. It is ready-mounted on 12 x 1 metre wide x 2 metre high display boards.