Hunt Saboteurs have today welcomed news that PC Sarah Ward, from North Yorkshire Police is no longer in position as a Wildlife Crime Officer. This comes after a complaint made by a saboteur about the officers link to the Badsworth & Bramham Moor Foxhounds. 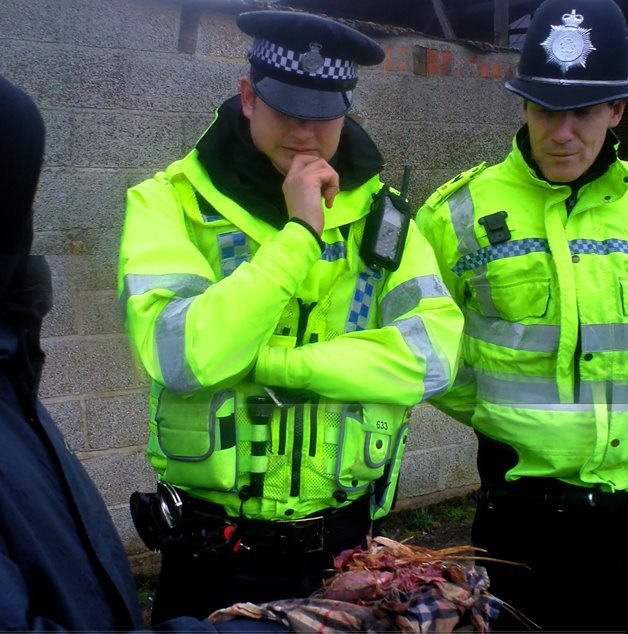 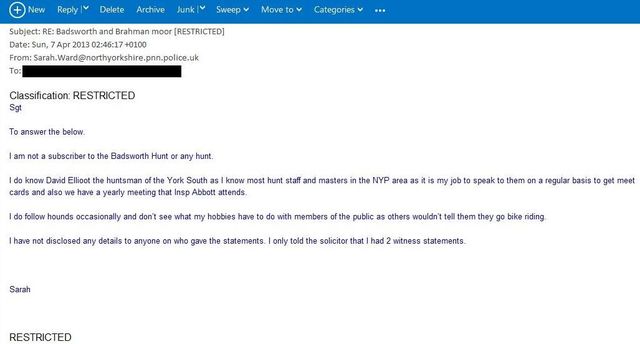 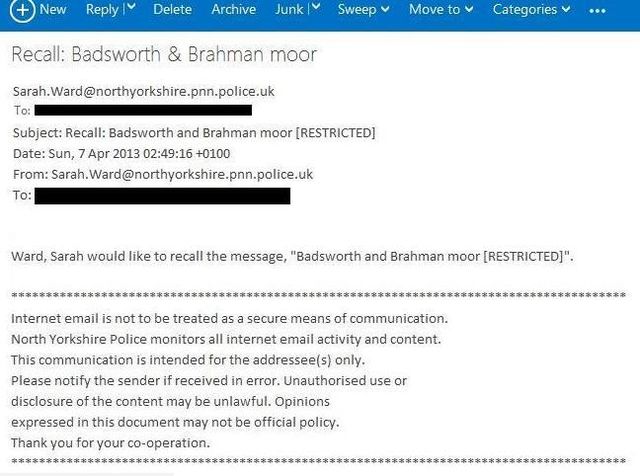 On 9th March 2013, Sarah Ward had been involved in a case in which the York & Ainsty South Foxhounds had been accused of deliberately illegally hunting and killing a fox at a meet near Escrick Park, North Yorkshire. Saboteurs from Sheffield and Manchester had witnessed the huntsman lead the hounds into a large area of elephant grass, where they quickly picked up on a scent of a fox. They reported that the hounds were encouraged by the huntsman before catching and killing the fox (see

http://sheffieldsaboteurs.wordpress.com/news/north-yorksire-police-ignore-illegal-hunting/) . Two red coated members quickly rode away with the fox’s body and only entrails were left. The saboteurs presented the entrails to police officers in attendance (pictured) and Sarah Ward was called to take statements from witnesses. The questions asked by Ward were geared more towards gathering more information on saboteurs than the incident in question.

Sarah Ward had also been involved in a case where it was alleged that the Y&AS terrier men had dug into a badger set on 17th December 2011. No action was taken and we can only wonder if there have been other cases she has thrown out. She was also involved in a failed case of “trespassing to disrupt a lawful activity” against hunt sabs in 26th November 2011, when the saboteurs had stopped an unlawful dig-out of a fox.

Hunt saboteurs were informed that Sarah Ward rides with the Badsworth & Bramham Moor Foxhounds who saboteurs allege consistently and routinely flout the Hunting Act 2004. In an email, the hunt saboteur witnesses challenged Ward on her involvement with the hunt and she responded (pictured): “I do follow hounds occasionally and don’t see what my hobbies have to do with members of the public as others wouldn’t tell them they go bike riding.”, a few minutes later two attempts were made to recall the email (pictured). This information was then used to make an official complaint about Ward being biased in favour of the hunt.

Following the complaint, a letter from North Yorkshire Police, dated 12 April 2013 reported that Ward “will no longer deal with similar matters or any wildlife crime”. Saboteurs working in the North Yorkshire area welcome this decision and hope that Ward’s successor is someone who actually cares about wildlife crime, and not potentially a part of it..

Lee Moon, press officer of the HSA stated:
“North Yorkshire Police have clearly made the correct decision in removing Sarah Ward from her post as Wildlife Officer, but the question should be asked what vetting procedure is used as well what training and expected skills are required regarding this post. Clearly there is a failure in the process so far. Although hunts ‘could’ be acting legally considering the frequent convictions using the hunting act, the claims made in the press by the Countryside Alliance, and the clear intention to return to legal hunting as soon as they can, any person who rides with a hunt cannot be seen as a fit person to be a Police wildlife officer. We assume all Wildlife cases she has been involved in will be reviewed, especially the most recent cases and appropriate actions taken by the police.”