[Utrecht, NL] The Ubica-eviction: a report

Squatters resist the eviction of the 21-year squatted Ubica in the centre of Utrecht. Town hall painted and barricade set on fire in town square. Cops take until following afternoon to cut final lock ons and evict everyone. 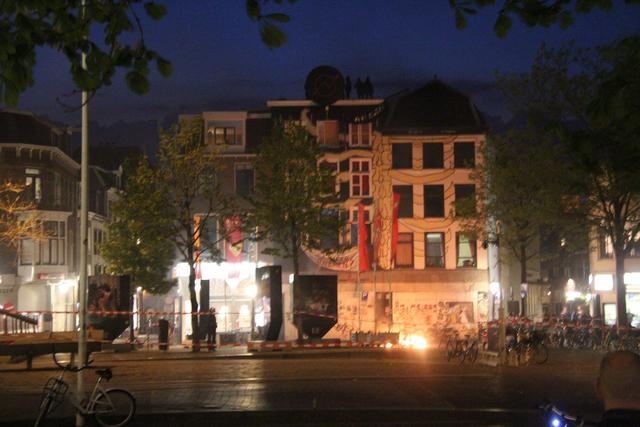 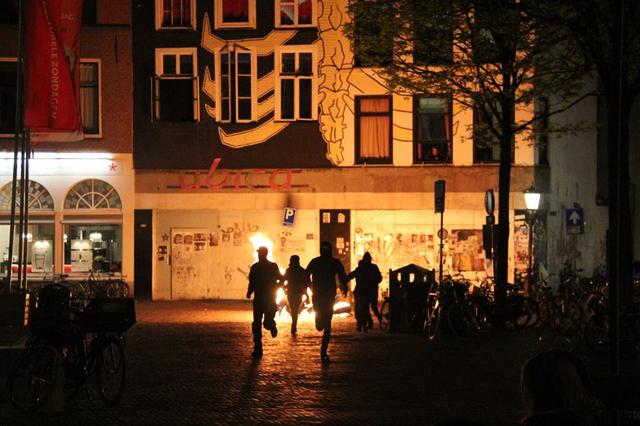 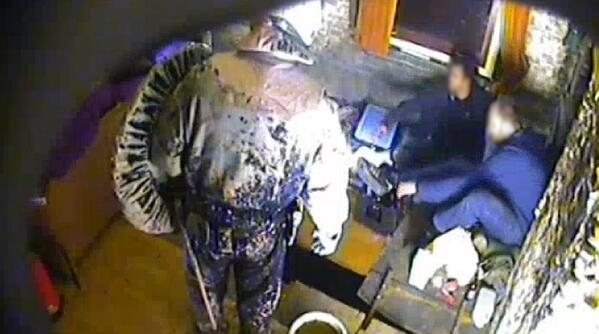 The following is crossposted from:

Suddenly, they came storming out. They were about ten or fifteen. Black clothes and balaclavas. They had a fire extinguisher, a ladder and some tires on them. And gasoline. The great final act of the sad drama of the fall of Ubica was unfolding.

Up to about eleven o'clock the tension was so thick, you could cut it with a knife. Nobody knew what was going to happen, except three nervous nail biters on the terrace of a café on the Ganzenmarkt, the square on which the Ubica is situated, the place that offered the best view of the spectacle that is the Ubica eviction, last Friday. It seemed like such an ordinary Friday night for the beer drinkers on the Ganzenmarkt. Another workweek gone by, another night consumed away. Nothing's out of the ordinary, tomorrow is day like any other. But those three visitors knew better. They had heard that the squatters would not just give up their autonomous space after 21 years. "Not without a fight", was announced on Indymedia. But of course no time was specified so it came down to nail biting and suspenseful waiting. One thing was certain: in a little while the town hall would receive a make-over.

If you had gone to order a beer you would have missed the spectacle. As fast as they came, the “ninjaesque types,” as they were described in the media later, disappeared. Suddenly the city hall was blue and the square was on fire.

It was clearly a well-coordinated action. The group knew exactly what it was doing. The city hall was decorated with blue paint and the window received a good smacking with a fire extinguisher. Meanwhile, someone else spray painted a surveillance camera. And right in front of Ubica was a barricade of tires set aflame. Among the jet-black smoke from the tires, which filled the whole square, the black-clad people disappeared. On the roof of the Ubica people with balaclavas appeared. A banner rolled out of the window: “Vloet mag de Ubica weer ruïneren?” [“Vloet may let Ubica fall to ruin again?”] And from the roof: “KOM MAAR DAN!” [“COME AT US THEN!”]

At first, the audience stood and apathetically looked on. But then, when the tires began to crackle, they woke up. The people on the roof had in the meantime lit some skyrockets. Free entertainment on the weekend! They were not expecting it. They filled the show with a cascade of prejudices: hippies! profiteers! They're on benefits! They do nothing all week! Unfortunately, they were unaware that they were spectators of a historical moment. Witnesses of violent resistance against capital - who would have dared to even dream of such a thing in 2013?

It took a while for the police to arrive. The first two cops that arrived panicked. They tried to close off one half of the square about three times, forgetting the other side of the square - or not daring to come near it. The squad on the roof had enough paint bombs ready to fill the whole square.

Using a megaphone the police ordered the disaster tourists to leave the square. They were completely ignored. It was only when the police on the square began being pelted by paint bombs that it immediately became empty. A heavy skyrocket was fired at the square. It was probably aimed at the police car parked in front of the town hall.

Suddenly the popo were everywhere. Plainclothes, mounted cops, riot police, cops in ordinary uniforms, even the city guard and a helicopter were deployed. From that moment on no one could come on or leave the square. The people who lived right next to the Ubica were out of luck. They had to wait until it was evicted before they could go inside. The evacuation took sixteen hours.

The initial shock on the terrace was gone. Little was happening outside. The fire on the square spread to a trashcan next to it. The people on the roof had the square well colored and threw occasional heavy fireworks down. The police waited, the residents inside had their house barricaded in every possible way and chained themselves to the house. It must have been very thrilling inside, but outside it was especially cold. Drunk consumers began teasing either the police or the squatters. The lights that shined on the city hall, were turned off when the press arrived.

A dark blue riot control van stopped in front of the Ubica to film the building, probably with an infrared camera. After half an hour the van, now pink, drove away.

The riot police had found an entrance, on the side. Using a staircase they climbed. From the café it was not visible what exactly they were doing, but it was audible. The single cop who returned, was almost unrecognizable as a riot cop: completely covered in paint.

Not until 3 PM the next day was the last squatter removed from the house. It must have been a tiring night, but the setup was successful. Not apathetically waiting until you're dragged out of your home, but going into a frontal attack and making it as hard as possible for the cops to evict you. It's sad that after 21 years the Ubica will fall back into the hands of Vloet. And if it was inevitable, then at least under heavy resistance. And they succeeded very will in that. The squatters have taken matters into their own hands and have posed a noteworthy opposition to the violent reality that is capitalism. An example that we can all learn from, squatter or not.


LATEST: 11 people were arrested. 10 still in custody and will find out around 6pm (NL time) whether they will be held in remand and not released before trial. Updates here: