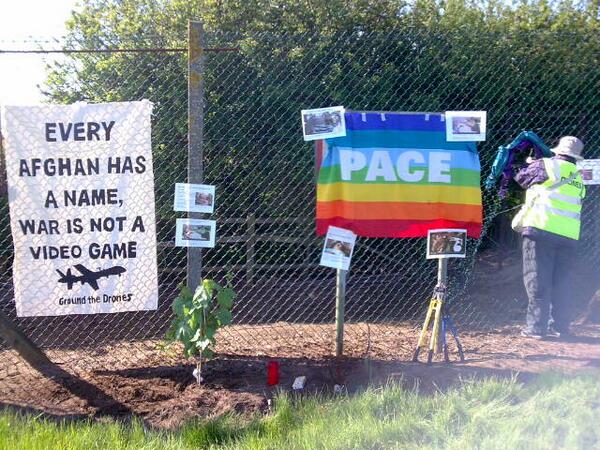 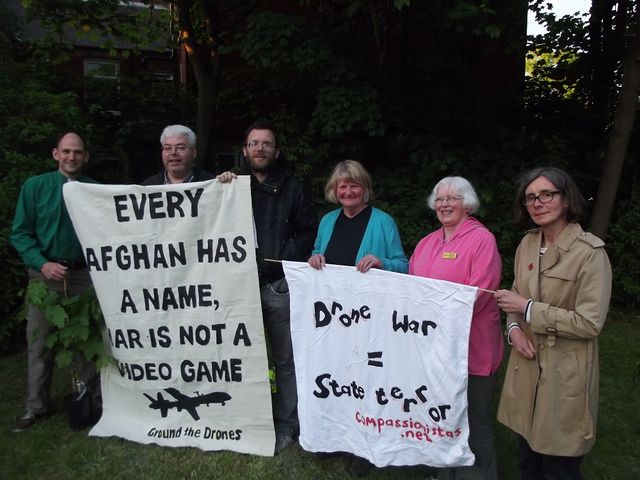 THIS MORNING six peace activists, representing “Disarm the Drones” will become the first activists in Britain to be arrested and charged for anti-drones related offences, they were kept over-night at Lincoln police station after they planted a peace garden in RAF Waddington yesterday morning, they’ve been charged with Conspiracy and Intent to Trespass and Cause Criminal Damage.

The non-violent peace activists ‘DISARM the drones 6’ managed to breach security at Britain’s top security drone control base in Lincoln. Their threat was considered so serious they were kept over-night and sent straight to court this morning and their homes were raided by police last night and computers have been seized.

Their action was timed to coincide with the fifth anniversary of the first UK Drone strike and the International Day of Innocent Children Victims of Aggression.

The six individuals, who took in news stories about civilians killed as a result of drone strikes were: Chris Cole (Drones Researcher), Martin Newell (Catholic Priest), Dr Keith Hebden (Anglican Priest), Susan Clarkson (Quaker Pensioner), Henrietta Cullinan (Teacher) and Penny Walker (Grandmother). They all felt moved to act after British Armed Drones (Unmanned Combat Aerial Vehicles) became operational from British soil on the 25th April 2013, and the MoD has since confirmed that British drones controlled from RAF Waddington have made their first kill in Afghanistan.
Serious legal questions have been raised by the UN, Britain and the US about the legality and morality of drones, especially around their use in undeclared wars.
Chris Cole, anti-drone campaigner, from Oxford said, “To build real peace and security in our world we need to breech the silence and secrecy that surrounds remote warfare and expose the impact of the drone wars on global peace and security as well as the lives of ordinary Afghans.”
Penny Walker, grandmother from Leicester, said, “We created a gateway and peace garden at RAF Waddington in order to make a way for other people of peace to do their civic and moral duty and disarm these drones.”
Dr Keith Hebden, Anglican Priest said, “After entering RAF Waddington we planted a Vine and Fig tree, echoing the words of the prophet Micah, ‘they shall all sit under their own vines and under their own fig trees, and no one shall make them afraid.”
PICTURES SEE WWW.twitter.com/zerohourstogo
---

Chris Cole, father of 3, is a leading authority on drone warfare and runs the organization ‘Drone Wars’
Susan Clarkson is a Quaker pensioner who visited Kabul earlier this year with a peace delegation, she met civilians who had lost innocent loved ones to drone strikes.
Dr Keith Hebden, father of 2, is an Anglican Priest and author of “Seeking Justice”
Penny Walker is a Grandmother and works closely with the asylum community of Leicester
Father Martin Newell is a Catholic Priest who runs a night shelter for asylum seekers in London
Henrietta Cullinan is a Mother of 4 and a School Teacher

Flowers of love!
Lush shops throughout the UK support the campaign against the Drones age!!