Social Justice and Environmental Campaigners demonstrated at the High Court of Justice, London.

Today desperate Coal Company - UK Coal sought to over-rule the community, Durham Council and the Secretary of State’s Inspectors to be allowed to mine over half a million tonnes of coal from rural County Durham. 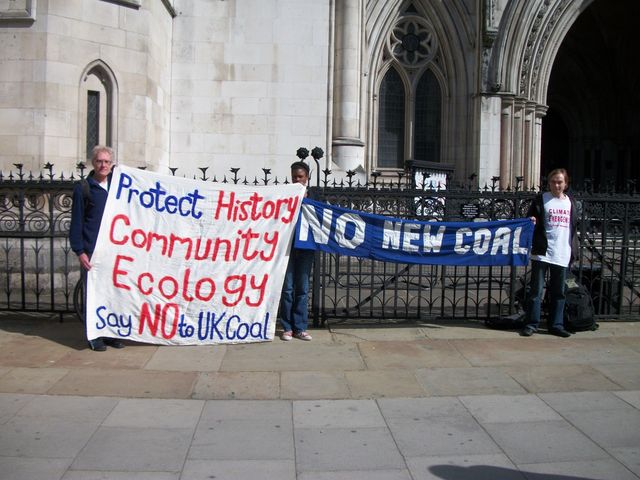 Today was the first of two days of a judicial review into the decisions made against the mine. The Coal Action Network and other groups including the London Mining Network, came to support the previous decision and show the coal companies that they still face fierce opposition to this and there other opencast mine applications.

The decision should be announced tomorrow, 6th June 2013. If the Judge finds that the public inquiry to be significantly unlawful then there will be another inquiry. It is likely that this would take 3 weeks like the first one. This causes members of the community stress and uncertainty. It is feared that if this mine is given the go ahead then extensions and further applications in the area will result.

UK Coal are in a difficult financial situation and local contractors are no longer supplying goods on credit at their Potland Burn site in Northumberland. UK Coal are trying to avoid their pension obligations with regards to Daw Mill Colliery and cannot be trusted to keep to planning stipulations or restore sites. Burning coal for power is unsustainable and causes local and global environmental issues.

At appeal the Inspector for the Secretary of State said that the plan had an unacceptable impact on the environment and amenity of local communities and that the community benefit did not outweigh the damage. At the planning hearing the councillors voted unanimously against the decision and councillors called UK Coal ‘thugs’ and ‘vandals’ saying they were trying to bribe them with road improvements.

The site at Bradley is of high landscape value, currently there are newts, bats, red kites, historic mines and wagonways. The area is well used for walking and playing by locals and tourists. There is a strong campaign in favour off the valley and against the UK Coal application see

For more information see coalaction.org.uk or look up The Coal Action Network’ on Facebook.