Boo Boo, a clothing outlet in the UK, is not the only concern banning pig flesh.
2 Airlines, 6 US State Prison Systems Ban Pig Flesh 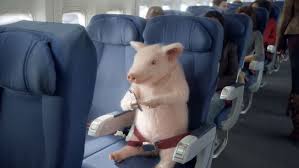 07 Jun 2013
The growing clout of the over 1 billion Muslims in the world has registered in the ban on pig flesh on Qantas and Virgin Airlines as well as in the prison systems of Arizona, California, Florida, Maryland, Massachusetts and Ohio.
pig.jpeg
Qantas Airline Bans Pig Flesh

Qantas, which just forged a partnership with the Middle Eastern airline Emirates, has banned all pork (flesh of murdered pigs) on its menu for travelers going to and from Europe in respect for Islam.

The airline has a stop in Dubai, where the flesh of pigs is forbidden, The Telegraph reported.

In addition, Qantas meals will abide by Islam prohibitions on alcohol. All food prepared for first-class, business and economy travelers will be alcohol-free, in line with Islam’s mandates, The Telegraph said.

A spokesman for the airline said its ban is not really that significant.

“Qantas in-flight catering often reflects the cultural and regional influences of the international destinations we fly to,” the spokesman said, in The Telegraph. “On flights to and from Hong Kong and China, our menus include regionally inspired dishes such as stir fries and to Singapore we have noodle options.”

Qantas is not the only airline that bans pork. Virgin Australia doesn’t serve pork on any flights to and from Abu Dhabi, The Telegraph reporeds. Moreover, these flights also make sure the meals are prepared in line with Islamic law.

When a Muslim inmate at an Ohio prison brought a lawsuit because halal food was not among the dietary options, the state went him one better. Not only did it agree to begin serving meals prepared according to Islamic law. It banned pork from its entire prison system.

The lawsuit was brought by Abdul Awkal. In documents filed in federal court, Awkal’s attorney claims that the state is infringing on his client’s First Amendment religious freedoms by failing to serve animals butchered in a manner consistent with the Koran, even though kosher meals are currently made available to Jewish prisoners.

The Koran also prohibits Muslims from eating the flesh of pigs.

Now Ohio may be facing a second suit, this one brought by the state’s pork producers and processors.

The Ohio prison administration had shut down a farm in which pigs were killed for prison food.

Qantas is an Australian airline.

Australian companies have killed trillions of cows and lambs, and have made through the years trillions in blood money from their live animal shipping to Mideast Muslim countries. In so doing they have made Australia into a desert. However Australia's pig slaughter industry is not as big. It's time for Qantas to respect Hindus as well by banning cow flesh.

Lawsuits in US prisons have been based on the fact that Jewish prisoners are given kosher food but Muslim prisoners had not been
*
Microsoft has banned access to the email of an Islamic Vegetarian site.