Stop the Murder, Stop the Hate, Close Down the Group of Eight!

StopG8 have organised a week of action in London from 8th to 15th June, ahead of the UK G8 summit. Tuesday June 11th will be the big day, The #J11 Carnival Against Capitalism mass action will start at 12 noon on Tuesday June 11th, the meet-up points will be:

The action will finish with a ‘street party’ at 5:30pm, the location will be announced on the day. 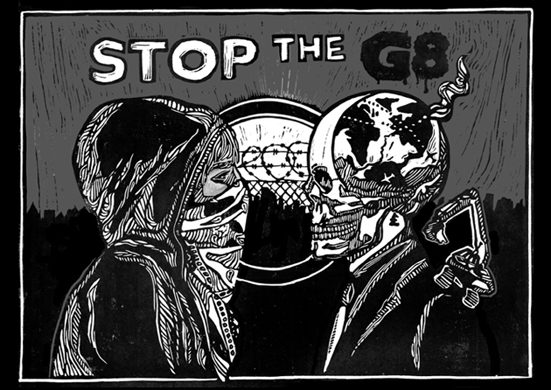 StopG8 have put out this message for those planning on coming to #J11:

"This action will only be as effective as the people participating. We have not negotiated with the police and we will not be controlled. If we look after each other, stay mobile, don’t get caught in kettles and are ready to make quick decisions about what to do next we can make the most of the day.

see you on the streets"

A map of targets for the day is available here.

Full details of the packed week of action, including a calendar of events,n useful contact information and details of the convergence space are available here.

Highlights from the calendar of events include:

They Owe Us Shift the Debt, 14th June, Canary Wharf: In response to the combined crises of cuts and climate chaos, and the call for a week of action against the G8, we have come together to organise a gathering of those who want to stop the assault on people and planet. In the penthouse suite of global capitalism, in front of the eyes of the financial elite we will demand that They Owe Us.

Arrive at Jubilee Plaza outside the west exit of Canary Wharf tube station for 12.30pm sharp.

The StopG8 week of actions and events ends with a big night of Militantn Music. Top hiphop MCs from London and Italy; African sounds; Jungle, Drum n Bass, Dubstep and Reggae through the night.

In support of Marina, Alberto & Francesco – jailed last year for the anti-G8 protests in Genoa 2001; and of families & friends fighting for justice for those killed in police custody in the UK.