Yesterday morning around 50 Shell to Sea campaigners kicked off the Week of Action against Shell’s experimental high pressure gas pipe in Erris by tearing up the bog road Shell has laid as part of its attempt to finish the pipeline. They also destroyed the sandbag dam that Shell were attempting to build across part of the estuary in order to be able to work on the pipeline route regardless of the tides. This was accomplished in full view of about 15 security from IRMS – the security company hired by Shell to repress protest. 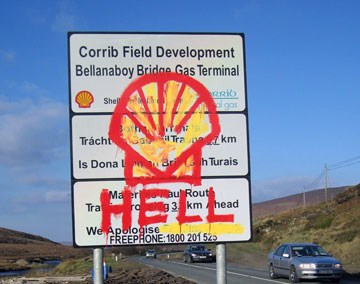 The camp has been set up at Argoose over the last couple of weeks and from Friday numbers here more than doubled as people started to arrive from all over Ireland and beyond. Shell have constructed a giant fortified compound at Argoose about 150m from the location of the Rossport Solidarity Camp.

The compound is ringed by a 3m spiked metal fence on which remote control video cameras are mounted to monitor the surrounding landscape. Even when no work is in progress the compound is staffed by a couple of dozen security guards, many of them equipped with hand held video cameras.

Two further compounds are in the immediate area on the route to the refinery Shell have built at Bellinaboy. The refinery & pipeline have met constant opposition from people living in the area for over a decade and since 2005 that opposition has involved hundreds of direct actions intended to slow down construction. Because of these the costs of the project has escalated from the initial estimate of 600 million to a current estimate of over 3 billion.

In their attempts to force the project on the local population Shell has had the full backing of the Irish state. Thousands of Garda have been deployed as well as Naval gunboats and the airforce at key moments of the project.

Dozens of people have been arrested and over a dozen jailed for at least a period. Hundreds of Shell to Sea campaigners have been brutalised by Garda and private security, several being left with permanent injuries. The political parties in government responsible for this have included Fianna Fáil, Fine Gael, Labour Party & the Green Party.

National opposition to the project has grown as the extent of human rights abuses directed at Shell to Sea campaigners have become known. The campaign has also succeeded in revealing the Great Oil & Gas Giveaway to the extent that mentioning it has become a common feature of any phone in discussion of the economy.

Under the giveaway oil corporations are given any Oil or Gas they find and are only expected to pay a miniscule 25% tax rate on the profits of their sales after they have been allowed to write off all costs associated with operating in Ireland.

The typical creative accounting & tax avoidance of mega corporations means that in reality they may pay nothing at all. Oil industry experts have stated that they expect Shell will pay no tax in relation to exploiting the Corrib field. The terms under which the Irish state gives away Oil & Gas found in and around Ireland are amongst the worst in the world, worse even that those imposed on American occupied Iraq or Nigeria.

The Week of Action organised from the Rossport Solidarity Camp will run all through next week and over the weekend. Anyone concerned with Shell’s abuses in Erris or with the national giveaway of oil & gas is encouraged to come to Erris and stay at the camp or one of the near by bed & breakfasts.

You don’t need to be willing to risk arrest in carrying out an action to be useful down here. There are loads of support roles people are also needed to help with from documenting what is happening with cameras to chopping the carrots and doing the dishes for the collective meals. Many of those here now have been to Erris several times but there are also quite a few people for whom this is their first time and you will certainly be made welcome.