Massive protests are sweeping Chile as students and workers demand a reversal of school privatization drives and wealth inequalities gripping the country. 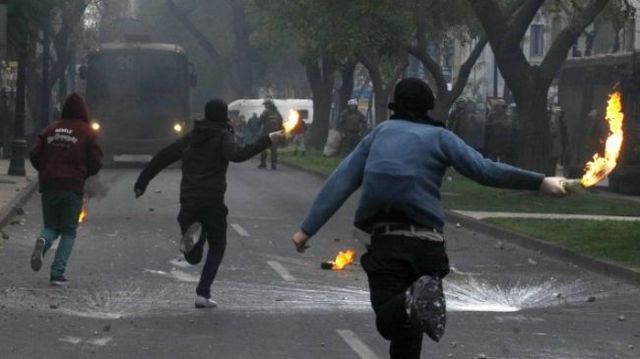 (Molotov) Cocktails for the Cops!

Chile police have arrested 224 students, including some 100 minors in protests and sweeps to clear schools of occupiers demanding education reform, said media reports.

According to the country’s Interior Minister Andres Chadwick, protesting students occupied 28 schools including 21 in Santiago's metropolitan area and seven in four other regions of Chile. These schools are to serve as polling stations in upcoming presidential primary elections on June 30, 2013.

But a June 27-morning operation by police evicted the dissident students occupying the schools.

However, the students said they are finished talking with the government of president Sebastian Pinera and have stepped up protests in demand of free, quality education with an eye to upcoming parliamentary and presidential elections in November.

The student movement, which began in 2011, held massive protests June 26, 2013 that included the participation of teachers and healthcare, copper and port workers.

In the hours before the national march, students attacked and briefly occupied the ministry of education. Another group protested outside Codelco, the state-run copper mining company, with signs reading "Copper for Education" in reference to Chile's massive revenue from copper exports and student demands for free university education for all.

Thousands also marched on June 26, 2013 in the southern city of Concepción.

The dissident students described the protests as a success and condemned the violence, and indicated they will be taking part in a nationwide strike on July 11 organized by the trade unions.

The country's powerful student movement has staged massive protests to demand free and improved education in the stratified country over the past two years, during which thousands of students have taken over schools and universities intermittently. The students have demanded a wider redistribution of the country's copper wealth, a reform of the educational system putting the state back in control of mostly privatized public universities, and tax increases for the rich.

Chile television channels showed police bursting into schools barricaded with chairs and isolated clashes between youth and police early on June 27, a day after a march for education reform.

Student leaders have countered that the political establishment in Chile, ranked the most unequal country of the Organisation for Economic Cooperation and Development, does not represent them. "This is continuing to seek out confrontation and not profound solutions to the problem of education," said former student leader Camila Vallejo, who is now running for a seat in Congress.

Massive protests are sweeping Chile as students and workers demand a reversal of school privatization drives and wealth inequalities gripping the country.

Chileans of all ages joined the protests, which are driven by a range of issues. Much of the energy comes from the ranks of public schoolchildren. Instead of football or skateboarding, teenagers often gather after school in public parks to draft declarations and manifestos.

“The only way in which education reforms respond to what the country in demanding is if there is direct participation from all social actors," declared Andrés Fielbaum, leader of the Student Federation of Universidad de Chile.

More than half of all schools and universities in the country are in private sector, which runs for profit. The country is known for lowest public spending for education, which deepens wealth inequalities and increases disadvantages the poor.