The first Leeds Dignity for Asylum Seekers protest was fantastic! It was part of a national day of action, which saw protests in Bristol, Sheffield, Bradford, Birmingham, Manchester, Glasgow and Cardiff. There was a great atmosphere with special thanks to our friends from Bassa Bassa for all those fantastic tunes. It was great to see so many faces and let's continue to build on this. 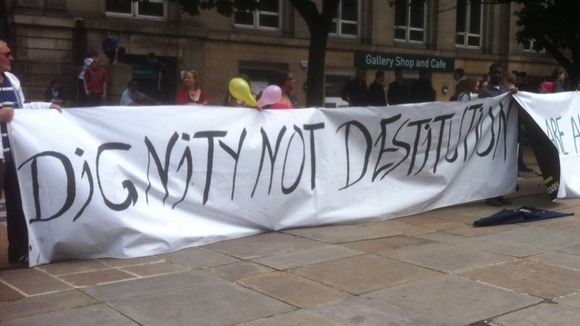 Asylum seekers, refugees and supporters stood together giving out leaflets explaining the truth about asylum seekers and holding banners to get our message out : enough is enough, the government's racist immigration policy is inhumane and must change. We called on Leeds City Council to join Bristol, Glasgow and Sheffield in condemning the govenment's policy that forces asylum seekers still fighting their cases into destitution.

Asylum seekers from Leeds spoke about their experiences, here are some of them:
'' Why does the government not allow me to have a national insurance number so I can work and pay taxes. We don't want benefits. We are not beggars. We want safety. Back home we had a family and a life, but here we are treated like orphans. It is not right that asylum seekers are forced to wait for a decision for so long. Do something! We are human beings with the same needs as you.''

''As asylum seekers we are tired of being treated like we are not human. Asylum seekers are left in limbo for years. As we are not allowed to work, we can't contribute and help this country. It forces us to do illegal work. We suffer many health problems due to stress, depression, anxiety...any day we could be taken and put in detention or deported. We are asking the government for the right to work so we can contribute to the economy of this country.''

J was forced to carry out female genital mutilation in her village. When she refused, she was tortured. She managed to escape and fled to Britain to seek safety. She is one of many asylum seekers to be trapped in the unjust immigration system which keeps people in a state of limbo for years. Not yet granted refugee status, she had to report every 8 weeks to the UK Border Agency's Waterside centre.
A few weeks ago she was unexpectedly detained at her routine signing and given removal directions for a forced deportation. She was immediately taken to Yarl's Wood detention centre without a chance to collect her belongings or medication. With just a week to try and make a legal challenge, her and her supporters worked hard to try and stop the deportation. Despite having numerous medical problems, many of which brought on by the stress of dealing with the UKBA, J campaigned hard and refused to be deported. She is still in Yarl's Wood waiting for news of her bail. J's supporters were able to phone her and pass on a message: ''Thank you to everyone who has supported me so far. Many of the women in Yarl's Wood have been imprisoned here for 3 months, 6 months...conditions are very bad. I am diabetic but the food is not healthy and my sugar levels are not good. There are over 100 women where I am and we are all suffering. Please do want ever you can to tell people about this.''


We had a facebook message from Adam who's originally from Darfur. 'Please tell my story and help me get out of detention''
Adam fled from Darfur in 2011 and managed to get to Italy. However the Italian immigration system is notoriously bad and also Adam did not speak Italian so it was very difficult. He left to try and get to England. Due to British colonialism, many asylum seekers have english as a second language and so feel they have more chance to contribute in english speaking countries like the UK. However instead of granting Adam refugee status, the UK Border Agency locked him up in Dungavel detention centre in Scotland for 2 months. Due to the illogical Dublin II agreement, asylum seekers must claim in the first EU country they enter so Adam was deported back to Italy where he was imprisoned for 2 weeks and then released. Dublin II means that poorer countries such as Greece, Italy and Spain take the majority of asylum seekers and the richer countries avoid the responsibility. This forces asylum seekers to undertake incredibly risky journeys to try and enter UK, France, Germany and Scandinavia in the hope of finding safety and work. Adam left Italy, went to Calais and met No Borders activists there. He then set off to Norway in the hope of making a life there. Unfortunately he is currently in detention in Norway where he has been for 9 months. This is just a glimpse at the patience and courage it takes to seek sanctuary. Many people are forced to make arduous and risky journey s due to the racist immigration laws. It shows how lives are literally on hold as people travel from place to place, detention centre to detention centre in the hope to find a home.

Sanaz highlighted the problems faced by international students and also her own campaign against Leeds University. Please sign her petition if you have not already:

We are also joined by Fabian Hamilton Labour MP for Leeds North East who spoke about his work in supporting asylum seekers.

The following messages of support were read out:

The Lord Mayor of Leeds, Councillor Thomas Murray, expresses his regret but a prior engagement prevents him from accepting your kind invitation to attend the 'Dignity for asylum seekers, we are human just like you' event on Saturday 29th June. The Lord Mayor sends his best wishes and hopes your event is successful.

Bishop John Packer, Ripon and Leeds.
This comes with my best wishes for the event and for all the work which is being done to seek to ensure that those seeking sanctuary and asylum in our country are never forced into destitution but are given the opportunity to contribute to the life of our nation.

Leeds Green Party With the threat of the extremist far right and anti-immigration attitudes it is so important to stand up for the right to seek asylum. It is common sense and basic human decency that allows anyone to see our current treatment of those seeking asylum is utterly wrong. People are fleeing the most cruel realities. How can we call ourselves civilised or human when we turn them away or turn a blind eye?
We support the call for Dignity for Asylum Seekers and wish you all the best.

Alison Lowe Armley Ward Member Labour sends her support but her father is currently in hospital and so unfortunately she cannot join us.

Jonathan Bentley Liberal Democrat Councillor, Weetwood.
Unfortunately due a prior commitment I will be unable to attend but I do hope you have a successful and well attended rally. Great Britain established an enviable reputation for welcoming refugees and asylum seekers. From the Huguenots to the Kinder Transport we have opened our doors to the oppressed. Those seeking our protection have made huge contributions to the social, cultural and commercial life of our country.
Let's hope that we can re-establish those values and once again give all those seeking our sanctuary the welcome and dignity they deserve.

Ann Castle Harewood Ward Member Conservative
With regret, I won't be able to attend the Dignity for Asylum Seekers event. I attended the final of the Refugee Football World Cup at the Community Sports Centre at Thomas Danby College last year, while I was Lord Mayor and felt humbled to meet some of the people who have been forced to leave their own countries as a result of famine or persecution. Regards.Ann Castle

Huge thanks to everyone who came out to the Leeds protest and for all the messages of support.

The protest got coverage on bbc and itv news and in the Yorkshire Evening Post.