Julian Assange - "42 not out!" all to play for! Solidarity with Snowden & Manning

This following report on the ongoing trial of Bradley Manning is instructive on what issues are at play. 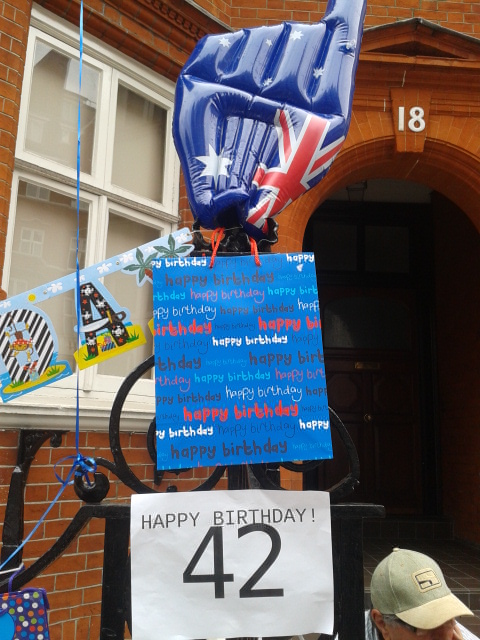 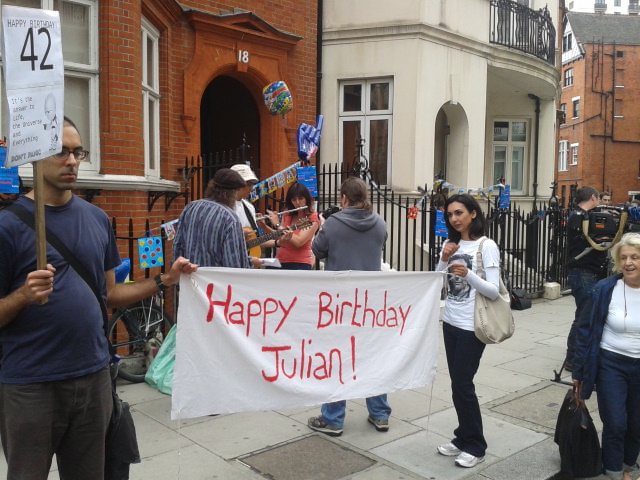 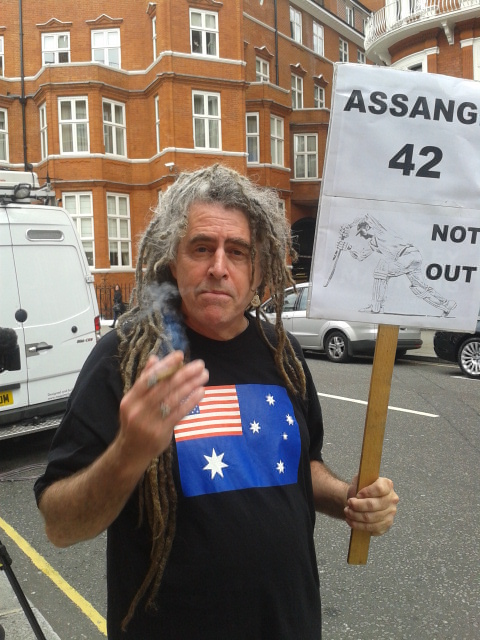 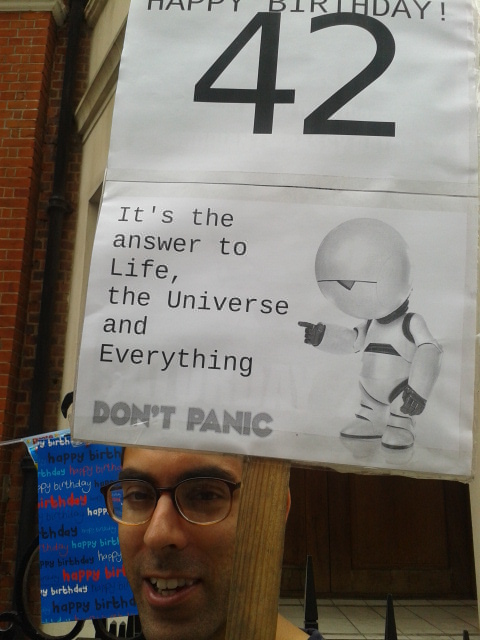 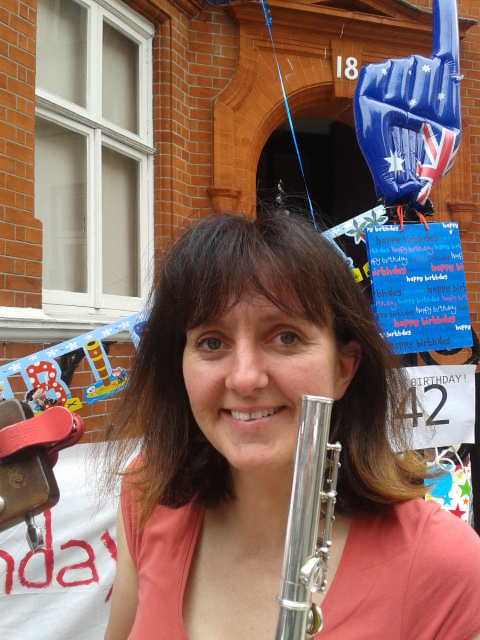 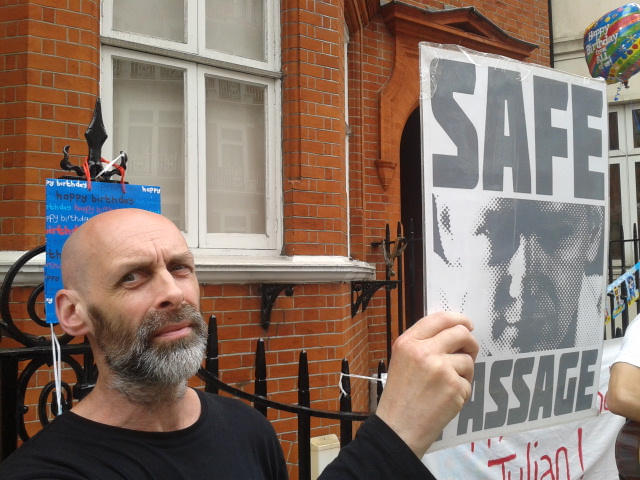 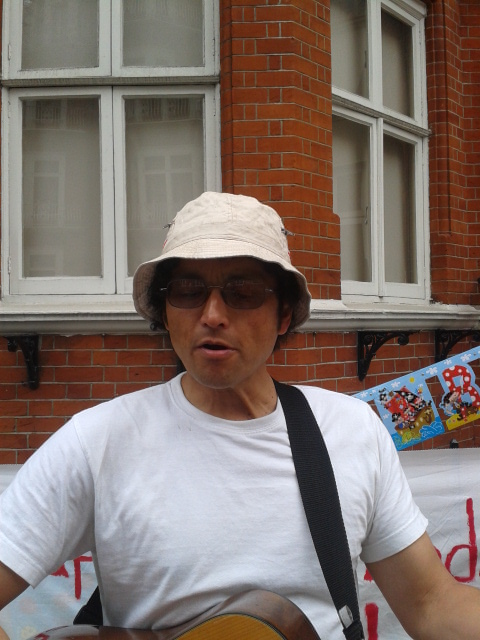 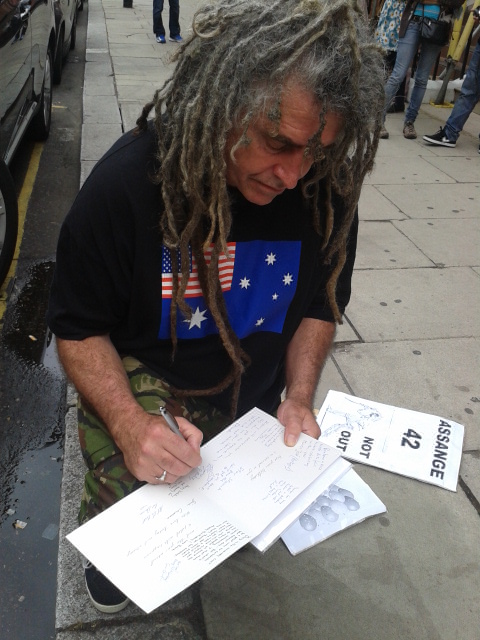 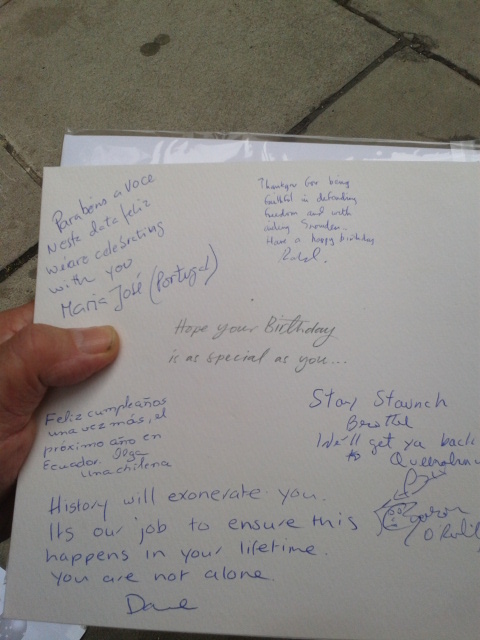 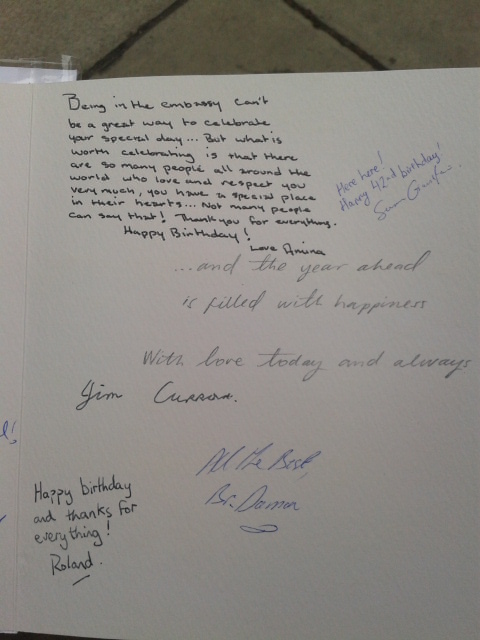 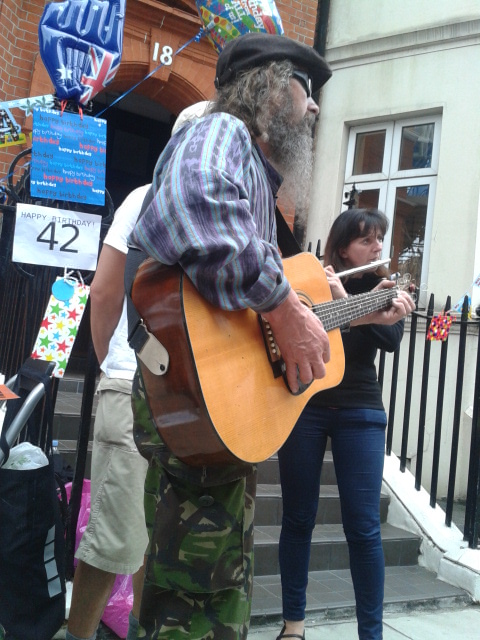 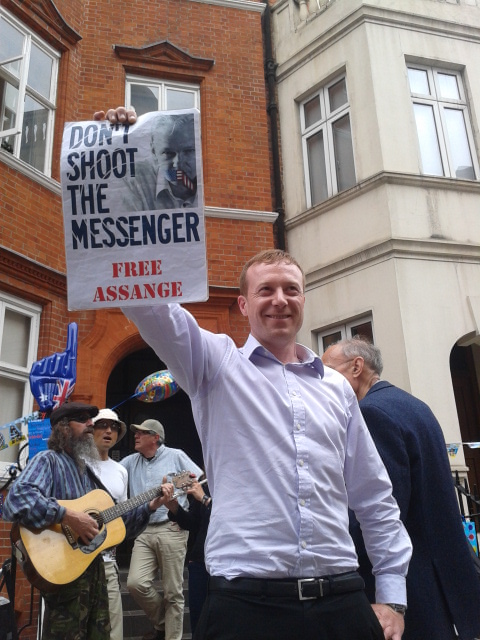 On July 3rd, approx 25 folks made our way to the Ecuadorian embassy in Knightsbridge/ London to offer solidarity to WikiLeaks and celebrate the 42nd. birthday of Julian Assange. WikiLeaks has been under siege by the U.S. empire since 2010 for exposing U.S. war crimes & the secret machinations of the daily grind of empire.

Julian has spent over a year surrounded by London Met police servicing a sealed U.S. grand jury indictment. The court martial of WikiLeaks source U.S. Private Bradley Manning is now in its 5th. week. Recently WikiLeaks was instrumental in helping N.S.A. whistleblower Edward Snowden escape the long arm of the U.S. secret surveillance state. Edward & WikiLeaks staffer Sarah Harrison are presently in the terminal of Russian airport as they seek sanctuary. This is a statement released by Edward Snowden in Moscow on July 1st.

Those of us who gathered on the 3rd. are a mixed bunch. Some are Catholic Workers who offer shelter to refugees fleeing U.S. sponsored warfare in Afghanistan, Iraq, Syria and throughout Africa. Some are South Americans who lived under U.S. sponsored tyrannies in Chile and Colombia. Some are long time anti-war & civil liberties activists. For others, offering solidarity to Julian, Bradley, Edward, Ecuador & WikiLeaks has been their first experience of activism.

We have built a solidarity community of sorts over these long two years of persecution of Julian and Bradley, through multiple court appearances and embassy vigils, through the abandonment of these courageous men by the peace & human rights careerists and bureaucrats in London town.

Aware that we are on the eve of the Ashes, we made a sign that read "Assange 42 not out!" and also a sign referencing the significance of 42 as "the answer to life, universe & everything" in "Hitchhikers Guide to the Galaxy."

We played music, sang songs and shared a cake baked especially for the occasion with the WikiLeaks crew.

The atmosphere of the gathering outside the embassy was impacted by the extraordinary events of the previous night when Spanish, Portugese, Italian & French governments competed in sycophancy by closing air space to the President of Bolivia on request by the U.S. The U.S. was panicked that Edward Snowden may be on the Bolivian Presidential plane flying from Moscow.

Closer to home, the Ecuadorian embassy also announced it had uncovered a bugging device in the embassy building.

A local mother and child undertaking their daily walk from school waved from across the road and yelled "Is it his birthday?" They smiled as we answered and sang "Happy Birthday" in Spanish and English. A glimmer of common humanity breaking through a stand off scene visually dominated by cops & corporate media.

Today July 4th. the U.S. celebrates its birthday with fireworks and anti-colonial retro imagery. Meanwhile the liars & killers
run amok in control of the levers of state. Those who expose the truth are in chains or running for their lives.

This following report on the ongoing trial of Bradley Manning is instructive on what issues are at play.
VID (9 mins)