When news of an unarmed black teen who was shot and killed by a "neighborhood watch volunteer" while on his way home first gained national attention last year, the phrase "I am Trayvon Martin" took hold as the official rallying cry of supporters looking, as Feministing put it, to lift the story "out of the particular." 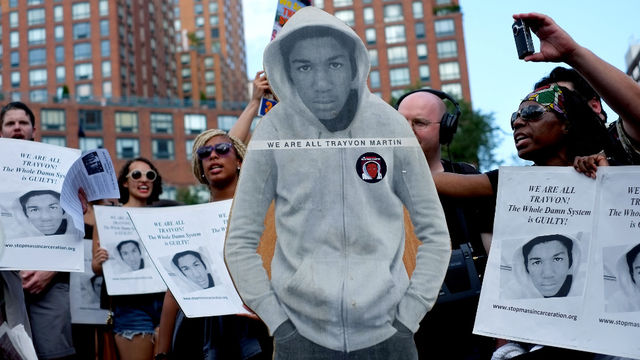 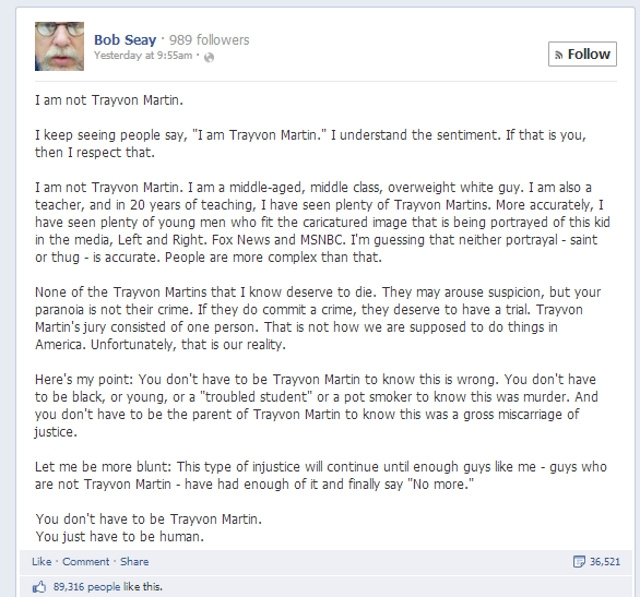 The manifesto that inspired the others*

But a counter-movement of sorts has formed in the aftermath of George Zimmerman's trial, and their rallying cry stands diametrically opposed to the original slogan.

The message remains mostly unchanged — Trayvon's death demands serious reflection and introspection — but the false equivalency has been stripped away.

Here are a few excerpts from the dozens upon dozens of missives posted in the last few days to We Are Not Trayvon Martin:

I am not Trayvon Martin. I have, for my own well being, lied about my race. My sisters call me the lucky one, because I can pass for white. I want to live in a place where being lucky has nothing to do with the color of our skin.

I am not Trayvon Martin. I am a 22 year old upper class white female. I have red hair and a trust fund. I speed on the freeway, and have never been ticketed. When I walk on the street, men offer to drive me home. Police officers smile and wave. Everyday, people trust me with their children.

They do not know that 2 years ago, I daily transported heroin across state lines. I could be in prison, just like any other junkie. I am not Trayvon Martin, but was the person he was suspected of being.

So much of the coverage and trial has been about race, Trayvon’s race, and what that meant for him. But all [too] often those of us who get the benefits of racism can’t see. We can’t see it because the world just appears normal. Living a “normal" life means i don’t have to think about race.

It is often forgotten that Trayvon Martin was also defending himself against a man who was clearly stalking him both in a vehicle and on foot, and posed an obvious danger — far more obvious than an unarmed teen holding a bag of candy in his own neighborhood.

The question is, if Trayvon Martin had "won" the fight that night and killed George Zimmerman, would he have been acquitted as well?

(*The manifesto that inspired the others)