A young woman was dragged by police from the ULU Cafe this lunchtime as shocked students looked on and tried to remonstrate with policemen. The woman is thought to be an activist for the ULU-based 3Cosas campaign, which works with cleaners in Bloomsbury to fight for pension rights and holiday and sick pay. University staff called police after people were allegedly seen chalking on the pavement outside the union building and on a small patch of Senate House Library, complaining of criminal damage to a Grade II Listed Building. The plaque on Senate House, which commemorates the founding of the building, had been chalked but later displayed no signs of damage after washing. 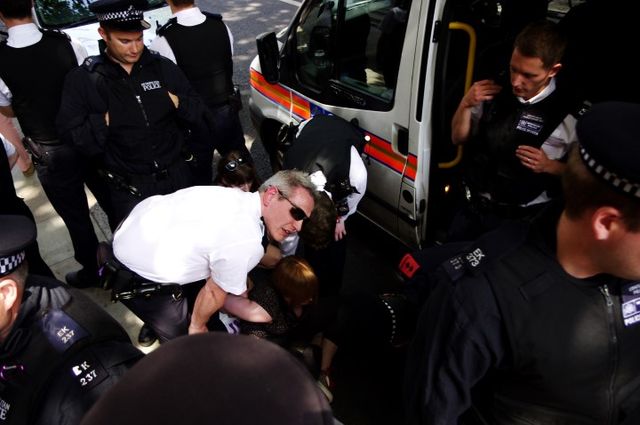 The arestee outside ULU surrounded by police 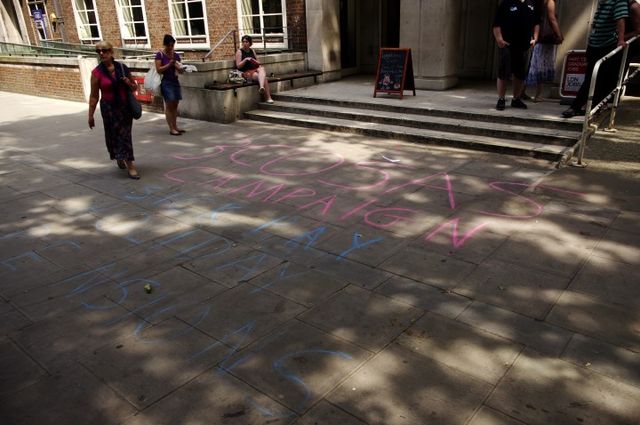 In a statement issued shortly after the event, ULU President Michael Chessum said: “The actions of both the police and the University today were a disgrace. The University must issue an apology, and intervene with the authorities to prevent charges being brought. If calling the police is an attempt to intimidate the 3 Cosas Campaign, it will not work.”
The woman was seen to be talking to two uniformed policemen in the foyer of ULU with a group of other activists. Shortly after that, she was seen to be pinned down on the floor by two policemen and arrested, screaming from the pressure exerted on her. She was dragged out of the building by two policemen while her friend was forcibly restrained. In the struggle, several tables were up-ended as police fought to keep a grip on the man, threatening to charge him with breach of the peace as he told them repeatedly to “Fuck off."
A riot van and extra police car pulled up to offer back-up, leaving the woman surrounded by an estimated seventeen officers. She was held outside on the road for around fifteen minutes before being shut in a van by a smirking policeman.

A statement from the ULU sabbatical officers

Campaigners were protesting to highlight the fact that the University of London does not pay its outsourced staff holiday pay, sick pay or pensions. If there are “crimes” on campus, it is the fact that many of the people who clean our buildings and cater our events cannot properly take days off when they get sick, have inadequate time to visit their relatives, and work significant periods of their lives with no prospect of a decent pension.

Chalk can be washed off – that is the whole point of chalk. Universities are supposed to be academic communities. They are supposed to be places in which the freedom to dissent is enshrined, and in which the community can collectively and critically exist. In this case, University managers and the police worked together to attack this. If calling the police is an attempt to intimidate the 3 Cosas Campaign, it will not work.

The actions of both the police and the University today were a disgrace. The University must issue an apology, and intervene with the authorities to prevent charges being brought.

If you want to support the 3 Cosas Campaign, assemble at 1pm at Senate House tomorrow to keep up the pressure on the University. (facebook event:

If you have opinions or witness statements, please email them to one of us:


A photograph was taken at 14:13 today of the alleged site of the chalking. The chalk had already been washed off. Video footage of incidents will be posted in due course. 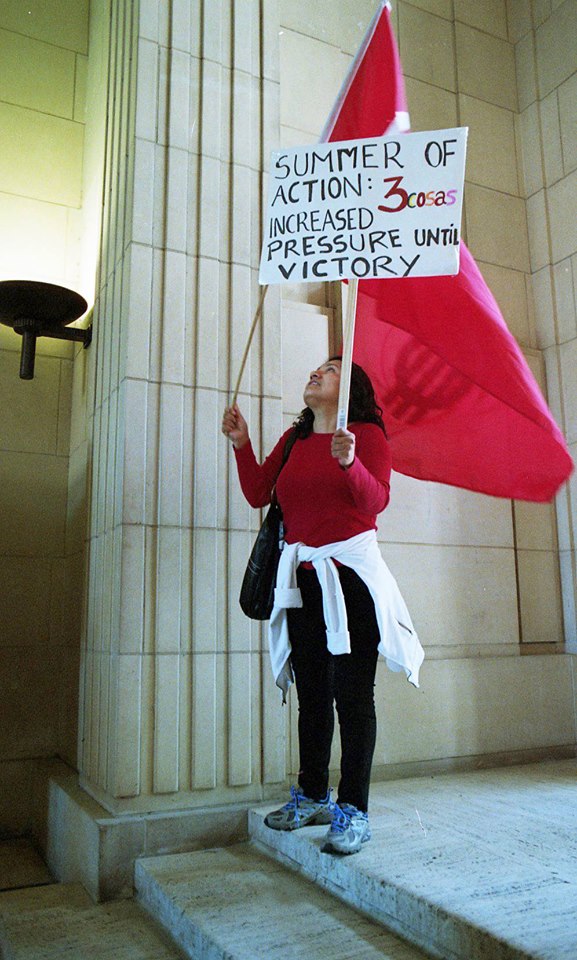 Even more important given that the University called the police on an activist today for allegedly chalking slogans in support of the 3 Cosas campaign.