Where Am I To Go? London Roma Evicted

WHERE AM I TO GO? LONDON ROMA EVICTED:
JOIN PROTEST ACTION TO MARK 2 AUGUST PORAJMOS COMMEMORATION 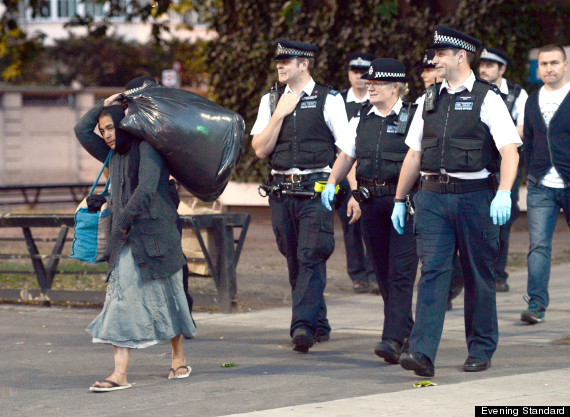 Above: rubber-gloved police smirk as they chase away Roma in a dawn raid on 19 July against the Marble Arch encampment in London's high-class Park Lane district, assisted by immigration officers and staff from the Romanian Embassy. Some seventy people, including children, had been sleeping in the open under blankets and plasic.

Below: in another dawn swoop, an encampment was destroyed at Hendon last month. Some families agreed to be flown back to Romania, while others were given 30 days to leave the country. The land on which they squatted is now under 24-hour security guard and is being sold to a major developer.

Britain has recently adopted the same cold-blooded tactics as France, Germany and Italy, breaking up camps, arresting, re-arresting, and carrying out so-called voluntary returns of EU citizens. Neither allowed to work nor to receive benefits, the legal excuse
for their forceful explusion is that they can't support themselves.

WILL YOU SUPPORT THEM? JOIN ROMA PROTEST ACTION

A samba band will lead a march to Marble Arch, scene
of the last ethnic-cleansing operation.

You are also welcome to participate in the Roma Genocide
Commemoration taking place at 5pm at the Hyde Park
Holocaust Memorial in memory of the 500,000 Roma
murdered by the Nazi.

At 3pm protests are being held outside the embassies
of the Czech Republic and Slovakia demanding an end
to neo-Nazi attacks and wide-spread apartheid in
education.