A wage, these days, is increasingly hard to come by, and increasingly precarious when found. The proliferation of agency work, zero-hours contracts and underemployment is well-documented. Microtasking, where people are paid per task to work from home for tech giants like Amazon, is perhaps the most developed form yet of this tendency towards casualisation and income insecurity. The idea of a job for life – itself nothing to romanticise – has been decisively consigned to the history books.

And yet, at the same time, the imperative to work remains universal. Hundreds of thousands of people are being forced to participate in workfare schemes in return for their Jobseeker’s Allowance. And with the new Universal Credit system, it is proposed to extend this so-called ‘conditionality’ even further, with mandatory 35 hours a week job searches, monitored remotely by Universal Jobmatch software. Even the unemployed are compelled to ‘work’. 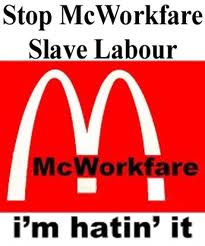 This presents a paradox: work appears to be both more scarce and more inescapable than ever. This contradiction says much about the present capitalist crisis, and about the possibilities for struggles within and against the conditions that led to it. We can begin with the concept of work itself. Even today, the iconography and imagination of much of the left remains haunted by the figure of the production line worker. Even as such traditional work has been automated away, or off-shored, or both, nostalgia for the post-war boom era of Fordist manufacturing and the welfare state is much in evidence, nowhere more so than the TUC’s “rallying cry” for ‘jobs and growth’.

One of the most powerful critiques of this narrow conception of work came from materialist and Marxist feminists, who drew attention to the silence regarding women’s unwaged domestic work. These theorists argued that tasks such as cooking, childcare, and cleaning the house became work when they were done for others. That is, it wasn’t so much the content of the tasks which made them work, but the hierarchical relations between sexes which saw the benefits of this unpaid labour appropriated by men and/or capital. Work then, was not defined by the wage, still less the factory, but by relations of quiet compulsion, which could include the wage but also patriarchal relations such as marriage.

Ecological feminist Maria Mies extended this analysis to critique the traditional Marxist focus on productive work. While it was important to understand how work produced surplus value for capital and reproduced capitalist social relations, she argued for a reconception of productivity as the production of social life. In place of the factory worker, she proposed the mother. Rather than making a virtue of work, we should be redefining it on our own terms as something potentially rewarding, social, and self-organised. Instead, it is the breaking down of boundaries between work time and non-work time, together with the disconnect of work from wages and capitalist production, that characterise contemporary labour. What Mies saw as potentially liberatory has been generalised, stripped of any emancipatory content.

Benefits conditionality, both through workfare and increasingly onerous job search requirements, exemplify this move. In a context of mass unemployment, nobody can seriously believe that unemployment is caused by the unemployed not spending enough time job hunting. Whilst workfare provides a de facto subsidy to businesses, requiring 30 hours a week of job searching serves no productive purpose whatsoever, even on capitalist terms. Research by the New Economics Foundation has suggested that we could move to a 21-hour work week with no loss of living standards. In this context, the universal imposition of work seems to have more to do with social control than expanding production. No new value, no economic growth, is created by requiring the unemployed to put in 30-hours a week in the virtual panopticon of Universal Jobmatch. But in a society based on work, where gains in productivity relentlessly reduce the amount of work that’s necessary, it plays an important role in regimenting and disciplining those surplus to the requirements of production.

This analysis suggests a rather different politics to the dominant ‘jobs and growth’ Keynesianism of the left. While the dismantling of the welfare state is certainly an assault on our standards of living, the conditions which made the post-war compromise possible – the long post-war boom, Cold War rivalry, the Bretton Woods system of capital controls – are long gone. Rather, as capitalism reverts to Victorian mode and the food bank queues lengthen, the welfare state looks more like a temporary blip, in a small proportion of countries, for a few short decades.

In place of a politics that calls for the right to work, we can reprise the call for freedom from work. The workplace remains an important site in this struggle, though we should be thinking as much in terms of resistance to speed-ups, casualisation, and the depredations of temp agencies as more traditional trade union collective wage bargaining. We can see how the resistance to benefits conditionality – such as workfare – and the reimposition of caring labour (such as by the closure or privatisation of crèche facilities), represent other fronts in the same struggle to live lives beyond work discipline.

Once upon a time, capitalism promised material advancement and personal freedom. Today, we’re told to be grateful for a Starbucks latté and an iPhone while being made subject to increasing police and bureaucratic control, be that from the cops themselves, or the DWP, Atos, UKBA and workplace managerialism. When we fight cuts or outsourcing, we need not defend work as such, but rather insist that our standards of living are not expendable on the whims and calculations of our managerial overlords. And as work is imposed on the unwaged, whether as workfare or caring labour, resistance to conditionality and sanctions regimes similarly insist that our standards of living are non-negotiable.

If these demands are really as unaffordable under the present political economic system as we are so often told (‘there is no alternative!’), then all the better. In a world where even Foxconn’s notorious sweatshops are being automated by a million robots, the relationship between work and production grows increasingly tenuous. One way or another, the future isn’t working.
____________________________________________________
This work is licensed under a Creative Commons Attribution-NonCommercial-ShareAlike 3.0 Unported License.