This is a report from the ACA Manchester group regarding the succesful James Larkin commemoration in Liverpool on Saturday and the seriously rubbish far-right opposition to it. There was an estimated 250 people on the march and a seperate smaller group of anti-fascists patrolling near-by. 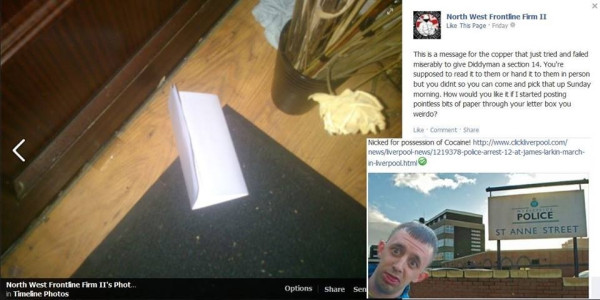 Yesterday saw the annual James Larkin commemoration in Liverpool successfully proceed from its start point to the final rally with no major problems. As per tradition, there was a baying mob of loyalists/fascists on hand to add to the ambiance of the occasion by screeching a wide range of insults at those on the march. Interestingly, whilst on previous occasions there has been a solid presence of several hundred such people, yesterday saw a number of only about 50 or so, in stark contrast to the several hundred on the march itself.

Events of the last week and a half or so might seem to suggest that loyalists can tend to be a bit of a nasty lot, and of course the area's local fascists aren't exactly the sort of people you'd be chuffed to see your daughter bring home for dinner, so, according to our sources, a number of activists from both Manchester and Liverpool opted to move around the city separately from the main march with a view to keeping an eye out for any potential wrong-doers.

An early encounter with a small group of fascists showed the extent to which the 'nationalists' weren't willing to put their money where there mouth is when faced with the prospect of an hostile encounter with the opposition. This seemed to set the tone for a day of disappointment for the far right, whose pitiful numbers and primitive tactics saw them caught short on several occasions. Anti-fascist activists were able to remain mobile both on foot and by vehicle but in reality had very little to do, when faced with such a disorganised and small group of fascists who made at best half-hearted attempts to show their disapproval at the march.

A solid chunk of the fascists were arrested for a number of offences, ranging form possession of class A drugs to racially motivated insults and breach of the peace, but the march itself proceeded without problem. There was a massive police operation around the demonstration that seemed to be incredible over-kill given the level of threat. The police have however fallen firmly into the bad books of the local far-right, with the 'Scouse Nationalists' (see NF, NWI, NWFF, EDL etc) issuing a fatwa calling for the police to be targeted.

Given that the only previous 'physical exploits' of the far right in Liverpool include, amongst other incidents, targetting pacifists (and clueless) Occupy protestors several years ago, ganging up to assault lone musicians and turning up to meetings mob handed before leaving when requested to by those on the doors, we don't think Merseyside Police will be going to the mattresses just yet. We feel that perhaps the fash are trying to run before they've learn to walk, as their fighting prowess is not currently the subject of fireside tales across the land. Regardless, the day represented another sad showing from a ramshackle shit mob with serious delusions of grandeur. Well done to everyone on our side who was out on the day.