Local community have been trying to protect the only green space in Farnborough town centre, a green space, with trees crossed by public footpath. 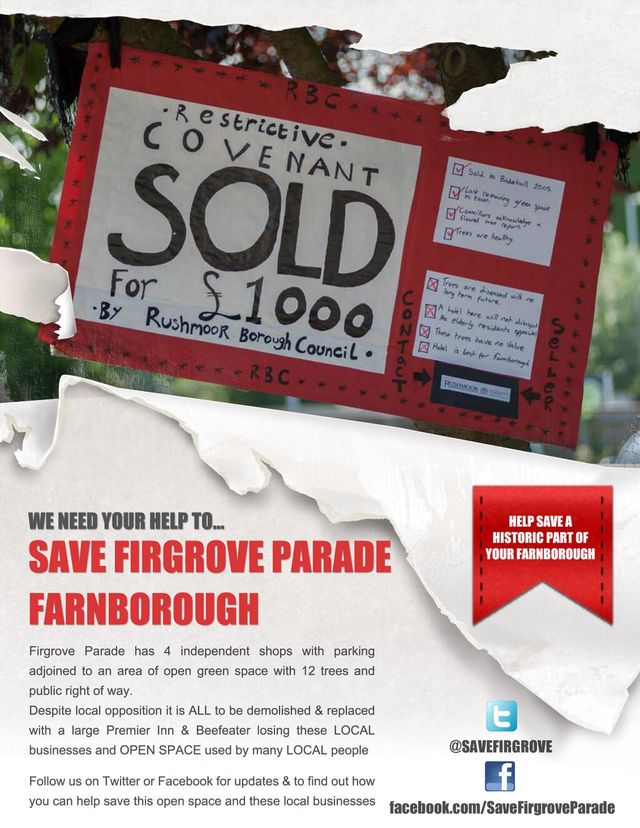 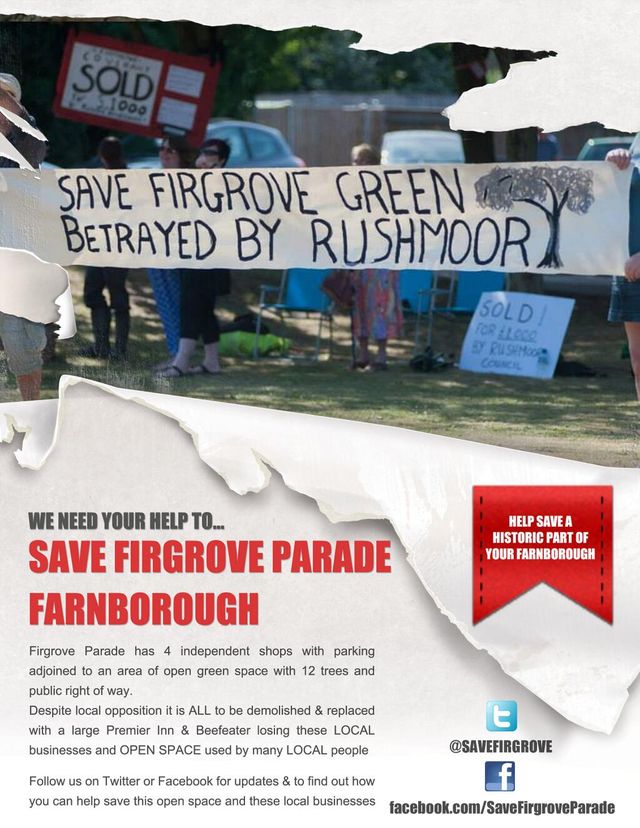 The only green space in Farnborough town centre, at Firgrove Parade on Victoria Road, is earmarked for destruction for an unwanted 80-bedroom Premier Inn hotel.

Around ten days ago, tree surgeons tried to cut down the trees. Local people turned up and stopped them.

An attempt is expected again at 7am this morning, but this time fencing is going up around the entire boundary of Firgrove Green. Security and Police will be present mob handed. Trees are being cut down no matter what.

They are keen to cut down the trees as the trees are evidence of the blatant lies told at planning meeting.

Once the fencing is up, we will be trespassing if we want to get on the green and have been informed we will be arrested.

The greedy developer Bride Hall has gone to a great deal of trouble to pressure the police and the council to make sure this happens... they will not tolerate any of us getting in the way of destroying that green and this morning it is due to happen.

I would urge you to attend, if only to document proceedings and to shout and hold up our banners.. we want the press down there too if possible. Please be careful, this could get extremely out of hand as they will not fuck about.

The large numbers of police and security expected to turn up mob handed, means people could get badly hurt.

There has already been warnings of arrest for aggravated trespass.

Aggravated trespass? Mothers with young children, grandmothers and great-grandmothers, officers workers having their lunch, people meeting up for a chat, picnics ....

Once planning consent is issued, it will be legally challenged. Thus work can still not take place.

Public footpaths run across the land. These cannot be obstructed. To do so is unlawful.

Village Green status has been applied for. The developer is trying to trash the land before the application has been processed.

Why therefore, are they so keen to destroy the trees? It can only be to destroy important evidence of Misconduct in Public Office.

Activists save trees at Firgrove Parade