Occupy Firgrove: Destruction of the trees

The planners lied, said the trees were in poor state of health. The trees had to go, as they showed the planners lied. Green space, the only green space in town, earmarked for destruction for an 80-bedroom Premier Inn hotel. 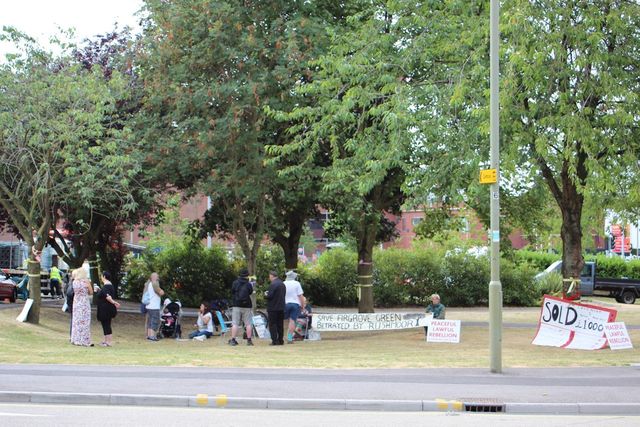 trees in the morning 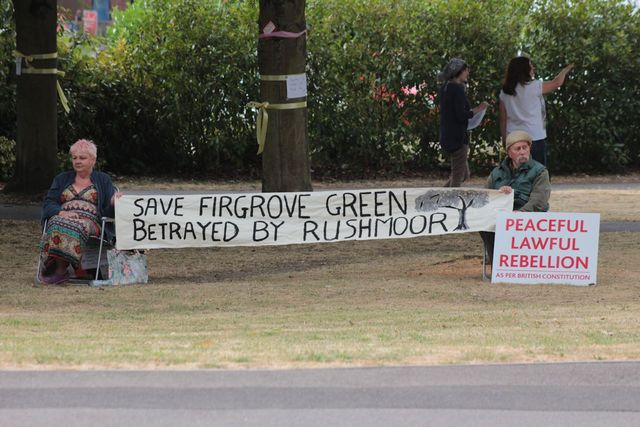 Save Firgrove Green Betrayed by Rushmoor 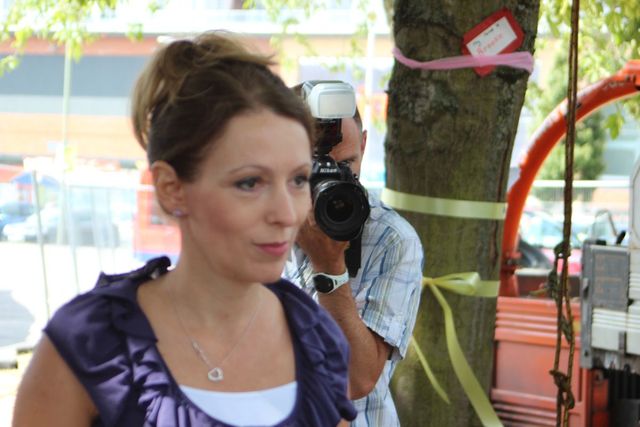 agent for Bride Hall ordering folk off the green 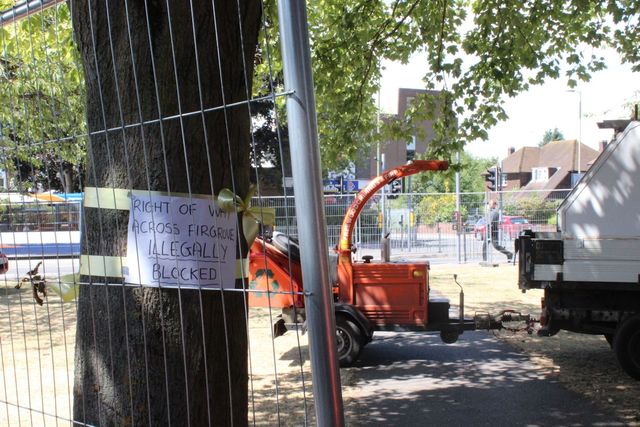 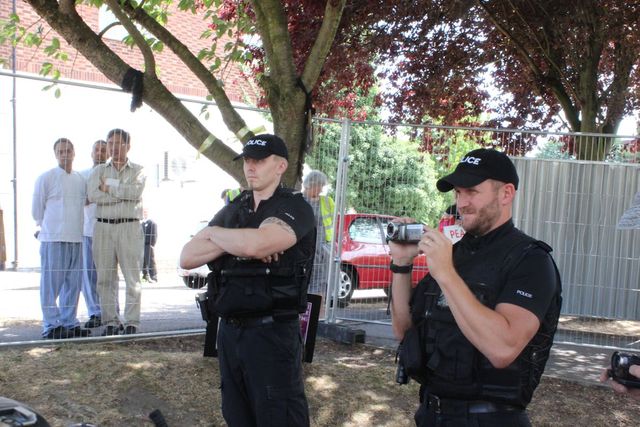 they film us we film them 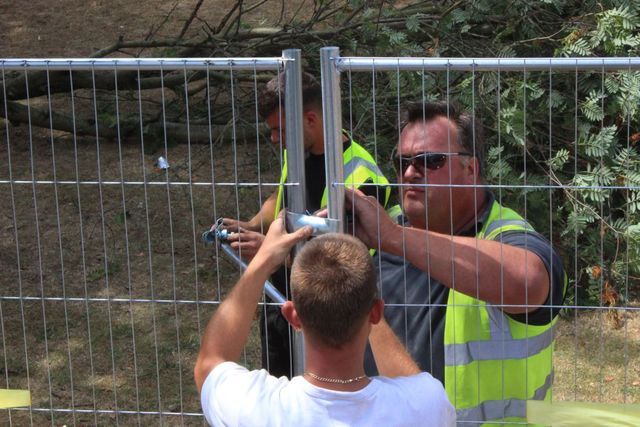 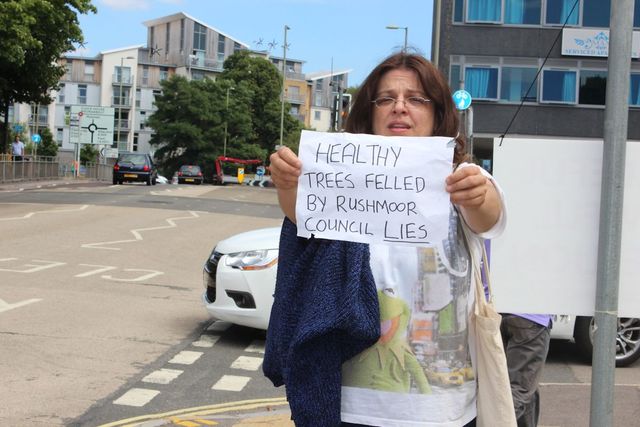 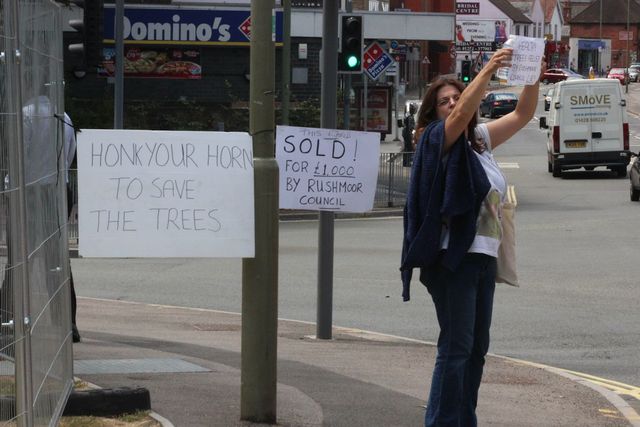 massive support by passers by 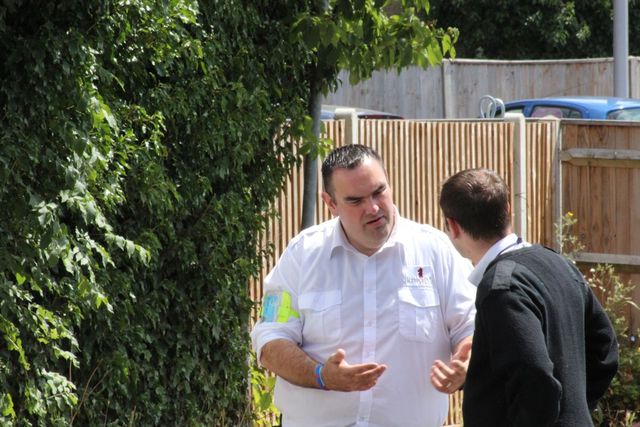 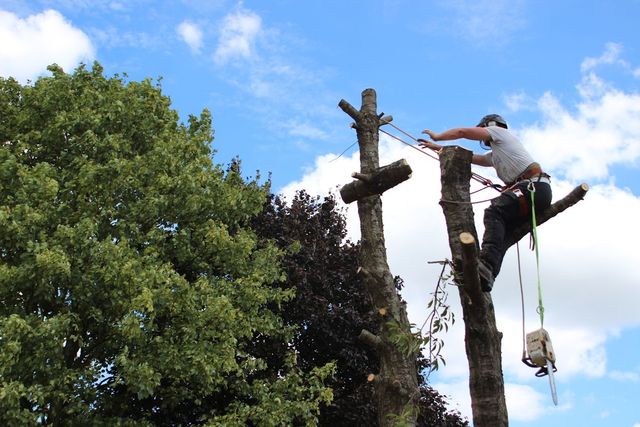 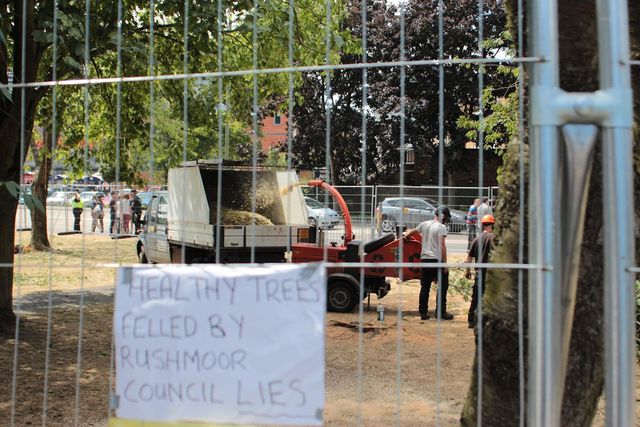 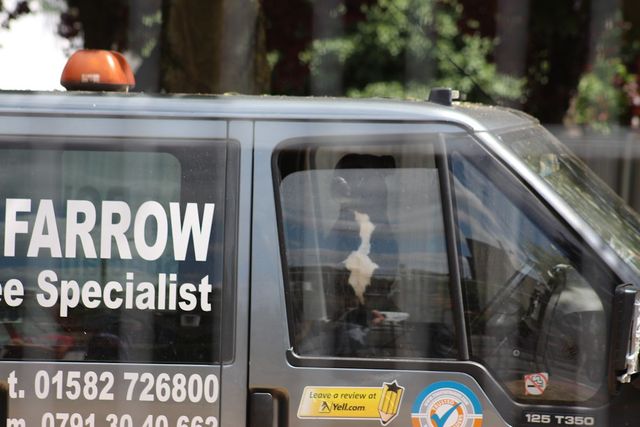 dog left all day in cab of truck 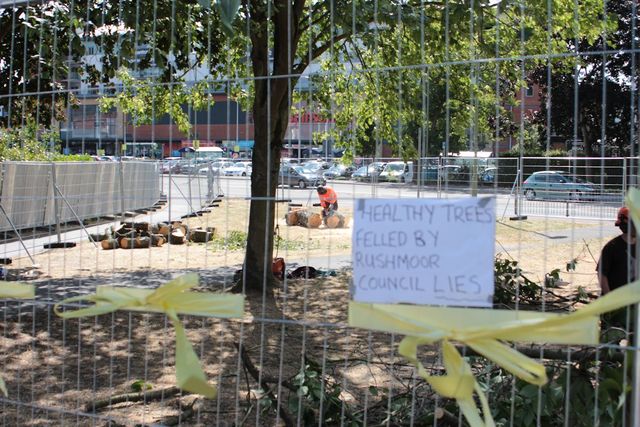 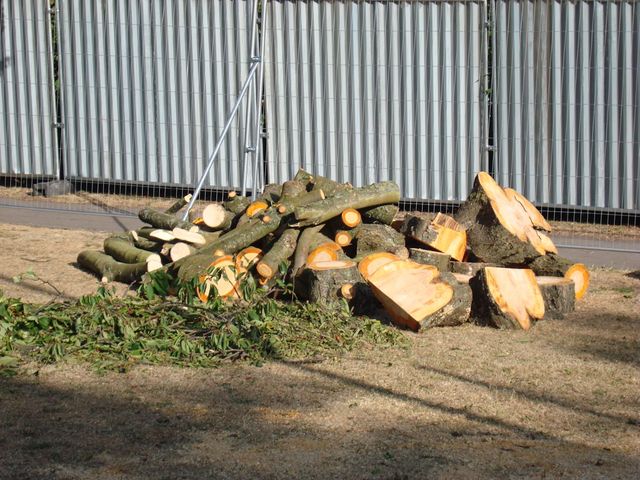 healthy trees reduced to a pile of logs 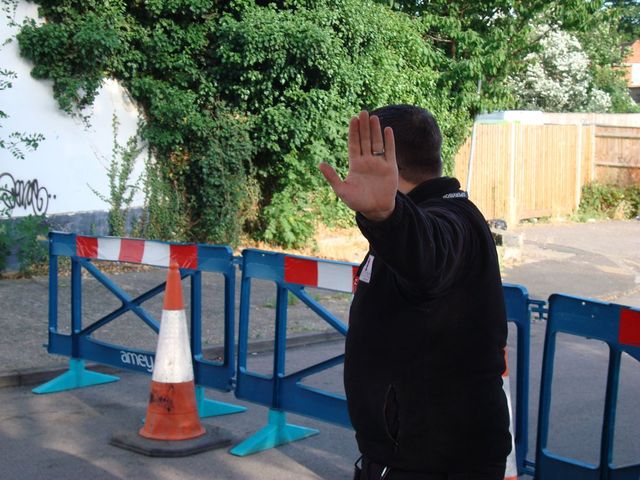 Green Frontage: The town has an abundance of green edges, including in those spaces adjacent to main roads. This characteristic is a positive asset for the town, and enhances environmental quality. — Supplementary Planning Guidance for Farnborough town centre

Last month a planning application was passed to demolish three local shops, and an Indian restaurant at Firgrove Parade in Farnborough. This would also render homeless the people living in the flats above, flats that are in very poor state of repair.

The planning committee were told it was not of their concern they can go somewhere else, another town maybe.

Adjacent to the site a grassy green with trees, crossed by public footpaths. Used by local people for decades. It has proven popular in the last few weeks, as people seek out the shade of the trees.

Firgrove Green is the only green space in the town centre. It is earmarked for destruction for a 80-bedroom Premier Inn hotel.

This is what in Farnborough is jokingly called town centre regeneration, destroy green space, cut down trees, destroy local businesses. George Orwell would be proud of this use of newspeak.

At the planning meeting, the committee was whipped into line by the head of planning. The committee was told the trees were in a poor state of health. And just in case they had not got the message, they were told there were no planning grounds to reject the application, and if they did, it would be lost at appeal.

Surprise, surprise, the trees are in a healthy state, nothing like they were described to the planning committee.

Since then, the local community has been on high alert. They suspected the greedy developer Bride Hall would not give up. They were proven correct.

On Sunday, Knight Security started trying to remove cars under the false threat people would be fined. This could only mean one thing, Bride Hall wanted to bring in a lorry to fence the site, possibly even bring in a bulldozer or a digger to trash the site.

Before 7pm Wednesday morning, Knight Security turned up mob handed. But they were too late, local people were already on the green. A large number of police turned up, including riot police. The police were filming protesters, protesters filming the police.

The tree surgeons turned up. They drove a truck at high speed onto the site, putting protesters at serious risk of injury, and stopped very close to protesters. Fencers turned up and started to fence in the protesters. Passers by, so angry at what they saw happening, joined the protesters on the site.

A woman claiming to be an agent acting for the developer, ordered everyone off site. She refused to identify who she was. Inspector Justin Browne of Hampshire Police, then asked everyone to leave. If they refused, he would have arrested and charged for aggravated trespass. At this point, everyone decided to leave, as nothing was going to be served by being arrested. Everyone though still remained but outside the fenced off area. A group of kids outside the fenced off area, on a public right of way, were threatened with arrest. A report in the Farnborough News that protesters were evicted from the site not true.

A public right of way was unlawfully blocked. The police were asked to deal with this. They refused.

Why start now? It can only be to destroy the evidence of healthy trees on the site.

Keith Holland, head of planning at the Rotten Borough of Rushmoor, was asked to serve enforcement action, as no planning consent had been issued to Bride Hall.

'Having visited the site earlier today, I saw no sign of any development commencing on site. Temporary fencing had been erected to secure the site for health and safety reasons, whilst contractors removed trees from the site. The trees are on private land and are not covered by a tree preservation order. The removal of the trees does not constitute the start of development and no planning breach has occurred, as far as I could see.'

He claims not part of the work. The plans show a 80-bedroom Premier Inn hotel on the green where the trees are growing. Or is Keith Holland agreeing with the protesters, that this work was to destroy the evidence that he blatantly lied to the committee?

He also states no TPOS on the trees. And why are there no TPOs? Because the local tree officer who seems incapable of differentiating a healthy tree from an unhealthy tree, refused to serve TPOs. And who does the tree officer work for? Why none other than the head of planning. And like his boss, he is a liar. He claimed in an e-mail, a copy of which was sent to his boss, he could not serve TPOs as planning consent had been issued. Planning consent has not been issued,

Thus we go round and round in circles.

'Your request for an emergency Tree Preservation Order is noted.  However, I have to inform you that the Council has no intention of making any such TPO.

The reason for this is that the proposed works to the trees have already been considered by the Council’s Development Control Committee as part of the wider planning application for the redevelopment of Firgove Parade.  As you know, the Committee resolved to grant consent to the proposed development, which includes the removal of the existing trees.

Therefore, having followed the proper process, the Council has already decided to permit the removal of the existing trees.  It would therefore be inappropriate and indeed preserve for the Council to now make a TPO which would effectively reverse its earlier decision regarding the trees and make it impossible to implement the planning permission.'

But this is what happens when you weave a web of lies, the web unravels and it is very difficult to keep your story straight.

The tree surgeons have cut all but two of the trees down.

They were expected to return in the morning, but no sign of them either yesterday or today.

Looking at the tree stumps and logs these were healthy trees that have been cut down.

One tree has been spared because it has a nesting pigeon. It is an offence under the Wildlife and Countryside Act, to disturb a nesting bird, its nest, its young or its eggs

Local people are extremely angry at what is happening. The one exception, a pathetic and rather unpleasant racist troll with an unhealthy interest in pictures of children, who if he keeps harassing people, under various fake IDs, will soon find himself served a Harassment Order. The only other, councillors and their officials who act in the interest of developers and Big Business, not the local community, local businesses.

The following night the Council met behind closed doors to discuss the Rushmoor Corruption Plan, oops sorry Rushmoor Corporate Plan, it states how much they value green space. There must be a hidden clause: Unless it is coveted by a developer, then our tree officer will condemn all healthy trees and we will rubber-stamp your planning application.

For the people of Farnborough, this was their Gezi Park moment, as in Istanbul, a green area in town, the only green area, being destroyed for development, by a corrupt council in bed with developers.

Local people are now calling for a boycott of Premier Inn and Costa, both owned by Whitbread.

No Trees No Future

Activists save trees at Firgrove Parade

Occupy Firgrove: Picnic on the green

Note: All photos apart from the last two, courtesy Glenn.