No Names, No Frack Drill

After a relatively quiet day on Sunday, today Monday, saw many vehicles arriving on site. Each delivery was met with heavy resistance. A heavily pregnant woman attempted to stop one of the trucks but was forced away as things got dodgy and dangerous. At the same time a man was arrested and brutally wrestled to the ground with a suspected broken arm.

For the rest of the afternoon more deliveries regularly turned up but only got through with police marching in front of each HGV and clashing with protesters attempting to stop them. A later delivery of office furniture saw a sit-down protest that resulted in a more significant delay and yet another arrest.

Perhaps as a sign of the struggle ahead the police have installed a mobile office on site and a casual conversation with one cop made it obvious that the police think they are there for the long haul. Some protesters thought it might pay to also set up a solicitor's office and branch of Infinity Foods alongside. 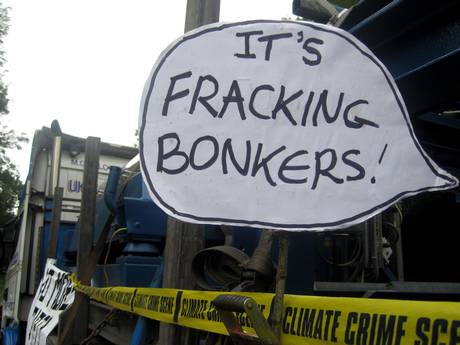 After Thursday's successful stand -off, Friday saw ninety police deployed to force the first of Cuadrilla's trucks through the human barricades in front of the site gates. As protestors linked arms the cops began to make the first arrests.

Altogether sixteen arrests were made – using a section of the Trade Union and Labour Relations Act 1992 , which was legislation first brought in to target flying pickets during industrial disputes. Two more were arrested on Saturday morning. Obviously Cuadrilla have now managed to start getting trucks in – but they're on a tight schedule with their drilling licence over by October. Allegedly they were supposed to get drilling today (Saturday) but that's been put back until Monday already. According to Anna Dark, a community representative “They need to get forty days of drilling done before the end of their licence, they've lost a day already – we can stop this!”

Cuadrilla's planning permission only allows for vehicle movements at certain times – they were supposed to stop at 1 pm today. Sussex cops started off claiming that there was an extension but backed down in the face of irate villagers demands to see the paperwork.

Undeterred by the show of repression a large protest camp has sprung up along the verge and with 90% of Balcombe village residents saying they're in favour of direct action this one could run and run.

SchNEWS has heard that there will be no truck movements tomorrow but there will be transport heading from Brighton up to the drilling site – leaving at 9 a.m from outside RBS on the Old Steine

For continuous updates and how to get involved http://frack-off.org.uk