Soon after the formation of the EDL, one reason people started to realise EDL claims they only formed to oppose extremist Islam were a pack of lies, was because it turned out the EDL website had been registered by BNP "Gold" member Chris Renton. As of the 1st Aug 2013, the EDL's main Facebook page refers to a question asked by the EDL Admin as "my blunt question". The screen-capture of that conversation shows that the identity referred to by the EDL Admin as the person who asked "MY" question, is John Sheridan, aka Chris Renton, ie - the EDL's main Admin (still) is BNP activist Chris Renton! 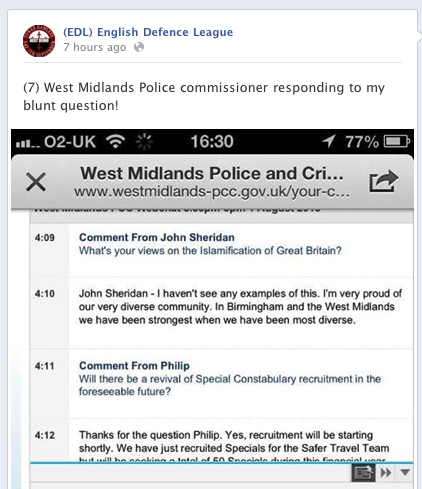 Soon after the formation of the English Defence League, one of the reasons people started to realise EDL claims they only formed to oppose extremist Islam were a pack of lies, was because it turned out the EDL website had at that time been set-up by and registered to Chris Renton, who was revealed by a leaked British National Party members list to be a BNP "Gold" member (in other words to be a dedicated Fascist) from Weston Super Mare. Later, Chris Renton became well-known for using the pseudonym John Sheridan.

Although nowadays the EDL is associated with the leadership of ex-BNP member Stephen Yaxley-Lennon (aka Tommy Robinson), the EDL was initially founded by Yaxley-Lennon's former school-friend, a former drug-dealer called Paul Ray. After some time as EDL leader, Paul Ray stated that (although he did not oppose the BNP as such) he was pushed-out of the EDL and replaced by Tommy Robinson, because he (Paul Ray) objected to Chris Renton inviting members of the Nazi group Combat 18 to attend EDL demos (and Paul Ray later admitted his ideas had influenced child-murderer Anders Breivik).

After the bad publicity that Chris Renton's involvement in the EDL leadership team had caused however, Chris Renton (aka John Sheridan) kept a low profile in EDL circles for a while, helping to set-up a more openly Fascist EDL splinter group called the English Volunteer Force, or EVF (who based their name on the murderous sectarian terror cell the Ulster Volunteer Force, or UVF, whose flag was flown by the BNP at the BNP's recent fuck-up in central London).

On the 1st August 2013 however, the EDL's main public portal - the official EDL Facebook page - posted an item which refers to a question asked by the EDL Admin as "my blunt question" (emphasis on the word "my"), addressed to West Midlands Police. The screen-capture of that (online) conversation, which was posted by the EDL on their Facebook page, shows that the identity referred to by the EDL Admin as the person who asked (quote) "MY" question, is none other than John Sheridan - the same slightly-famous British Nazi Party wanker who set-up the first EDL website in the beginning. Nothing's changed...

EDL Exposed as a BNP Front -

The "Lionheart" (sic) blog of original EDL founder Paul Ray stating that (quote) "Chris Renton under the alias of John Sheridan has risen to the position of second in command of the EDL, and now since the arrest of the alias Tommy Robinson, is the de facto commander of the EDL" (scroll down) -