Berlin: Raids and Demonstrations - "We are not scared".

On the morning of Wednesday the 14th of August 2013 around 400 police raided 7 buildings in Berlin on the pretext of 'evidence-gathering'. That evening an unlicensed demonstration was held, attended by around 150 demonstrators and a large police presence. A further demonstration has been called for tomorrow at 5pm, in the Friedrichshain area, against the raids and state repression. 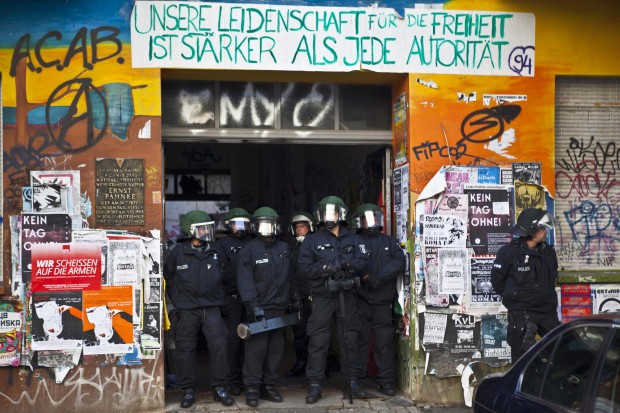 The quote above reads: "Our passion for freedom is stronger than any authority"

On the 14th of August 2013 at about 6am, 300 police (political police, riot police, civil police) along with dogs and vehicles conducted a dawn raid of the squat/house project Rigaer94 in the Friedrichshain area of Berlin. The official pretext for the raid was to gather evidence concerning ongoing investigations into attacks on Jobcenters in May of this year and and a soli-demonstration in June where police were attacked.

The police held the inhabitants of the house hostage for 6 hours in kitchens and bedrooms. They removed items from peoples' bedrooms, communal rooms and the attic and then left. The nearby housing project Liebig34 made noise in solidarity with those being raided and were themselves subject to an attempted raid by the police, where one person was arrested.

As this was going on, another 100 police raided 6 other apartments in the neighbouring districts of Berlin with the same supposed intention of evidence gathering.

A statement was made by the members of Rigaer94 and an unlicensed* demonstration called for 8pm that evening. It was held in Kreuzberg and attended by around 150 demonstrators. There was a heavy police presence from the start and after about 100 metres of the march they moved in to try to break it up. The demonstrators broke through the attempted containment. One person was detained but later released onto the street after having a banner seized off of them. Here are photos. *[In Germany it is illegal to hold a demonstration without informing the police beforehand.]

A further demonstration has been called for tomorrow at 5pm starting at Bersarinplatz in Friedrichshain, this in on the same street as the some of projects affected. Tell your friends.