Cardiff: Solidarity with squats under attack in Greece and raids in Berlin

On August 5th cops in Greece continued their campaign of repression against squats by raiding three squatted spaces in Patras: Parartima, Maragopouleio and the Self-managed Hangout inside the Technological Educational Institute (TEI). 16 comrades were detained in total; 5 squatters and 11 supporters. 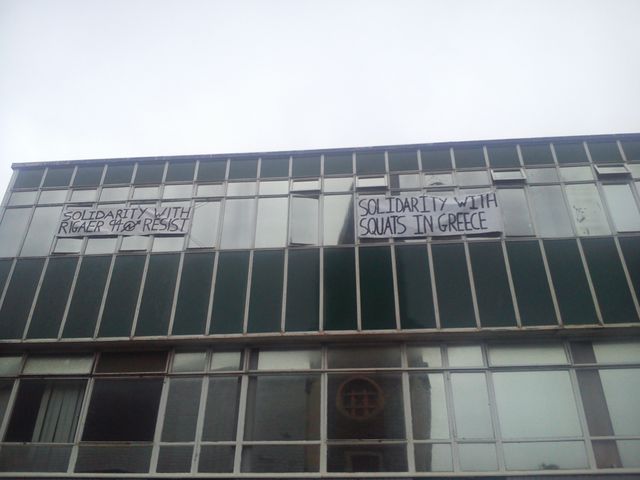 While those showing solidarity were later released, the 5 occupants faced charges in court on the 13th. Therefore the next day we painted a banner to express our solidarity with squatters facing charges and evicted from their homes.

Additionally today we hung another banner to show solidarity with the squat Rigaer 94 and all those arrested during raids in Berlin on the 14th. The raids were supposedly related to arson attacks of various job centres and a Molotov attack against police, in solidarity with the revolts in Turkey after the eviction of Gezi Park in Istanbul.

The banners are now hanging from Canton police station that we appropriated for our own use in Cardiff. We squat here to show that not everyone is afraid, that some of us are bored of living in fear, and instead desire to fight back.

Solidarity with squats under attack in Greece!

Solidarity with everyone evicted from their homes!