The jury is now out in the Helicopter Gunship Ploughshares trial in Rockhampton, 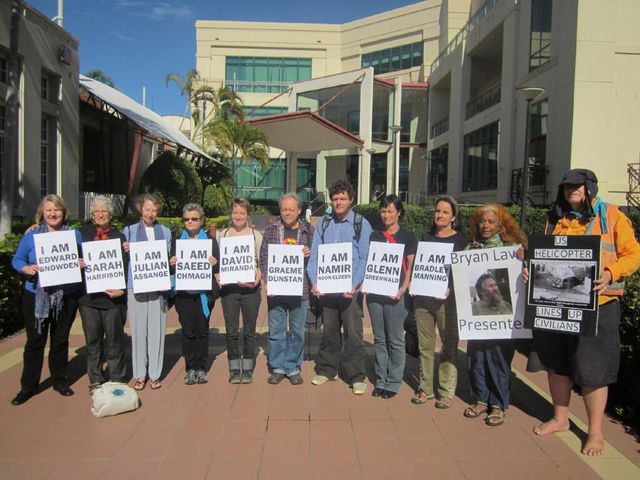 The dead are evoked, Graeme Dunstan's ploughshares partner Bryan Law R.I.P. is remembered & all the victims of helicopter gunships from collateral murder

http://collateralmurder.com/ of the innocents on the streets of Baghdad to Vietnam to Afghanistan to El Salvador to Guatemala to East Timor to Sri Lanka, the list of locations is endless.

This weapon system, by its very nature, is an indiscriminate killing machine. Dress it up in Hollywood,advertising spin & media hype, - call it Tiger, Black Hawk, Cobra., Call it Apache, & name it after empire's historic victims, it will never take the stench of massacre away.It has cut down working people & children from the paddy fields of Vietnam to downtown Mogadishu - name it whatever it is what it is .It needs to be truly named for what it is and it needs to be disarmed.

Thank you Bryan R.I.P. Thank you Graeme.
Thank you Bradley Manning facing sentence today.
For swords into ploughshares, the hammer has to fall.


Court Report from August 20th. where Collateral Murder footage was screened to the jury