A statement written by North Amerikkkan imprisoned hacker Jeremy Hammond for the Barrett Brown/Jeremy Hammond fundraiser held in NYC on 19/08/2013... 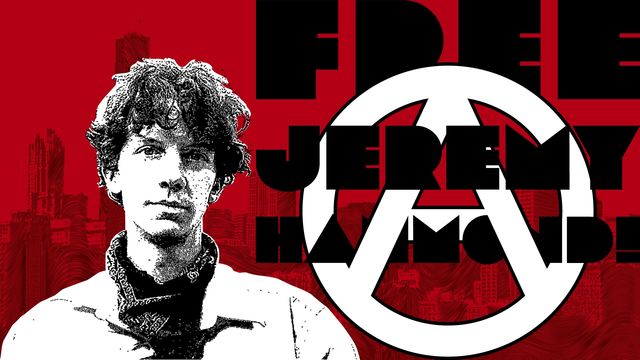 
I hope this evening finds you all in the best of health and highest of spirit. Thanks for coming out to show support for me and Barrett Brown.


I want to shout out to all my brothers and sisters locked down, here at New York Metropolitan Correctional Center, at Brooklyn MDC, at Rikers Island, in the Tombs, at Cook County Jail in Chicago, and to all those on hunger strikes in California prisons and Guantanamo Bay.


Also thanks to the folks who put this event together, who have attended my court dates, who have written letters and sent books, and who went to the noise demonstrations outside the jail here. Your acts of solidarity bring us all great encouragement, inspiration, and strength during these harsh times.


Comrades, we are up against a racist capitalist power structure that wages wars, destroys the environment and spies on our every move! They lock up millions of people in cages for “crimes” that corrupt governments and multi-national corporations also commit on an everyday basis and on a greater magnitude, yet we are the criminals.


They lock us up for guns and drugs when defense contractors and pharmaceutical companies are the top traffickers.They call us thieves when it’s Wall Street 1%ers who rob us blind, exploit our labor, evict us out of our homes, and get billion dollar bailouts.


They condemn hackers and leakers when the NSA, CIA, and FBI illegally spy on everybody, and wage cyber espionage through viruses and hacking for foreign government systems.


They put signs everywhere that say “If you see something, say something” as if their extensive surveillance camera systems aren’t enough, they also want us to become additional eyes and ears for the police against our own neighbors.


But if you point out suspicious activities of our own government, if you leak information that should be free and public anyway, then they will follow you to the ends of the Earth to put you in prison.


Even if you simply report on these leaks, they will discredit you, subpoena you for your sources, or just put you in prison on a bunch of trumped up charges like they did Barrett Brown.


They repress us, infiltrate us, entrap us, harass our families and friends, and call us criminals, terrorists, and traitors, and break their own laws to try to stop us because we work to expose the truth.


They are scared that if people know the truth, the day will come when they will have to answer for their own crimes.But can we trust whatever “independent review panel” they put together to investigate the NSA? After all the lies and egregious illegality, do you think any of them will be charged or do time? Will we ever be satisfied with any reforms they promise?


The answer is obviously no.


Justice can never be found in their courtrooms.


Yes, we need to eliminate mandatory minimum sentences, but Attorney General Eric Holder doesn’t give a damn about prison overcrowding.


The Obama administration is not interested in any such debate about “the balance of privacy and security” because they will keep spying on everyone, regardless of public opinion, until we stop them.


The time for talk is over, it’s time for collective refusal, civil disobedience, and direct action. We must support all those who risked their freedom and lives to expose and confront the power structure, and continue the struggle until we stop these wars and the prison walls come crumbling down and we can all be together again free and equal!


Yours for the revolution, Jeremy Hammond.