Around a dozen people showed up in Queens Square, Wrexham this morning at short notice in visible opposition to the threat of western military action in Syria. The government may have lost the Commons vote last night but there's every chance it won't be able to resist getting involved in some way if the US goes ahead with an attack.

Among those protesting today were two enthusiastic children who made sure the placards were displayed to their best advantage throughout the morning and a Syrian friend who has alreadly lost five cousins and numerous acquaintances in the conflict. 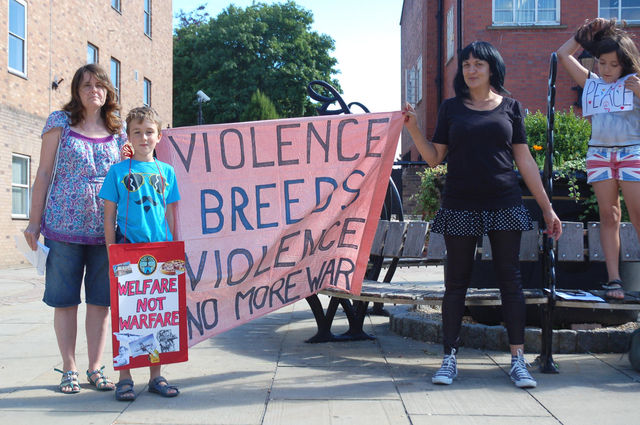 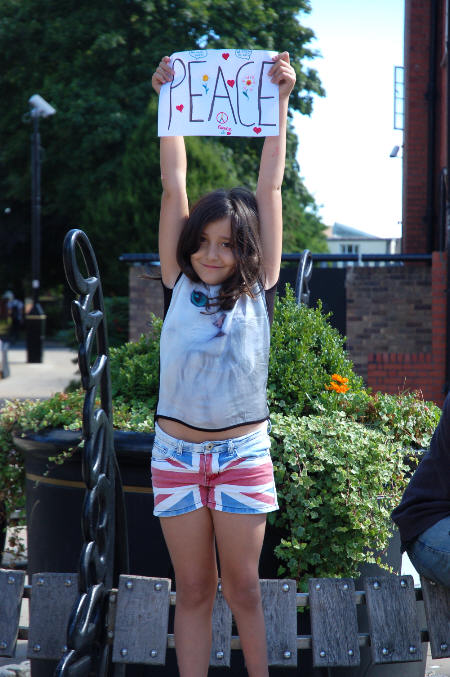 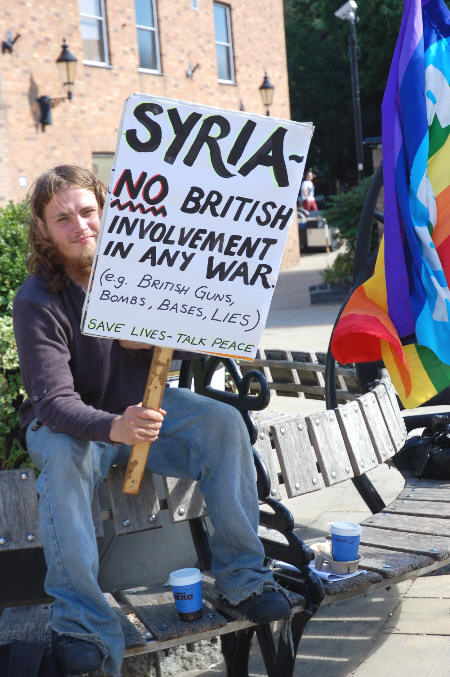 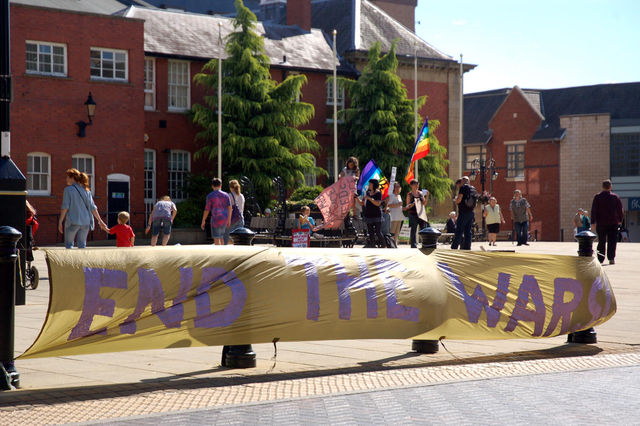 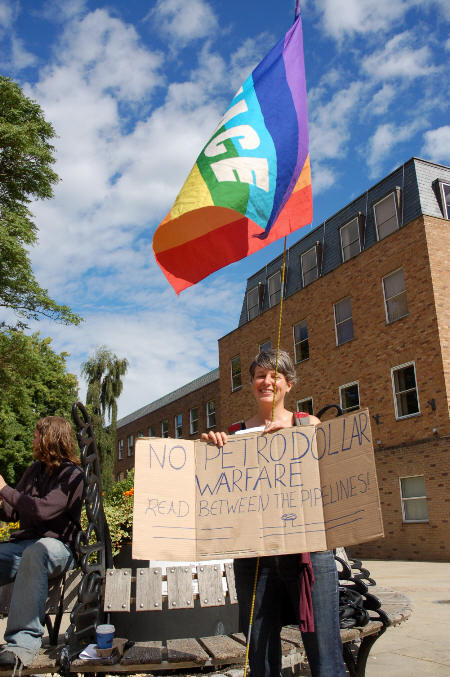 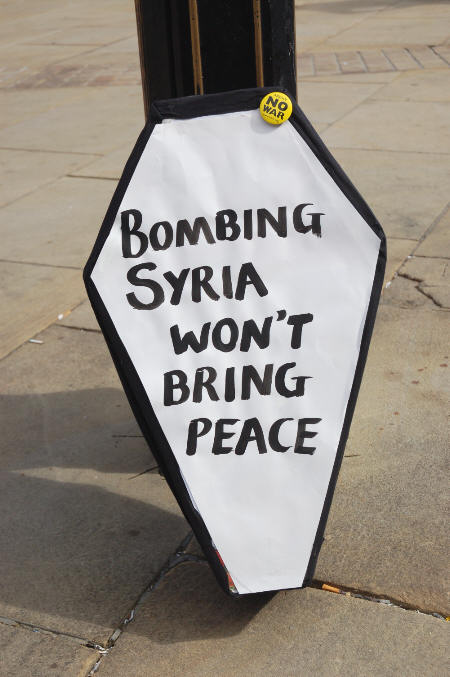 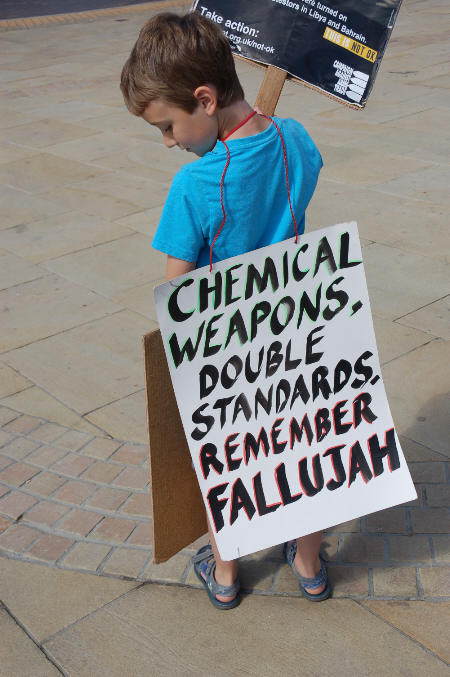 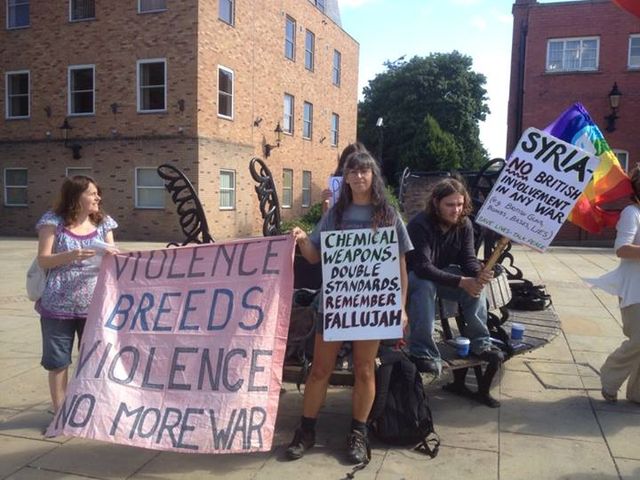 No confidence in the anti-war vote

An article in the Guardian quoted Doctor Andrew Mumford, lecturer in politics and international relations at the University of Nottingham:

"Even if Britain doesn't participate in any further military action against Syria that the US might lead, you can be absolutely guaranteed that the British will be giving as much support and help in an indirect capacity as possible."

He said that could include use of British bases, or through passing on intelligence, adding: "That could be quite significant if the Americans are wondering which strategic targets of Assad's to hit."

Miliband, meanwhile, said he wasn't opposed to military intervention in principle; this hardly inspires confidence that Labour will maintain opposition to war on Syria.

I have little faith in the healing power of parliamentary 'democracy' but let it not be said that I failed to pursue this avenue. Yesterday morning I wrote to my MP, Susan Elan Jones, to tell her what I thought.

"I am writing to urge you to oppose British military intervention in Syria. Hopefully Labour has by now learned the lessons of its murderous intervention (on a lie) in Iraq.

"If those who use chemical weapons are to be held responsible, then let's start with the disaster that's Fallujah, where there's no uncertainty about the perpetrators of that particular atrocity.

"Besides, military intervention won't save lives. There will just be more 'collateral damage' which in plain language is men, women and children - innocent civilians. We know. We've seen enough of these sort of western military misadventures recently.

I got a couple of standard messages in reply, one thanking me for my "thoughtful email" and telling me that Elan Jones shares my serious concerns, then after the vote another to say how pleased she was that "we defeated David Cameron's resolution last night and that our country will not be entering a war situation in Syria." Let's see if she can sustain that position. Neighbouring MP for Wrexham Ian Lucas got himself in a real mess over the Iraq war and the elusive second UN resolution back in 2003.

All wars are started and sustained with lies. We have to hope that what's different this time is that we have the benefit of evidence from behind the scenes of the war-making states, for example the vast volume of documentation released by Chelsea (Bradley) Manning and others and disseminated by Julian Assange's WikiLeaks, for which public spirited action both Manning and Assange continue to be persecuted. More people won't be fooled this time round. Let's hope that we have the strength collectively to say NO to this latest threat to our fellow human beings and to mean it.