With overcast but warm weather, tonight’s Critical Mass ride in London attracted around 600 at the start, with more joining along the route, including a samba band on rickshaws. 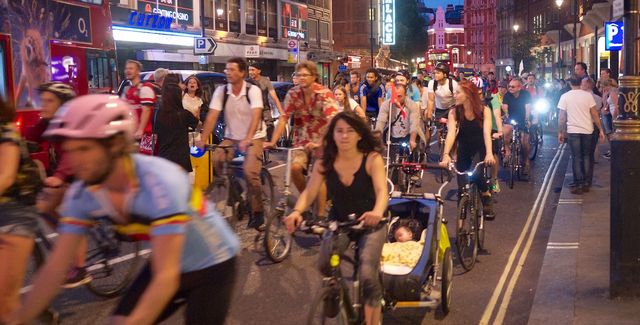 The ride, held the last Friday of every month, meets under Waterloo Bridge on the South Bank outside the BFI. From around 6pm, cyclists, skaters, and skateboarders begin congregating, and the ride usually sets off around 7pm on a mystery tour of London, led by whoever is at the front, and who can get a ‘critical mass’ of bikes to follow.

Shortly after 7pm tonight, around 600 cyclists set off across Waterloo Bridge, through the underpass, and north towards Euston Road.

Most motorists comply with the ‘corkers’ – cyclists who volunteer to block side roads so that the mass can stay together as a unit for the safety and pleasure of all. With such a large mass, the wait can be several minutes, and although motorists would normally sit in a traffic jam for that long without turning into psychopaths, a few seem to get enraged that cyclists are the cause, and act bizarrely.

Unfortunately we met one of these driving a taxi at the corner of Russell Square, and as he purposely drove his vehicle into the bicycle in his path, a young woman screamed as her bike got stuck under his front grill. Eventually he was persuaded to reverse slightly to free the very upset cyclist, but he still maintained she, not he, was in the wrong!

Onwards along Euston Road and then dropping down into Soho, by which time the mass had been joined by the ‘Rhythms of the City’ samba band, aboard rickshaws, bringing delight and amazement to the streets.

On this occasion, I left the mass a little later heading down Shaftesbury Avenue to Piccadilly Circus and onwards, still hundreds strong at 9pm.

Aside from the regular end of month mass, leaflets were handed out about the following events:

Monday evening 2nd September a “Space for Cycles” safety protest near Parliament, meeting in Jubilee Gardens at 6pm and set to attract thousands.

Sunday 8th September ‘Bikes Not Bombs’ Disarm DSEI ride from Bank Junction at 10am to the Excel Centre where the world’s largest arms fair begins, and Thursday 12th Sept – a ride to the Arms Dealers’ Dinner

The next Critical Mass ride will be Friday 27th September.
More pics from tonight at