To celebrate the recent release of Asia's Unknown Uprisings Volume 2 (PM Press) George Katsiaficas and Geronimo will be speaking at several events in the UK (including the Anarchist Bookfair in London). They will discuss the Asian Wave from 1986-1992 which overthrew 8 dictatorships in 6 years, the 1980s German autonomous scene and discuss what links can be made to current uprisings, rebellions and revolutions. 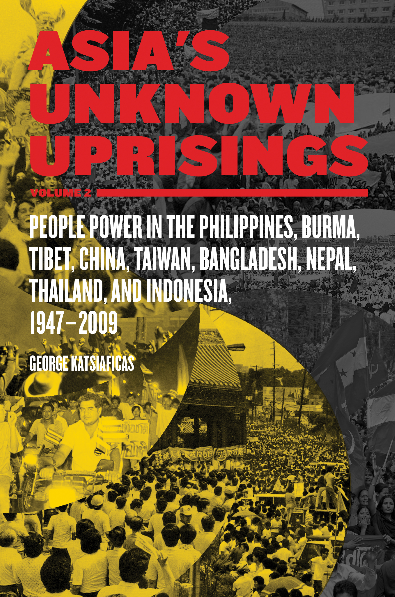 To celebrate the recent release of Asia's Unknown Uprisings Volume 2 (PM Press) George Katsiaficas and Geronimo will be speaking at several events in the UK (including the Anarchist Bookfair in London). They will discuss the Asian Wave from 1986-1992 which overthrew 8 dictatorships in 6 years, the 1980s German autonomous scene and discuss what links can be made to current uprisings, rebellions and revolutions.

About Asia's Unknown Uprising - Vol 2
Ten years in the making, this magisterial work provides a unique perspective on uprisings in nine Asian nations in the past five decades. While the 2011 Arab Spring is well known, the wave of uprisings that swept Asia in the 1980s remain hardly visible. Through a critique of Samuel Huntington’s notion of a “Third Wave” of democratization, the author relates Asian uprisings to predecessors in 1968 and shows their subsequent influence on uprisings in Eastern Europe at the end of the 1980s.

“This book about people's power movements in Asia over the last sixty years makes the case, convincingly, that they should be seen as part of the worldwide new left. Reading it will broaden the perspective of activists and analysts in North America and Europe, a very important task.”
--Immanuel Wallerstein, Yale University

George Katsiaficas is author or editor of eleven books, including ones on the global uprising of 1968 and European and Asian social movements. A Fulbright Fellow and student of Herbert Marcuse, he is the author of The Imagination of the New Left: A Global Analysis of 1968. His book, The Subversion of Politics: European Autonomous Social Movements and the Decolonization of Everyday Life, was co-winner of the APSA's 1998 Michael Harrington book award. Among his edited volumes are Liberation, Imagination and the Black Panther Party (with Kathleen Cleaver) and Vietnam Documents: American and Vietnamese Views of the War. A longtime activist for peace and justice, he is International Coordinator of the May 18 Institute at Chonnam National University in Gwangju, South Korea, and teaches at Wentworth Institute of Technology in Boston.

Geronimo is the author of Fire and Flames, the first comprehensive study of the German autonomous movement ever published. The author, writing under a pseudonym, has been an autonomous activist since the movement burst onto the scene in 1980-81. Tactics of the "Autonome" were militant, including the construction of barricades or throwing everything at the police. Because of their outfit (heavy black clothing, ski masks, helmets), the Autonome were dubbed the “Black Bloc” by the German media, and their tactics have been successfully adopted and employed at anti-capitalist protests worldwide.

There will also be a gig after the event, starting at 21.30 with 1981 (Finland) and one other band TBC, £5 requested donation. 1981 = anarcho punk of the more melodic variety.. think Political Asylum, The Mob, early Chumbawamba etc

Accessibility guidelines for the club:

----
Our previous bookshop talk is 'The Anarchist Revelation' on September 25