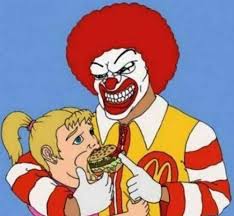 Have you ever wondered what’s in McDonald’s Chicken McNuggets? You might be surprised to learn that they contain
a whopping 25 ingredients…and that’s assuming you don’t use any dipping sauces! According to the ingredients
list from McDonald’s own website, here is what they contain:

-Chicken breast—
-Water—Not much to say about that one.
-Modified corn starch—Corn starch is almost always genetically-modified. But that’s not what the “modified”
in “modified corn starch” refers to. It usually refers to chemically- or enzymatically-treated corn starch,
which can leave chemical residues behind. Additionally, it often contains monosodium glutamate (MSG),
which I’ll discuss further in a minute.
-Salt—That’s fairly straightforward.
-”Seasoning”—Seasoning contains yeast extract (that almost always
contains the neurotoxin MSG which has been linked to a whole host of diseases.
Read the excellent book Excitotoxins: The Taste that Kills by Russell
L. Blaylock, a neurosurgeon and MSG researcher, to learn more about the health problems linked to MSG),
more salt, wheat starch (a processed food that contains just the starchy part of the wheat,
“natural flavor” (more likelihood of toxic MSG), safflower oil, dextrose, citric acid, and rosemary.
-Safflower oil—Believed to be a healthier cooking oil, most safflower is unfortunately heated to high
temperatures long before it is ever used for cooking, causing it to be chemically-altered from the heat,
and a source of inflammation in the body when that is the case.
-Dextrose—a type of sugar.
-Citric acid—used as a preservative.
-”Natural extractives of rosemary”—this could be any number of ingredients found within rosemary, the health of
which is determined largely by the process of extraction and whether any chemicals are used in this process.
-Breaded with: water, wheat flower, yellow corn flower, modified corn starch, spices, salt, baking powder,
sodium aluminum phosphate, dextrose, wheat starch, corn starch, modified hydrogenated soybean oil
Yellow corn flower and modified corn starch—both of these ingredients are derived from corn which is now
almost 100% genetically-modified (GM). GM foods have been linked to sterility, allergies, infant mortality,
organ defects, and childhood diseases. Check out my article Top 20 Frankenfoods to Avoid for more information.
-”Spices”—This could be any number of ingredients. It often used by the food industry to disguise MSG.

Keep reading. The worst is yet to come…

-Modified hydrogenated soybean oil—This oil has been chemically-altered to be more “stable”
but has been linked to heart disease.

-Canola, corn and soybean oils are derived from three of the most widely genetically-modified crops
on the planet. These oils are typically heated to high temperatures during extraction and manufacturing,
causing the oils to be inflammatory and harmful to the body.

-TBHQ is a petroleum-based, butane-like (yes, that’s lighter fluid!) ingredient used as a preservative.
It has been linked to asthma, skin conditions, hormone disruption, and in long-term animal studies to
cancer and damage to DNA. It is disturbing to me that this ingredient is allowed in food.

-Dimethylpolysiloxane– used as an anti-foaming agent, this industrial chemical is typically used in
caulking and sealants and comes with a list of safety concerns. It’s best reserved for industrial sealants than for food.

McDonald’s can keep its industrial chemicals, toxic oils, and genetically-modified ingredients.
I think I’ll pass on the nuggets. Be sure to check out my article Shocking Ingredients in McDonald’s French Fries.

The transparency campaign initiated by McDonald's last year was intended at marketing a
more health conscious image of McDonald's Corp.–and at using social media more effectively,
but instead of talking about their love for the brand, the hashtag became a forum for
people to talk about how disgusting they believe the food is. The ingredients in their
french fries went viral. Instead of the basic two ingredients-potatoes and oil,
consumers found out McDonald's french fries contain 17 ingredients.

The campaign isn’t brand new. Launched by McDonalds last June using a YouTube video to answer
a consumer’s question about why their food looks so drastically different in commercials than
in the restaurant, the “Our Food, Your Questions” premise opened McDonalds’ kitchen doors,
lending the brand to a supposed more honest and transparent feel. By prompting consumers
to ask their questions on Facebook or Twitter, McDonalds hoped to build trust and credibility
in a marketplace where bad press has followed them in the form of viral videos and unappetizing images.

McDonald’s eventually began disclosing the secret behind how the fast food chain’s fries are made.
They produced a video answering a series of questions about McDonald’s fries: where the potatoes
come from, how they are processed, what kind of oil they’re fried in, and why there is so much salt on them.

Mario Dupuis, a production manager at McCain Foods in New Brunswick, discussed where the potatoes are washed,
peel and cut. They are also blanched to “remove natural sugars” that would cause colour variations then
soaked in dextrose for an even colour. There’s also an ingredient to prevent greying, drying to remove
excess moisture and a quick-fry for 45 to 60 seconds before the fries are frozen for shipping.

The worst part are the ingredients. Instead of the standard two ingredients necessary to make french fries-potatoes
and oil, there are approximately 17 as reported on the ingredients facts list on the McDonald's website.

At a glance, many of the ingredients above are hazardous to human health, including those which are
genetically modified (canola oil, corn oil, soybean oil), hydrogenated (soybean oil), chemically preserved
and antifoaming (THBQ, citric acid, dimethylpolysiloxane), and artificially colored (sodium acid pyrophosphate).