Want to fight the cuts? Passive protests are not enough!

New leaflet about how the anti-cuts movement needs to be more militant, more inclusive, and more democratic... 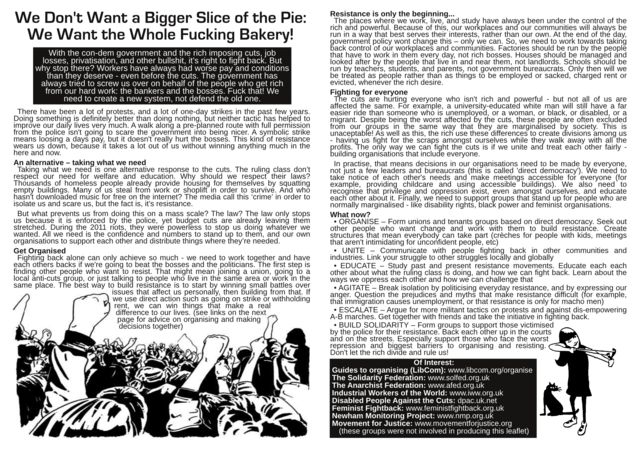 There have been a lot of protests, and a lot of one-day strikes in the past few years. Doing something is definitely better than doing nothing, but neither tactic has helped to improve our daily lives very much. A walk along a pre-planned route with full permission from the police isn’t going to scare the government into being nicer. A symbolic strike means loosing a days pay, but it doesn’t really hurt the bosses. This kind of resistance wears us down, because it takes a lot out of us without winning anything much in the here and now.

*An alternative – taking what we need*
Taking what we need is one alternative response to the cuts. The ruling class don’t respect our need for welfare and education. Why should we respect their laws? Thousands of homeless people already provide housing for themselves by squatting empty buildings. Many of us steal from work or shoplift in order to survive. And who hasn’t downloaded music for free on the internet? The media call this ‘crime’ in order to isolate us and scare us, but the fact is, it’s resistance.

But what prevents us from doing this on a mass scale? The law? The law only stops us because it is enforced by the police, yet budget cuts are already leaving them stretched. During the 2011 riots, they were powerless to stop us doing whatever we wanted. All we need is the confidence and numbers to stand up to them, and our own organisations to support each other and distribute things where they’re needed.

*Get Organised*
Fighting back alone can only achieve so much – we need to work together and have each others backs if we’re going to beat the bosses and the politicians. The first step is finding other people who want to resist. That might mean joining a union, going to a local anti-cuts group, or just talking to people who live in the same area or work in the same place. The best way to build resistance is to start by winning small battles over issues that affect us personally, then building from that. If we use direct action such as going on strike or withholding rent, we can win things that make a real difference to our lives. (see links on the below for advice on organising and making decisions together)

*Resistance is only the beginning…*
The places where we work, live, and study have always been under the control of the rich and powerful. Because of this, our workplaces and our communities will always be run in a way that best serves their interests, rather than our own. At the end of the day, government policy wont change this – only we can. So, we need to work towards taking back control of our workplaces and communities. Factories should be run by the people that have to work in them every day, not rich bosses. Houses should be managed and looked after by the people that live in and near them, not landlords. Schools should be run by teachers, students, and parents, not government bureaucrats. Only then will we be treated as people rather than as things to be employed or sacked, charged rent or evicted, whenever the rich desire.

*Fighting for everyone*
The cuts are hurting everyone who isn’t rich and powerful – but not all of us are affected the same. For example, a university-educated white man will still have a far easier ride than someone who is unemployed, or a woman, or black, or disabled, or a migrant. Despite being the worst affected by the cuts, these people are often excluded from our groups in the same way that they are marginalised by society. This is unaceptable! As well as this, the rich use these differences to create divisions among us – having us fight for the scraps amongst ourselves while they walk away with all the profits. The only way we can fight the cuts is if we unite and treat each other fairly – building organisations that include everyone.

In practise, that means decisions in our organisations need to be made by everyone, not just a few leaders and bureaucrats (this is called ‘direct democracy’). We need to take notice of each other’s needs and make meetings accessible for everyone (for example, providing childcare and using accessible buildings). We also need to recognise that privilege and oppression exist, even amongst ourselves, and educate each other about it. Finally, we need to support groups that stand up for people who are normally marginalised – like disability rights, black power and feminist organisations.

*What Now?*
ORGANISE – Form unions and tenants groups based on direct democracy. Seek out other people who want change and work with them to build resistance. Create structures that mean everybody can take part (crèches for people with kids, meetings that aren’t intimidating for unconfident people, etc)
UNITE – Communicate with people fighting back in other communities and industries. Link your struggle to other struggles locally and globally
EDUCATE – Study past and present resistance movements. Educate each each other about what the ruling class is doing, and how we can fight back. Learn about the ways we oppress each other and how we can challenge that
AGITATE – Break isolation by politicising everyday resistance, and by expressing our anger. Question the prejudices and myths that make resistance difficult (for example, that immigration causes unemployment, or that resistance is only for macho men)
ESCALATE – Argue for more militant tactics on protests and against dis-empowering A-B marches. Get together with friends and take the initiative in fighting back.
BUILD SOLIDARITY – Form groups to support those victimised by the police for their resistance. Back each other up in the courts and on the streets. Especially support those who face the worst repression and biggest barriers to organising and resisting. Don’t let the rich divide and rule us!

Please feel free to copy/re-print/plagiarize this article however you like.