A successful two hour long blockade of the Strand outside the London Royal Courts of Justice passed off without incident yesterday after disabled activists locked wheelchairs together with the support of UK Uncut activists. 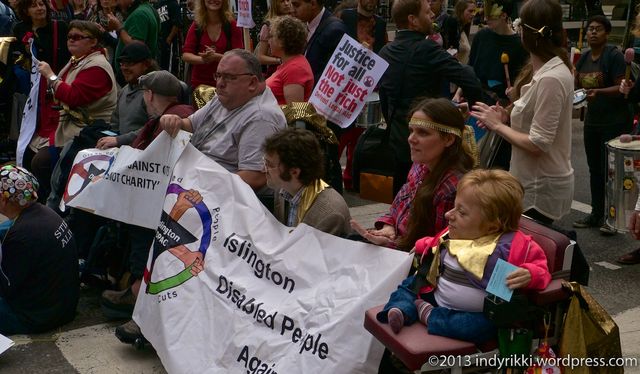 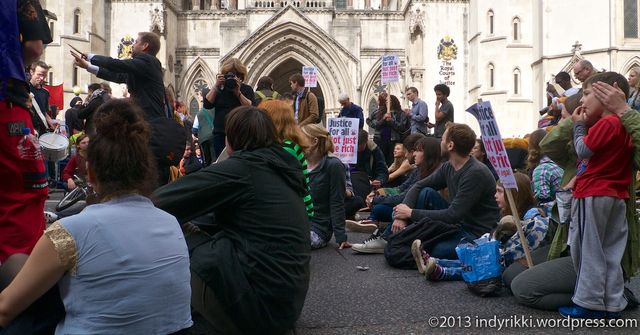 The meeting point for the London protest, part of a national campaign with actions in 7 locations yesterday, was the Old Bailey, where a crowd began to form from about 11.30, watched by some press, legal observers, and a few City of London police.

By noon, around a hundred people had arrived, and shortly after, a large “No Justice, No Peace” banner was unfurled, the Rhythms of Resistance samba band started up, and the march set off towards Fleet Street. More police quickly arrived and accompanied the protestors as they headed west.

Ahead, some DPAC activists wheeled their chairs across the road in front of the Royal Courts of Justice, locking them together, some women in gold attire blocked the westbound carriageway, and by the time the marchers arrived, the blockade was in place.

Police made no initial attempt to divert traffic, and soon, long tailbacks built up, including several buses. It’s tempting to suggest this was a deliberate attempt to cause maximum disruption, later useful to them if the police wanted to impose any Public Order conditions, but it was probably just ineptitude.

The crowd then filled both carriageways outside the Courts, with an additional row of bicycles laid out to add to the blockade, and many sat and listened to the sound system as a mock trial began, with Chris Grayling (the ex-management consultant with no legal training who has become the Secretary of State for Justice) in the dock.

“Witnesses” gave moving and personal examples of how legal aid (which will be severely curtailed in proposed cuts and changes to the justice system) had helped people in various serious life-changing scenarios in the past.

At about 12.30, City of London police moved through the crowd warning people that they were obstructing the highway and may face arrest. Also, some sort of announcement was made through a distorted loudspeaker from the Police vehicle, but at that point, people started chanting, and the samba band started up again, so I doubt anyone heard it clearly.

Meanwhile, decision-making seems to have been passed on to Met rather than City police, and at about 1pm, a Chief Inspector and some other cops made their way to the sound system and spoke with one of the facilitators.

This discussion turned into negotiations over the next hour. The CI was trying to get the protest to move onto the pavement outside the Court, and threatened that he was putting arrangements in place to do that using arrests and force if necessary.

From that aggressive starting position, he then tried to use some of the psychological techniques that have been developed over recent years in the use of Police Liaison Officers, although no PLOs were overtly used yesterday. He spoke of a ‘5-step plan’ to avoid arrest. This included handing out leaflets throughout the crowd warning of the unseen consequences of a criminal record and appealing to them. This is of course designed to undermine solidarity and split or diminish the crowd. As a couple of dozen Met Tactical Support Group police turned up and were placed in positions to further threaten the peaceful protestors, these ‘negotiations’ continued for some time during which it was clear that the police were seriously considering a mass arrest.

While all this continued at the side, the crowd had been listening to advice and info from Green & Black Cross legal advisors, as well as some conscious poetry and other entertainment.

As the blockade neared the two-hour mark, and with numbers diminishing somewhat towards a few dozen, the mock trial reconvened, Chris Grayling was found guilty, and then first one carriageway, under “gentle” persuasion from a couple of dozen TSG, followed slowly by the second, was cleared just before 2pm.
As the DPAC folk unlocked their wheelchairs and moved to the pavement outside the court, a big cheer went up, and the protest had passed off successfully with a two-hour blockade and no arrests.

Big respect for the young woman who bore the brunt of the “negotiations” and remained calm, focussed, and placatory despite the threats and who I’m sure helped keep the police at bay for longer than they otherwise intended.