PHOTOS from the event

End their Wars! Free our Prisoners! 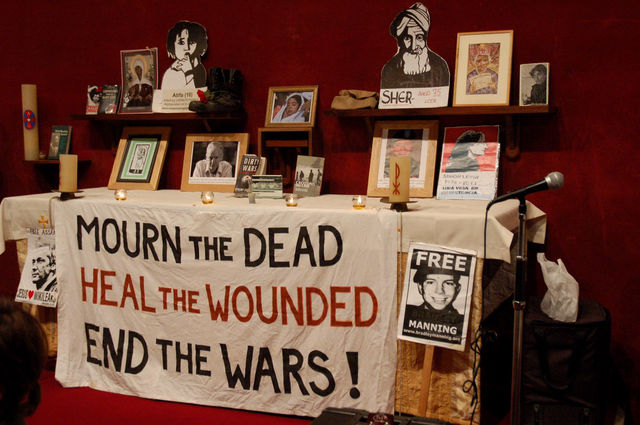 Mourn the Dead, Heal the Wounded, End the Wars 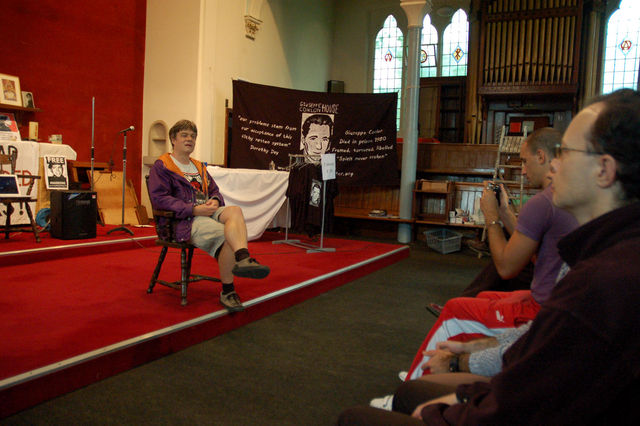 Andy Worthington speaks about the Afghan war and Guantanamo prisoners 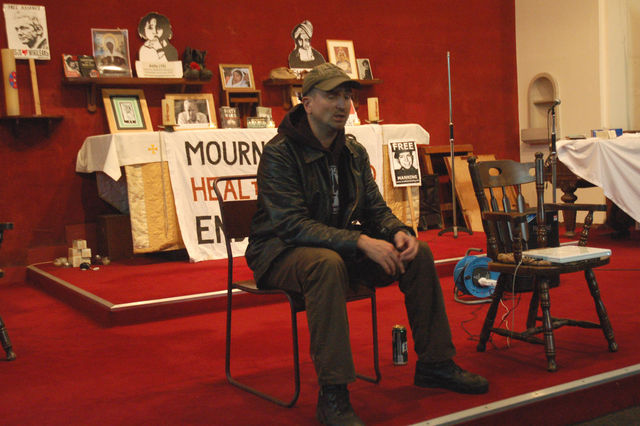 Guy Smallman speaks about his many visits to Afghanistan 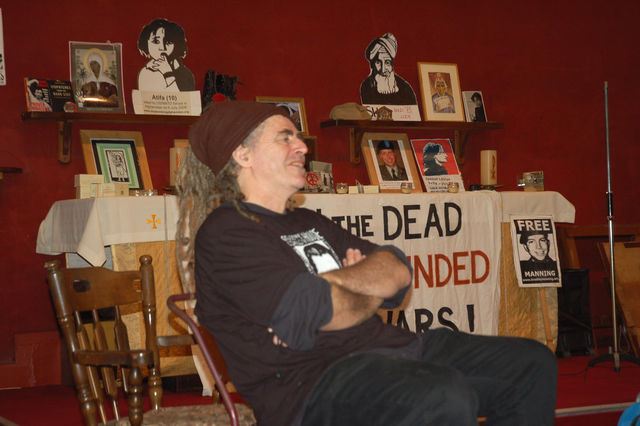 Ciaron O'Reilly talks about the Afghan war and nonviolent resistance 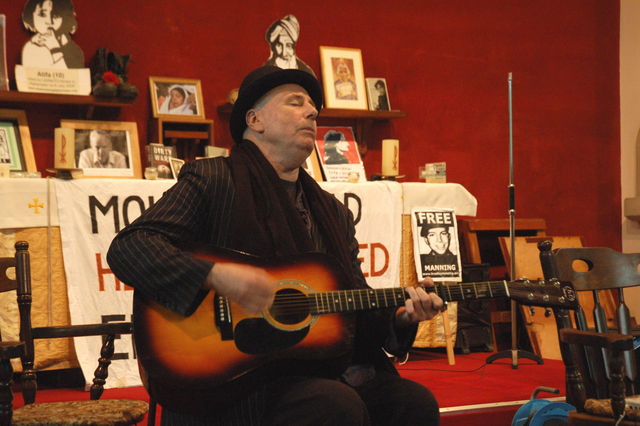 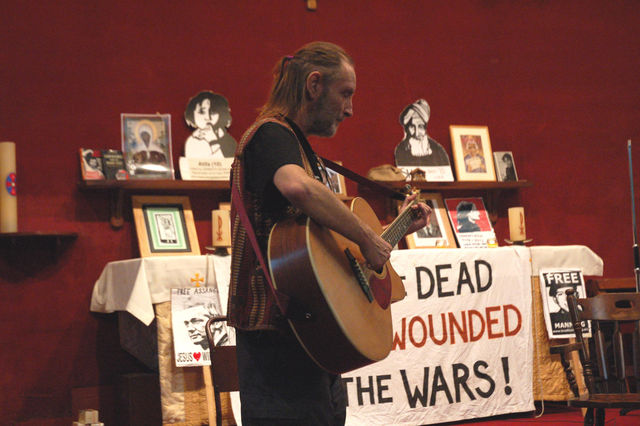 Razz sings and reads poetry including that of Victor Jara

Speakers, musicians, anti-war activists, former political prisoners & a British Army veteran were among those who marked the anniversary at a public event on Sat 5 October at the London Catholic Worker's Giuseppe Conlon Hall in Harringay.

The event was addressed by:

PFC Manning who has been sentenced to 35 years for exposing the war on Afghanistan and Julian Assange presently surrounded by London Metropolitan police were remembered throughout the evening.

In the early weeks of the 2001 invasion of Afghanistan, the fledging London Catholic Worker group were addressed in Highgate, London by radical theologian Ched Myers (see "Binding the Strongman",& "Who Will Roll Away the Stone?", Orbis Press, U.S.) Weeks later, Scott Albrecht, Sr. Susan Clarkson & Ciaron O'Reilly were arrested for using red paint to transform the entrance sign to Northwood HQ -
command centre for all British forces deployed overseas.

During 2001 the Giuseppe Conlon squat involving Eric Benner, Karen Fallon & Ciaron O'Reilly operated in a flat above Sr. Susan Clarkson's place in Holloway. Some of the flats were rented, others squatted by Brazilian cycle couriers, nesting pigeons & this small group of CWs. Extension leads were utilised to run electricity from Susan's apartment.

In 2002, Sr. Susan Clarkson travelled to the United States for formation in Catholic Worker tradition & praxis. Susan was later involved in "The Riverside Plowshares" action addressing an Aegis Cruiser docked on the Hudson River, NYC. The ship had fired the opening shots during the invasion of Afghanistan.

Ciaron had established a weekly anti-war vigil at the GPO, O'Connell St. with a U.S. student Michaal Schorsch, a former high school student of Kathy Kelly. On Michael's return to the U.S. he joined the South Bend CW near Notre Dame and worked for many years for G.I. Hotline

http://girightshotline.org/en/ The weekly vigil was followed by a liturgy in the Ballyfermot CW house.

At a public talk they gave on their return to Dublin in early Nov 2002 they met Deirdre Clancy. On Nov 16th Ciaron met Damien Moran at a solidarity vigil at Dublin's U.S. embassy Ciaron had initiated in solidarity with 20,000 people taking action at the School of the Americas" Ft. Benning, Gerogia, USA.

At this time Karen Fallon, who had lived at the Giuseppe Conlon Holloway squat, visited Ciaron in Dublin. On New Years Day Nuin Dunlop visited the Ballyfermot CW house.

Charged with criminal damage of $2.5 million + 100 euros (for the hangar window) they were initially held in Limerick Prison and later
released at various stages under harsh bail conditions. They were under bail conditions for 3.5 years as they endured three trials before they were unanimously acquitted in August 2006.

Around August 2006, the London Catholic Worker - that had for the previous years met fortnightly to reflect and pray, plan nonviolent resistance to the preparations for war - gained its first infrastructure to explore hospitality.

The London Catholic worker was preceded by the Oxford Catholic Worker in the early 1990s. It was a community that Susan Clarkson joined on her return from the United States and where she continues to live and work.

The Liverpool Catholic Worker (began 1996; evicted '99) had preceded the formation of the London cell along with a short lived Giuseppe Conlon squat in Holloway (2000). The Liverpool Catholic Worker that provided hospitality to East Timorese refugees who had occupied embassies in Djakarta & sustained nonviolent resistance to BAe's arms exports was infiltrated by a BAe spy "Alan Fossey" and was evicted in 1999. "Fossey" had been deployed from where he had previously operated in Hull to Liverpool for the "Seeds of Hope Ploughshares" trial in July of 1996.
VID

The trial support and acquittal of the Seeds of Hope initiated the experiment with CW praxis in England in modern times.