Yesterday’s ‘March against Monsanto’ was organised by www.gmfreeze.org, and was part of a global action with events in around 400 cities around the world. The march from Temple station ended in a very informative rally outside Parliament in Old Palace Yard. 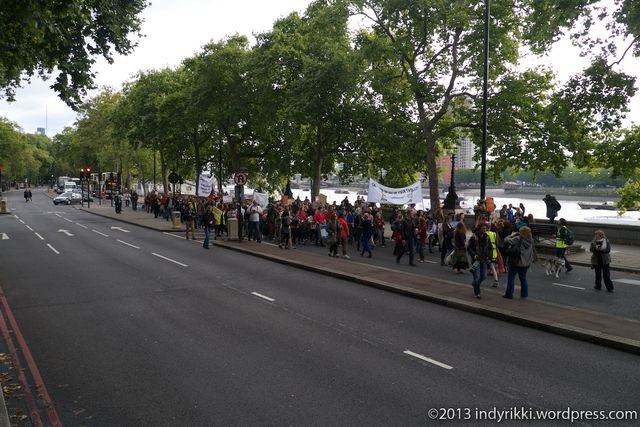 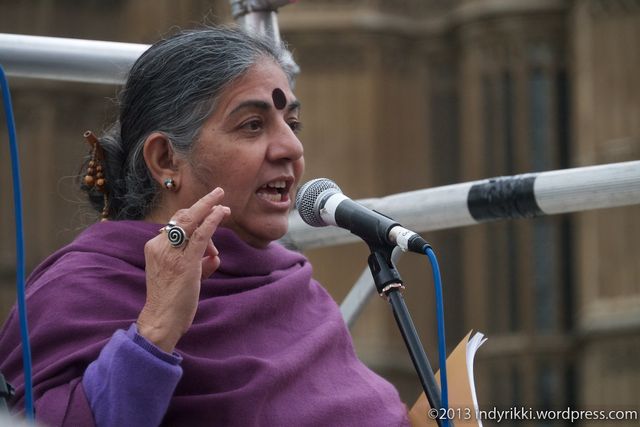 Activists began congregating outside Temple station from around midday yesterday, and by one‘o’clock, there were more than two hundred people sporting a variety of costumes and banners. A handful of volunteer stewards and the Rhythms of Resistance samba band then led the protest across the Embankment and on to the westbound carriage, where they took over the road and walked without hindrance or help from any police.

Turning right, the crowd made its way up to Trafalgar Square and then into Whitehall, where once again they took control of the southbound carriageway, pausing briefly and noisily outside Downing Street, and then on to Parliament Square. After about an hour in total, they arrived at their destination, Old Palace Yard, where a small stage and sound system had already been prepared.

In glorious sunshine, there were then a succession of speakers, musicians and poets to inform and entertain over the next couple of hours.

http://www.gmeducation.org) spoke of the urgent need to spread the word and educate others about the many issues arising from genetic modification. While polls regularly report that citizens in many countries are overwhelmingly opposed to GMOs in the food cycle, there is a surprising lack of awareness about the extent of the problem, and little active resistance in many western countries, especially the UK, where apparently MPs are receiving virtually no mail on the subject, and some people think Monsanto is the name of a racehorse, or an Italian footballer.

Speakers from the ‘london freedom seed bank’ reminded us that while nature is, by nature, abundant, scarcity is a valuable construct of big business, and much better for profits. A single plant will organically produce tens, hundreds, or in some cases thousands of seeds, so learning to harvest, share and grow these seeds can provide an almost limitless source of cheap foods. Contrast this with the ‘terminator’ seeds from Monsanto, which carry a huge royalty rate in their cost, and which produce plants that don’t give back free next generation seeds, then add in the emerging issues of cross-pollination, low yields, mono-culture imbalance, aside from the possible long-term effects on health, and it soon becomes clear that GM is a disaster for mankind, wreaking havoc in the pursuit of corporate profits.

http://waronwant.org spoke about food sovereignty, with most of our lands owned by a handful of super-rich, and trade agreements skewed towards multi-national corporations and against small farmers. She also informed us about attempts to legally protect and support GM through “bio-technology harmonisation”. The EU is currently proposing legislation that will lead to a requirement for even the smallest of seed producers to register, potentially criminalising bio-diversity, and handing over seed monopoly to corporations. There is more info and a petition at

http://seedfreedom.in) spoke of the genocide occurring in India as the imposed use of Monsanto’s Bt cotton spreads, causing lower yields, higher costs, and directly leading to an absolutely massive increase of suicides among rural farmers – she estimated more than 200,000 such suicides could be attributed to the introduction of Monsanto’s products.

Dr. Shiva also spoke about the myths surrounding any benefits of GM, citing that, far from reducing the use of pesticides, as the proprietary ‘RoundUp’ spray fails to work, Indian farmers growing Bt cotton are now resorting to Agent Orange!

Other speakers described how studies show that yields are actually diminishing, not increasing, and the toxins built into the GM plants and designed to kill or repel pests are only partially effective, leading to enormous problems. For instance, in the US, while the toxin is only partially effective on corn bollworm, it’s more effective on the bollworm’s natural predator, the armyworm, so pest damage is actually rising, leading to the need for extra tilling, and the use of greater amounts of soil insecticides.

The American increase in biotechnology use is having a negative impact on productivity and sustainability, and the annual decrease in yield then has a further amplified influence because current capitalist economics lets traders speculate on food prices which can throw hundreds of millions of people into food poverty at the stroke of a computer key.

A final note - although GM crops represent a tiny proportion of world farming, there is the very real danger of cross-contamination. A recent German study (TestBiotech) has shown transgene contamination of wild plant populations, probably impossible to control in future, and has found GM DNA in the environment that has never even been authorised for release.

The march and rally was part of a 400 city global action yesterday. There was virtually no coverage of the London event in UK mainstream media.

Further info can be found at the following websites: