How Innocent Birds Are Treated In Many Factory Farms 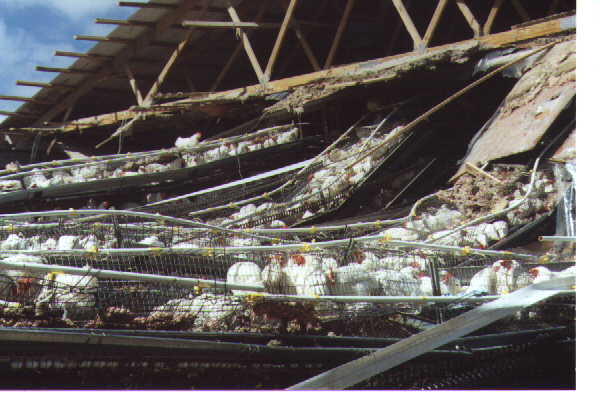 Birds Smashed At What Is Now Ohio Fresh Egg


A tornado ripped the roofs off of the metal sheds in the United States at then Buckeye Egg Farm*, now Ohio Fresh Egg. One million birds were exposed... one half million died shortly... perhaps 100,000 were rescued.by animal rights groups from Ohio and other states. At least 400,000 were bulldozed ALIVE into graves, AFTER NINE DAYS WITHOUT FOOD AND WATER.

The owner of Buckeye Egg Farm had been banned from factory farming in Germany because of the use of nicotinoid insecticides lethal to human beings, and because of animal cruelty.

The Republican governor of Ohio saw it as an opportunity to welcome him with a red carpet to start his human poisoning, animal cruelty, and environmental pollution in Ohio.

This corporation has been sued for using 6 month old eggs, for using child labor, for creating such a cesspool of chicken waste that Ohio Wesleyan University studies found it had filled neighboring rivers with salmonella. Flies, divinely appointed waste removers, multiplied in the millions. One individual sank to her neck in chicken waste and her life was saved by grabbing onto the pipes overhead.

* It was renamed Agrigeneral and then renamed again Ohio Fresh Egg.

Other factory farms routinely have power outages during which the metal shed housed chickens roast or freeze alive. Chickens are painfully debeaked with searing machines so that they will not peck each other from the overcrowding, 9 or more chickens to a cage 1 foot by 3 feet. Representative Steve King of Iowa wants no one to tell chicken abusers what size their cages should be.

Eggs have 250 to 300 milligrams each of cholesterol. When a chicken has leukemia which profiteers disguise with the name leukosis, it is transmissable to human beings who eat the chickens. The uric acid or trioxypurine in chickens causes arthritis.

There have been many reports of these innocent birds being skinned alive in slaughterhouses.

CALIFORNIA
30,000 baby chicks
were sent through a San Diego
factory farm chipper
by workers too tired to continue
individual strangling.
The chipper became a chicker

CONNECTICUT
In Connecticut, Michael Ross
who strangled 8 women was
executed..
.. his history included as a 6 year old
boy being required to strangle baby
chicks on his father's poultry farm

OHIO
At a factory farm in Croton,
after nine days without food or water,
one half million chickens were bulldozed
alive into graves after a tornado
destroyed their metal shed and mangled
their cages..

ARKANSAS
In Arkansas, a million chickens
died as the electricity went out
and the metal sheds become
140 degree ovens. Whenever
electricity goes out, deaths from
freezing or baking occur to the
helpless birds.

IOWA
Mercy For Animals has
a video of baby chicks
sent alive down a conveyor
belt to be crushed into paste.

PENNSYLVANIA
Cars are lined up behind
a chicken truck.. chickens
crammed into crates
their broken necks and wings
flapping in the wind.

In North Carolina and factory
farms around the world,
these concentration camps
dump animal waste and
insecticides into the
world's waters.

SOUTH CAROLINA
Chickens are fed back
the boiled feathers of
their slaughtered sisters.

TEXAS
Chickens are fed
as elsewhere.. the
waste of animals
mixed in with grain.
It is called wastelage.

OHIO
An EPA worker sank neck
deep into quicksand like chicken
waste. Her life was saved
as she grabbed onto pipes overhead.

TENNESSEE:
Chickens are debeaked
so that they will not peck
each other to death from
the overcrowding.. sometimes
catches the chicken's tongue
in the debeaker.

MARYLAND:
At some factory farms
an eviscerator is used.
It is a bin of swirling knives
into which baby boy chicks,
redundant, are sent.

CALIFORNIA
In Petaluma
Chickens live their entire
lives without spreading
their wings.. or taking
a stretch.

MASSACHUSETTS
Every egg served in a hospital
is 275 mg to 300 mg of
cholesterol.

MINNESOTA
Fixing eggs for her family
a housewife sees a skillet
full of beaks, claws,
and blood.. from fertilized
eggs.

ARIZONA
Chickens pass on cancer
.. leukemia.. it is called
leukosis by human chauvinists
when a chicken has it

NEW MEXICO
An old man lies in pain
with arthritis, as uric
acid or trioxypurine from
a chicken's flesh has
crystallized around his joints
in needle formation

INDIANA:
Forced molting causes
many chickens to die
of exposure to the cold.

VERMONT:
The use of female hormones
in the food and the
constant stress from living
in 24 hour a day light
and crowding.. create cervical, breast,
uterine, ovarian and prostate cancers

WASHINGTON DC:
Easter chicks for protection
are ignorantly taken to
the zoo.. and are fed
behind the scenes to snakes

WASHINGTON
The USDA records a fraction of
food poisonings,97% of which
are caused by animal products

VIRGINIA
and 3 other states shut down chicken
slaughterhouses in latter 2003
because of declining command.

PENNSYLVANIA
As a young girl begins to bite
into a chicken sandwich her mother
is forcing her to eat, a rooster
crows. She puts down the sandwich
and never eats a chicken again.

CANADA:
Power outages cause
chickens in winter
to freeze to death
in their metal death boxes.

UTAH:
A woman neighbor to a factory
farm said the chickens she
raised used to sing when
they were given fresh straw.
The chickens she lives near
she says.. never sing.

GERMANY
A man is barred from
farming because workers
in his chicken factory farm
nearly died from his illegal
use of nicotine insecticide
and because of his cruelty to
animals.

Chinese government
worked to double egg production
which required the grain of
18 countries.

The following is from Mercy For Animals

In November 2004, Mercy For Animals investigators went behind the closed
doors of Ohio Fresh Eggs, formerly Buckeye Egg Farm, in Croton, Ohio and emerged
with shocking video and photographs that revealed the typical conditions inside
a battery cage facility.

Hens with broken, damaged, and feces-covered feathers packed into battery
cages so small they cannot spread their wings.
Hens whose beaks had been painfully seared off with a hot blade.
Hens suffering from bloody open wounds and untreated growths and infections.

Hens who had become immobilized without access to water when their wings,
head, neck, or feathers became trapped in the wire of the cage.
Corpses left to rot in cages with birds still producing eggs for human
consumption.
A hen with the skin of her neck pierced by a piece of sharp wire on the top
of her cage. The hen's skin is shown slowly ripping off as the other hens jostle
against her.
A live hen in a trash can, left to die among carcasses.

The cruel conditions uncovered at Ohio Fresh
Eggs are, sadly, all too common. Over a dozen undercover investigations at egg
farms in Ohio, Maryland, Minnesota, and New Jersey have all uncovered similar
abuses. These facilities are not "bad apples", but rather they represent
accepted practices within the egg industry.