Vigil outside the Wales vs USA match at Wrexham Racecourse, Mold Rd, followed by Social nearby in the afternoon.

Join us at Bristol Crown Court where a police prosecution over display of FREE MANNING banners continues. 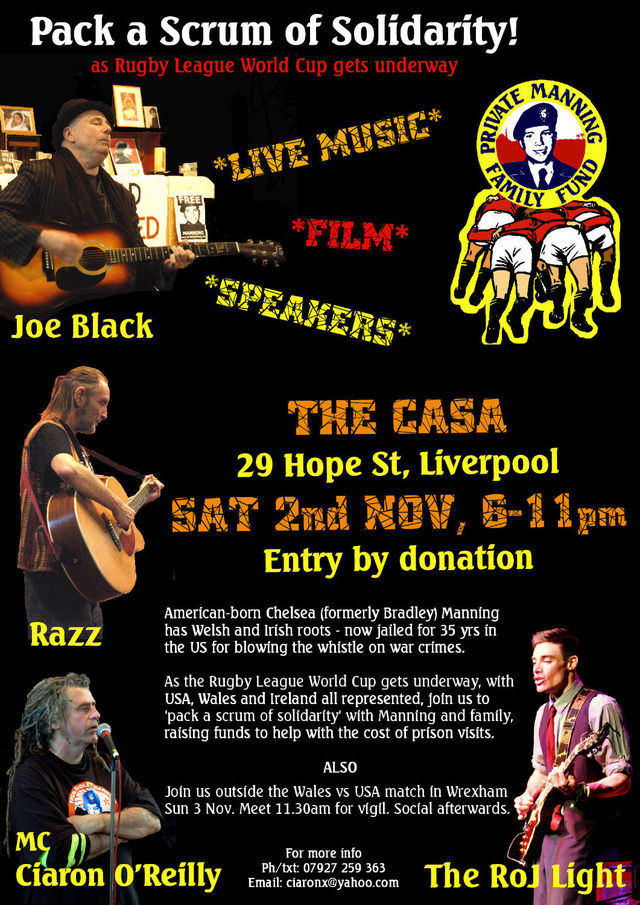 Chelsea Manning (formerly Bradley Manning) is held in a US military jail at Fort Leavenworth, Kansas, serving a 35 year sentence for blowing the whistle on war crimes in Iraq and Afghanistan, providing hard evidence about the nature of the wars being fought in our names, the 'war on terror' and US interference and intervention around the globe.

American-born Manning has family in Wales and family connections with Ireland.

Manning was a teenager attending school in Pembrokeshire when the invasion of Iraq began in 2003, was 22 when arrested, was held for over three years without trial and subjected to inhuman and degrading treatment condemned by the UN Special Rapporteur on Torture, Amnesty and many others.

As the Rugby League World Cup gets underway with USA, Wales and Ireland all represented, join us to 'pack a scrum of solidarity' with Manning and family.

At The Casa, 29 Hope Street, Liverpool.
Entry by donation

Join us for an evening of films, live music and speakers. MC Ciaron O'Reilly, international anti-war activist and former prisoner of the US, will introduce film clips of Manning solidarity actions from the past three years and a film about the 'Seeds of Hope' Ploughshares trial. A Liverpool jury acquitted four women who disarmed a Hawk fighter jet bound for Indonesia to be used against the people of East Timor, accepting their defence that they had acted to prevent the crime of genocide.

Live music will include performances by Joe Black and The RoJ LiGht (over from Dublin) along with poet and musician Razz (from London).

Wrexham is hosting the Rugby League World Cup match between Wales and the USA. Join us outside the Racecourse on Mold Road, where we will hold a vigil for Manning until kick-off. We aim to raise Manning's profile here in Wales, raise awareness of Manning's plight and encourage people to donate to the fund that's been set up to help Manning's Wales-based family with the cost of prison visits.

BRISTOL: MONDAY 4 NOVEMBER from 9.30am

Join us at the Crown Court, Small Street, Bristol for the next hearing in the case brought by the police against Manning supporter Genny Bove for putting up solidarity banners on a footbridge in Bristol in the run up to Manning's trial last May.

DONATE TO THE MANNING FAMILY FUND

100% of donations made by bank transfer or cheque will go to the family.

PLEASE RSVP RE. ABOVE EVENTS

N.B. It's not essential that you RSVP, but it helps organisers plan.