The PDF version of “Return Fire” volume 1 is now hosted online by 325.nostate.net and volume 2 is in the works. 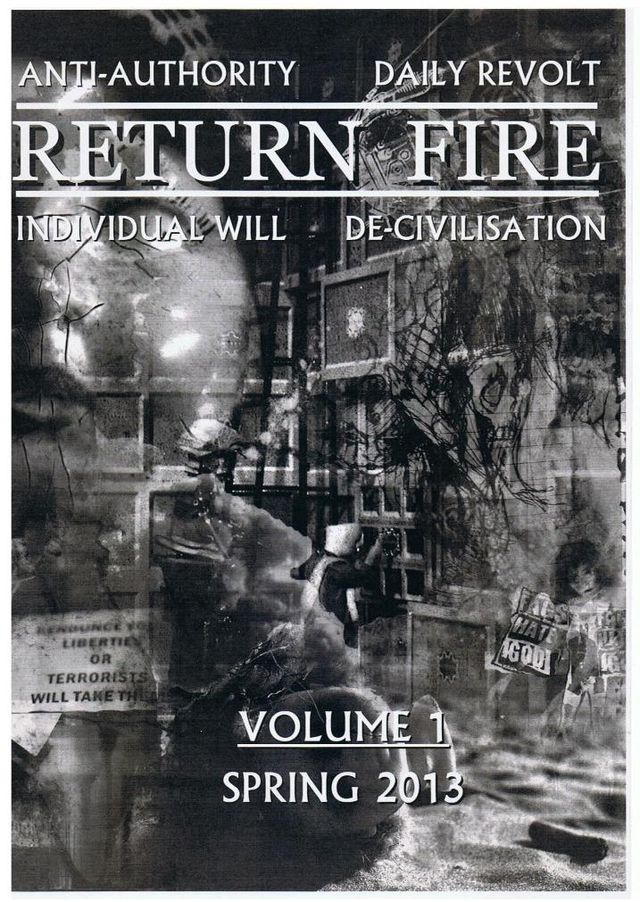 Our new zine Return Fire is now available. It's a diverse mix with liberatory aims, which we hope to be informative and inspiring for anyone who decides to make their life a weapon against the dominant order.

We present fresh content such as the new anti-psychiatry piece Fucked Off Not Fucked Up by V.Q., updates on modern surveillance and alienation (New Technologies, New Control), an article situating the ongoing Sealife Deformities from the Gulf of Mexico Oil Spill within the industrial catastrophe everywhere, and 'The State Always Has a Conspiracy... Have You?' from some U.K. irreducibles on refusal, illegality and attack, and more.

The zine includes the full-length pieces Fukushima's Fallout On My Soul, Alex Gorrion examining the anti-social tension in We Want to Be Great Like Our Crime through reviewing Isabelle Eberhardt and Renzo Novatore, an English version of the claim by an 'International Revolutionary Front' cell taking responsibility for the Vehicle Bomb at the Headquarters of Microsoft, Athens, during June 2012, the classic critiqué Nature as Spectacle, and Auschwitz-Disneyland translated from the French-language journal La Mauvaise Herbe.

We've also reproduced excerpts from others texts we consider valuable. These include parts of the founding statement by 'Cultural Terrorists' of the ASIF subversive women's group (on surrealism and the rejection of forced femininity) along with other historical pieces of interest, considerations on informal anarchism and 'The Organised Minority Structure' by the then-captives of the 'Vyrona 4' case, thoughts on the anguish of romantic co-dependency in 'Can't Live Without You', anti-prison polemic 'An Hourglass That Kills Slowly' by Random Anarchists in London, observations on the reduced capacity for autonomy under mechanised life ('The Loss of Competence', by Crystalised Ginger), alongside selected other words that recently came out of the U.K...

...As well as many more articles, imprisoned but undefeated voices from Rebels Behind Bars, snatches of Poems for Love, Loss & War (from V.Q., Claudia López, Severino di Giovanni and more), information on Wild Plants for edible and medicinal purposes, and scattered news and communiqués from the Global Flash Points of radical action from the winter of 2012-2013.

We hope that the intent throughout is as clear as we intended: that is, against civilisation and domination, for anarchy and wildness.

Open this link for a PDF file of the editorial piece alone: