Say “No” to the Israeli sponsored film festival

On Saturday evening 2 November, protestors gathered outside as the Tricycle opened an Israeli-sponsored Jewish film festival. 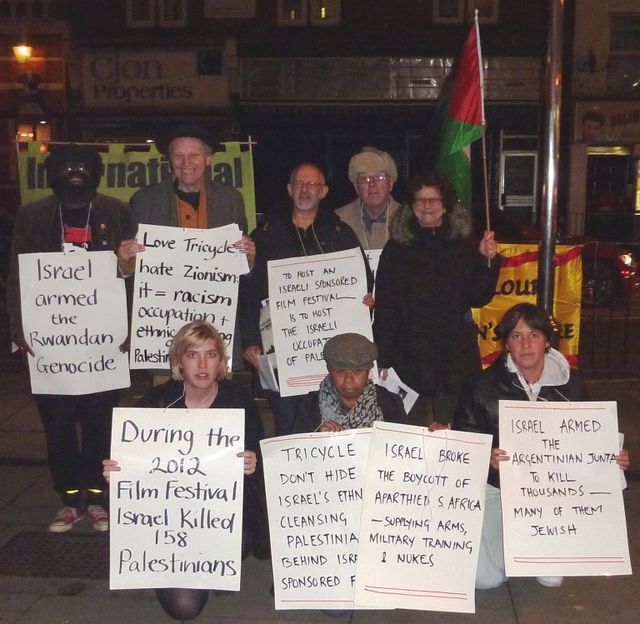 The lively and colourful protest was called by the International Jewish Anti-Zionist Network, in response to the Israeli Embassy’s sponsorship of the Tricycle’s Festival. People from different faiths and none, including an Israeli activist, Palestinian solidarity activists, and campaigners from the Kentish Town-based Global Women’s Strike, came together to remind the Tricycle that at the very same time that they hosted the festival last year, Israel was bombing Gaza, killing 158 Palestinians; including 30 children.

Protestors, who have valued the Tricycle for decades through its vitally informative and entertaining plays about Afghanistan, Ireland’s Bloody Sunday, US Guantanamo, the Stephen Lawrence Inquiry, and more, are appalled at the Tricycle hosting a film festival sponsored by a government that whose major industry is repression, not only of Palestinians but around the world.

With placards and a loudspeaker they highlighted that Israel had broken the international boycott of apartheid South Africa – supplying it with military hardware and training, and helping build its nuclear industry; had armed the Argentinean junta even as it killed thousands, including many Jews; had helped arm and train the Rwandan military and Hutu militia which committed genocide against the Tutsis; and helped arm the Sri Lankan government with warfare technology, including drones, enabling it to massacre tens of thousands of Tamils.*

Protestors were shocked that the Tricycle was not only using security guards who refused to identify themselves, but also that a vanload of police had been called on an entirely peaceful protest. The protestors, who are mainly local residents and the Tricycle’s most loyal audience, have written to the new artistic director of the Tricycle, Indhu Rubasingham, to say: “Given that Israeli apartheid is not loved, especially in multi-racial Kilburn . . . Is this who the Tricycle wants to be associated with?

They also ask that the Tricycle to do what it says it does: bringing unheard voices into the mainstream. That is, to take a stand for justice and peace and against repression. They see the Tricycle’s association with Israel as a betrayal of this standard and are set to do another protest on the evening of 13 Nov – when a film sponsored by the Zionist Federation about Herzl (the founder of modern Zionism) will be shown.